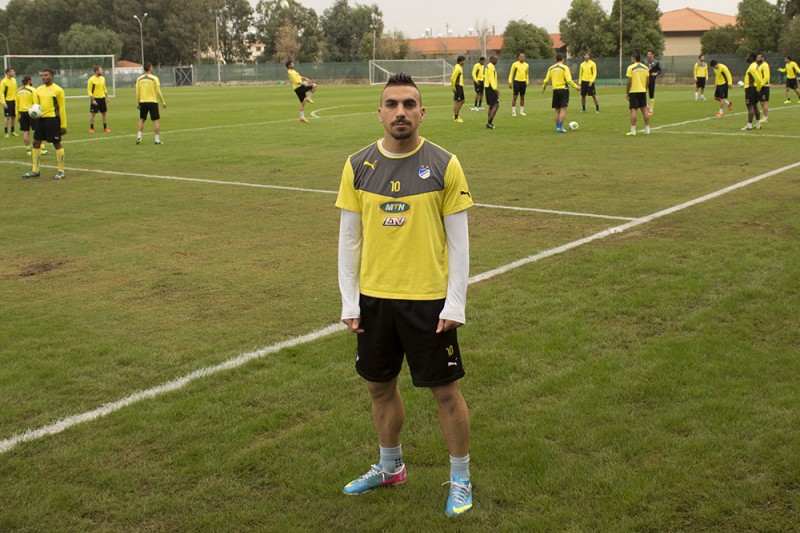 A very white, very expensive Mercedes slowly drives into the car park and stops; the driver gets out,  gives his girlfriend a kiss and the steering wheel. As she drives away, he walks the last 50 metres past some Porsches, Land Rovers and SUVs, casually high fives a grounds man and enters the dressing room. This is the training complex of Apoel Nicosia, this is the life of a football professional. Apoel is the country’s leading club; a 22-time champion, it often plays in the Champions League, even reaching the quarterfinal in 2012.

‘You can speak to Constaninos, the captain, for 10 minutes,’ the team manager had said. The walls of his small office are hung with pictures of himself standing next to football celebrities such as Iker Cassillas and Jose Mourinho: the manager looking proud while the celebrities look the other way.

Constantinos hasn’t arrived yet, so I wait in the relaxing room, next to the dressing room. Two Brazilians, probably injured, are watching a match on Eurosport.

Then finally Constaninos arrives: ‘I only have two minutes,’ he says, like a true local celebrity. He’s quite small, especially compared to the blow-up of a photograph of him shaking hands with John Terry, the Chelsea-captain, just before kick-off.

I start with ‘What does the European Union mean to you?’
‘I’m a big fan. I like travelling; I like being part of something bigger instead of just being from a small independent island. And though it has brought us some disadvantages, it has big advantages for each European citizen and even for the development of mankind.’

He says this without hesitation, almost without thinking, professionally waiting for the reporter to write down his answer. Another Brazilian, this one wearing slippers, enters the room, lazily high-fiving his captain and his countrymen.
Constatinos continues: ‘For me as a football professional it has made it easy to work in Greece where I played for PAOK and in Germany, where I was at Carl Zeiss Jena. It’s good to open the borders: more experiences, more opportunities. But yes there are also disadvantages: foreign players from countries such as Portugal, Brazil, Argentina, come to work in Cyprus, taking the place of Cypriot youth players.’ In the starting team there are only 4 or 5 Cypriot players.
‘From a young age it was my dream to become a professional football player, and I had been visualising playing for Apoel, I saw myself in yellow and blue, the Apoel colours.’

‘What’s the next dream?’
‘To qualify with Cyprus for the World Cup. And for the future I hope to do something football-related, as a coach or something.’

My time has been up for several minutes , so I walk with him to the training pitch.

‘What’s it like being famous? Everybody on the island knows you?’
‘Ah, it means nothing to me. I’m a family man, I have my kids and my wife, a quiet life. I never drink.’

‘But does it bother you when people ask for an autograph?’
‘No, it’s always welcome; maybe sometimes people are a bit rude. I can manage that.
Cyprus is a small island, everybody knows what you’re doing. Have we finished?’
We have.