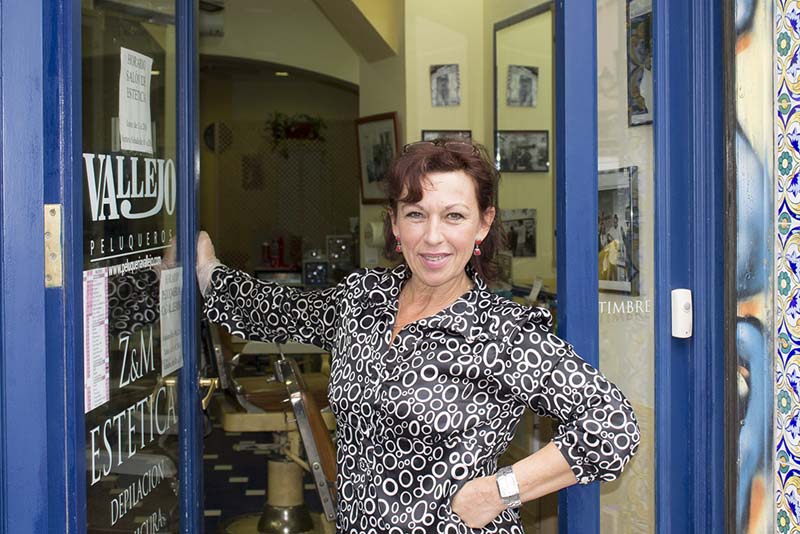 She runs the oldest barbershop in Madrid, founded in 1908. ‘One is older, by 8 years. But it has not been in the same family,’ Elena says. She and her brother, and one employee, now work in a beautiful old shop decorated with antique mirrors and elegant wooden chairs.

‘Will they come work in the shop?’
‘No, I don’t think so. I think the shop will end. Because my brother doesn’t have children either. But maybe they will change their mind: it’s crisis after all and there’s so much unemployment.’

Elena is about 50, petite and with the temperament that is said to be characteristic of redheads, especially Spanish ones (although I can’t be sure if it’s her natural colour – she is after all a hairdresser). There’s a bandage and a plastic bag around her hand and wrist. ‘Car accident in Morocco, a month ago,’ she says.

‘What about you, was it logical to become a hairdresser or have you ever considered doing something else?’
‘First I worked in an office. But when I lost my job, I sort of had to. The only thing was that then it was a shop for gentlemen only, and therefore there were no women working here. On top of that it was a barbershop: we cut beards and moustaches, and I was afraid of that; I didn’t like the raspy sound. We did it with knives of course, and also shaved scalps. The shaving cream dried very fast, so you had to cut fast, and I was afraid of making mistakes. People who came here often had their own knives; we kept them for them. There, you can see it in the picture. In a wooden box. Now we don’t use knives anymore, because of new regulations, because of AIDS. We use disposable knives.’

Elena’s shop is in the middle of Lavapies, a rough area that is now becoming more and more bohemian. ‘Has the barrio changed a lot?’

‘It has improved a lot. It used to be rough, with junkies, hookers and criminals. There are a lot of immigrants now, but they are very well assimilated. We used to have loads of South Americans, who caused problems, even though they speak Spanish and share the same religion, but now it’s Pakistani, Bangladeshi, Africans and Chinese who run all the little shops.’ She describes a square, right around the corner. ‘I couldn’t walk there at night, I’d be harassed. Now it’s safe.’

‘Can you do African hair?’
‘No, and they don’t come here. They choose a hairdresser from their own group; Chinese go to Chinese, Moroccans to a Moroccan hairdresser. These guys don’t pay taxes, everything is done black, they live in their own shops: I couldn’t compete with them, but I fortunately I don’t have to: I have my own customers.’

‘What do you like most?’
‘The contact with my customers.’ Of course. ‘I’m almost a psychologist. We only cut men’s hair. Many of them are regulars and I know them well, I know their families. You know, people talk, but don’t listen; they want to tell their stories. It’s a one way conversation. I only have to say yes or no, at the right moments.’

‘The way men usually have to listen to their wives,’ I say.
‘And the funny thing is that the men are very nice about their wives, they listen to what their wives say: “I’d like you to cut it like this, here a bit longer, there shorter.” At home they don’t listen to them, I suspect, but here….’

‘What is your status? Assuming the king is at the top of the ladder, and the criminal on the lowest rung, where are you?’
‘Somewhere in the middle.’ She laughs. ‘But I don’t think a lot of the king, we’re republicans!’

‘Is the country well governed?’
‘No! Even if we get out of this crisis, it will not be thanks to the government, but due to macro-economic circumstances. We were deceived by the prosperity and apparent growth and now we are thrown back into reality. Politicians must have known that this would happen. They should have warned us. But they didn’t because some people only got richer. The younger generation is in trouble: 45% is jobless. And they will have to work till they’re 70.’

‘What do you think of European government?’
‘It’s horrible. This Miss Merkel is destroying us, with all these cuts. It’s a policy that doesn’t work in the long run. It helps to make labour cheaper, but for the people it’s horrible.’

‘What would work?’
‘Well, not to have common politics, but for every country to decide for itself. The countries are different, the people are different. We don’t live the same way.’

Don’t you think it would be a good idea to unite, so we could form a strong block against China for example?’
‘That sounds nice, but if ordinary people don’t feel that, how can it work?’

‘Do you like Europe?’
‘Si! A lot. I love the people, to see how they are. Italy, Holland, Hungary. Modernisation came late to Spain, later than in other countries, so I’m really interested to how people do in these countries.’

‘Do you feel European?’
‘Yes, but first Madrilena, then Spanish, and then European.’

‘Do the customers talk about Europe?’
‘Not about the crisis. But they talk about it when they talk about emigrating. To Berlin for example. But not that many people can: we are raised with the idea that you should own your own house. That sounded nice, but it now it means that it isn’t easy to move. ’