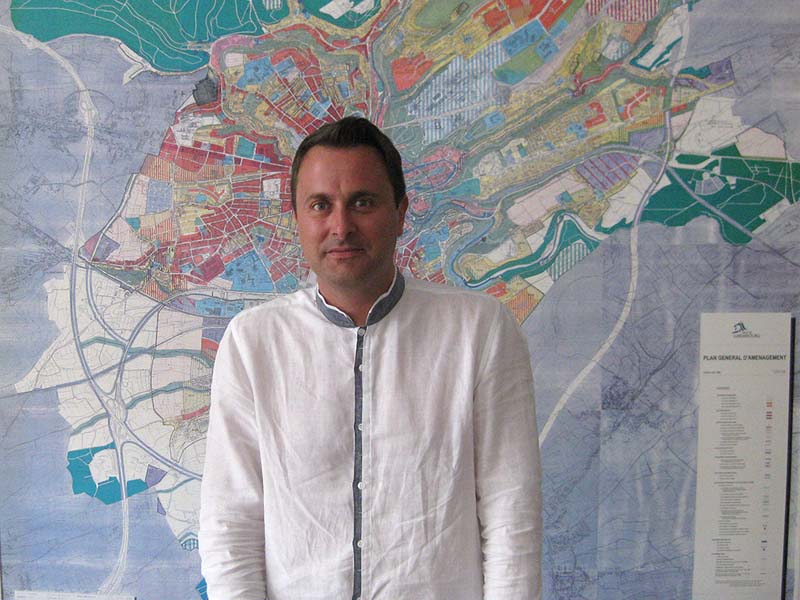 A group has gathered on the marble steps of the town hall at Place Guillaume II. Six or seven high heeled-women, in a cloud of expensive perfume, and six or seven men in suits and shiny shoes, the soles of which indicate that they are brand new. They’re waiting for a couple to arrive to get married, the receptionist tells me.

Upstairs Xavier, the mayor, welcomes me, and walks me to his room. ‘I only have 25 minutes, because I’m having lunch with my mom and sister.’

I explain the concept of the book, telling him he’s the local celebrity.

‘Not the prostitute?’ he asks.

‘Well, are you the prostitute as well?’
‘No, sorry, no time,’ he jokes. The mayor is only 40, openly gay and quite flamboyant.

He started politics when he was 15, when he was elected class delegate. A few years later he founded a student union, and he entered parliament at 25. ‘And I became the mayor by accident, only because I had more votes than the number one on the list, who was from my party too.’

I’m not too sure about that.

‘Maybe that’s the difference then, because if other politicians don’t play a role they come across as stiff and formal and you’re obviously not.’

He is wearing a blue and white buttonless shirt, and almost lying on his couch.  Two big pop-art paintings hang on the wall above the couch. ‘I don’t know, I can’t judge that.’

‘You know you’re different.’
‘Yes, well I’m gay. And that’s strange in a conservative city like Luxembourg and I guess they simply judge me on the job I’m doing. I never hide myself. I didn’t hide my sexuality; I don’t hide when I want to have fun.’

‘But you are. Everybody knows you.’
‘Well no,’ the mayor says, ‘Because if they really knew me, they wouldn’t vote for me. I’m there for the people. A lot of politicians forget that, once they’re elected. The cemetery is full of people who thought that without them the world would stop. I do my time, if I am not re-elected, I will do something else. I like people a lot, like talking with them, meeting them, discussing issues with them. The only thing is that sometimes, when I’m with my partner, it’s tough for him. Some people don’t even see him, they just see me, that’s terrible. He refuses to have press at home.’

Somebody knocks on the door, opens it and asks Xavier something in Luxembourgish.

‘Madame Wolffer,’ he says to me pointing to the grey-haired woman standing in the doorway, ‘she was the mayor of Luxembourg for 18 years. She used to be minister and is now deputy-mayor.’

‘I’m very European,’ Xavier says. ‘68% of the Luxembourg population is foreign. So Europe starts here. Here you have all the different languages, all the different ideas. The greatest thing that the EU has brought is peace. I don’t think you can put a price on that.  The only thing is that I think the union has grown a bit too fast in the past few years and the acceptance of new people is more difficult if they come too fast or too many. I would have helped countries where the industry is not so good, helped them to develop first, and modernise their industries and  agriculture, to eliminate these big differences before they were admitted as EU members.’

‘So you would help Bulgaria for example.’
‘I didn’t mention any names, you did’ the politician says. ‘The problem is that nowadays we only want the positive things of Europe,’ he says in an agitated voice, ‘nowadays we’re all egoists. We just want more. And we forget that we needed help in the past. Ça tourne, la caroussel.’

‘What do you think of the criticism aimed at the EU? That it’s slow, money-consuming etcetera.’
‘But that’s nonsense,’ Xavier, the politician says, ‘The EU is us, it’s all 28 countries. We have our representatives there. When we have to deal with unpopular decisions, we blame Brussels. That’s too easy!’

‘I don’t know how things work in Luxembourg, but in the Netherlands we don’t send the best and brightest to Brussels.’
‘I can’t comment on that,’ he says smiling. ‘Have to go now, my mother is waiting.’

Outside, the bride and groom have just arrived, in a Ferrari – this is Luxembourg after all.

p.s. Xavier won the last elections and is now prime-minister of Luxembourg