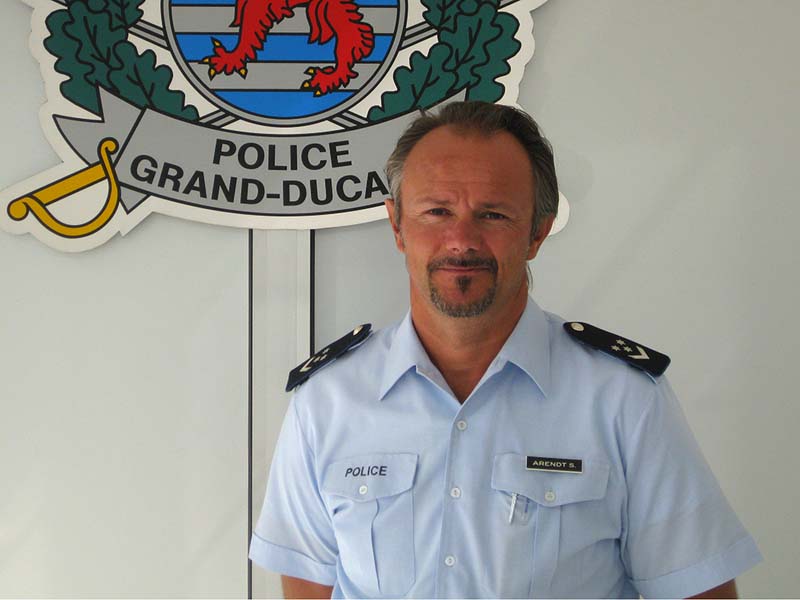 In the waiting room of the police station, which is of course perfectly maintained, this being Luxembourg, stand two mannequins. They are modelling the country’s police outfits: one is wearing a uniform with Adidas-sneakers, the other has a mask on and is brandishing a machine gun – very un-Luxembourgish. But apparently even this fairy tale country has its problems, according to Serge: ‘I worked for 10 years at the train station, in a special brigade. There we had a major problem with illegal immigrants, with prostitutes and drug dealers. Especially after the black immigrants took over the business in ’03. They’re very aggressive and they have nothing to lose. They’re better off in jail than lying in the streets of West Africa. I even know a few criminals who want to get busted when it starts to get cold. They break into busses, commit a minor crime, and get out of jail in spring.’

Serge has wanted to be a policeman since he was 5. ‘Like my dad and uncle I wanted to be a jean-marie: I couldn’t pronounce gendarmerie. I have loved it since I joined, at 19 and I’m looking forward to my last 10 years.’

‘I guess you’ll have to think about a new career then, because what will you do? Play golf all day?’
Serge, tall and slim looks like a golf player. And he is: ‘That is exactly what I want to do, play golf, really. My handicap is 7. And I have many hobbies, so I’ll gladly leave.’

But until retirement he will be the anchorman for Luxembourg Police TV, twice a week. ‘We’ll be presenting things that went on that week, like major car accidents or murders, something special. And of course we’ll talk about prevention. It’s important to communicate with the public, like we do on Facebook and Twitter.’

‘Do the police have many likes?’
‘Yes, because we publish a lot of useful information, such as current traffic information, which is also forwarded via smart phones. And we post successes like the bust of a drug dealer.’

‘Are the police respected?’
‘Well, it has changed. When I’m in uniform sometimes people cross on a red light, even if they see me. That wouldn’t have happened 20 years ago. And if you stop them for a fine they become really angry. It’s the result of bad education.’

Serge sounds a bit disappointed. ‘Is Luxembourg still a nice place to live?’ I ask.

‘Luxembourg is safe, for a start. We only had 6 murders last year and that’s not a lot, even per capita. And the police solved all of them. We do have more break-ins, also because burglars think that every Luxembourger is a millionaire. But the country is deteriorating. The middle class is disappearing. The rich are getting richer, poor are getting poorer.’ And after airing his grievances about bankers and overpaid CEOs, he says: ‘Luxemburg is becoming too expensive. Many Luxembourgers live across the border, they can no longer afford anything here. Which makes the Belgians and Germans angry, because their house prices have gone up, so they can’t afford it anymore. You see, there are many small problems.’

‘What about Europe?’
‘The EU was a good thing – in the beginning. But now the EU has become too big. And the problem is that since the borders were opened, we have lost control. A mix of cultures can be good, but not if the new cultures try to tell us that we should live according to their values. When I go to another country, I adjust. I’ve travelled to Oman and Jordan and when I go to a mosque I take off my shoes. There we don’t go topless on the beach. But here we accept too much. And we almost have to, because there are too many European laws preventing us from doing something about it.  I mean, 20 years ago, when we had a problem with an Italian or a Frenchman, we would put him on the train and hand him over to their customs, send him back, end of story. Now, we can’t anymore because many of the people causing problems have an EU passport.’

‘What is the solution?’
‘We should have proper borders again, but no politician has the balls to say it. Now if you say something against another ethnic group, you’re called a racist. Many people don’t like that, but are afraid to say so. People who are lucky enough to have been offered asylum in Luxembourg, like the 60 Syrians last week, should be happy and proud, they should do everything they can to accept the rules and laws of this country. You know how many Luxembourgish are in prison? Not a lot. Same goes for burkas. I don’t like them. I like to see somebody’s face. And I’m aware that my discomfort is also because of the media: we see a lot of bad things involving Muslims’

‘Are burkas forbidden?’
‘Not yet.’

‘Do you see a lot of them?’
‘No, but that’s not the point: they can be good people, but it’s strange, it’s closed. And another bad thing about the EU is all the money it costs. Greece, for example, faked the figures in order to be admitted and now we are paying for them, we have to help them out. With money we can’t use for ourselves. To restore highways, build schools.’

Luxembourg’s infrastructure appears to me to be in perfect condition, but I’m not an expert.

‘One good thing about the EU is that it has brought peace,’ I venture.
‘Yes,’ Serge says, ‘but that can change quickly. Not between France and Germany, but maybe in the Middle East and its EU neighbours. It’s highly explosive.’