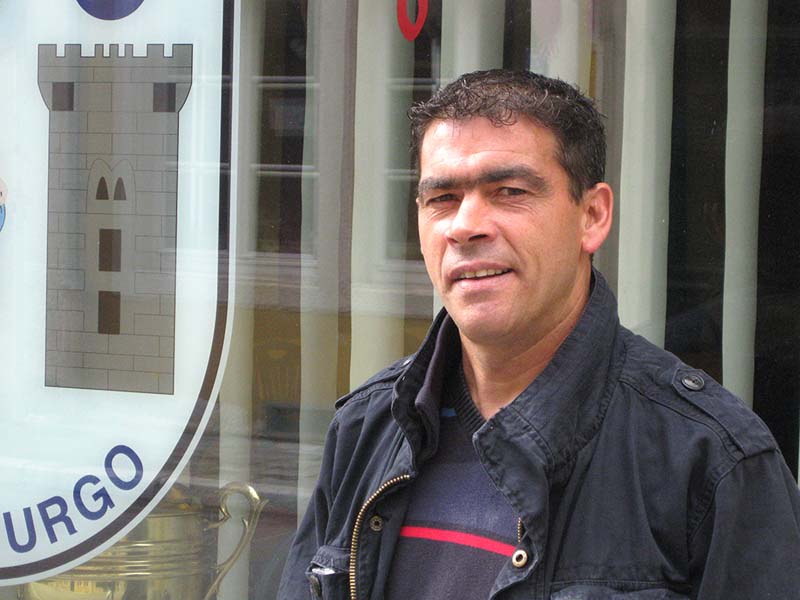 Downtown Luxembourg City really is down: it’s at the bottom of a canyon that separates it from the upper half of the city. One of its three main neighbourhoods is called Grund. Here, in a small medieval street, is the clubhouse of the supporters of Sporting Braga, a Portuguese football team.

‘When they plan their European matches, we follow,’ Jose says.

It is quite a good team: two years ago they played a European cup final at Wembley, against Porto. Jose shows me the pictures. ‘And this one, look, against Paris Saint Germain, and against Bayern Munich.’

A Portuguese fan club in the heart of Luxembourg is not as strange as it seems. Since the 1970s almost 100,000 Portuguese have moved here, where they now constitute the largest immigrant group in the country.

‘Most of us are from the Braga region,’ Jose says. He is drinking a Campari on the rocks. It’s Sunday morning, about eleven o’ clock. His friends are sitting at the bar watching the rerun of the Portugal-Ireland match, a 7-0 victory.

But I guess they’re not interested in smoking and drinking Campari on a Sunday morning.

‘Every two weeks we organise a buffet, and our wives also come.’

‘What is your job?’
‘I’m the chairman of the club,’ he says proudly.

‘But what do you do in normal life?’
‘Ah, you mean that. I’m in construction,’ he says softly.  ‘So during the week I work for the boss and in the weekend I’m here,’ he returns to his preferred subject. ‘We’re a board of 7 persons, together we decide what we’ll do that month.’

Jose is 42. ‘I left Portugal when I was 25. I simply packed my rucksack and went to Luxembourg, all by myself.’ And arrived in Little Lisbon. ‘In the beginning there were some practical problems: we didn’t speak French or Luxembourgish. Now we do. It has changed: in the beginning we mainly worked in construction, doing heavy work, now we Portuguese also have better jobs, at the banks, at the ministries. We even have a political party.’

He lights another Marlboro, pours another Campari and offers me a glass of Port. It would be rude to refuse, even at 11.15, even on an empty stomach.

‘Are you completely accepted in this country?’
‘Almost,’ he says. ‘Sometimes they see us as outsiders, maybe second rate. We have a very good football team, CeBra, that is Portuguese-Luxembourgish. We play in the highest league and in 2005 we even played the cup final. We lost. I don’t want to complain, but it was a disgrace. The referee was, how shall I put it, unfair. They accepted us, but winning the national cup was a bridge too far. It’s rivalry – I understand it.’ He thinks for a moment. Ronaldo celebrates his second goal on the big screen. ‘But we also see, now that there’s more unemployment, the Luxembourgers choose their own people when they hire new people. Nowadays they’re a bit afraid that we will take their jobs.’

‘What do you think of Europe?’
‘It was good, but now we start to doubt. Not every country is equal now. For example Portugal and Ireland both wanted money, and Portugal had to pay a higher rent. That’s not fair? That question runs through my head. And the Romanians, they don’t integrate the way we do,’ he says indignantly. ‘They’re causing trouble. Luxembourg is a country that takes care of people and they only take advantage of it.’

Ronaldo scores his third goal. What happens when Portugal plays against Luxembourg?
‘It happened some years ago. We went to see it, of course. Luxembourg lost, but scored one goal, produced by a Portuguese-Luxembourgish striker. So all the goals were Portuguese, and we had a fantastic evening.’