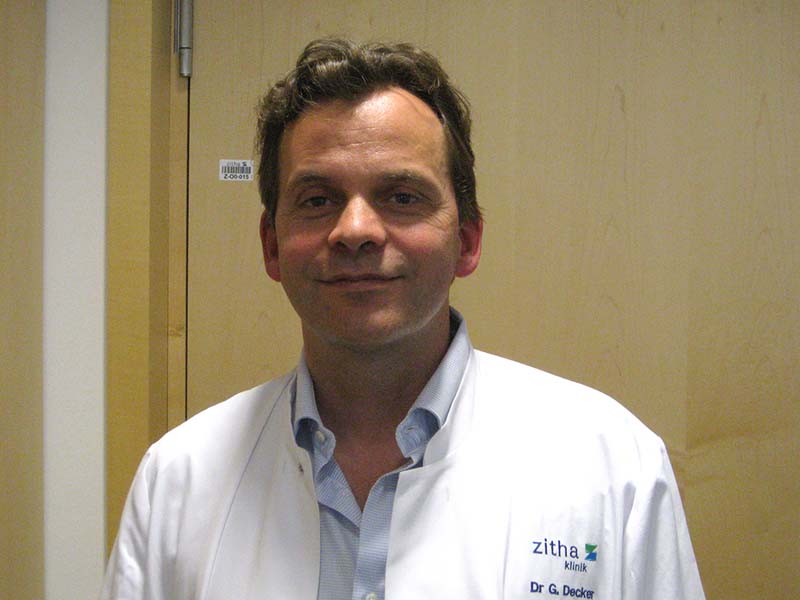 In a quiet wing of the old Zitha Hospital, George, a resident doctor, is sitting in a waiting room. Patiently, does that mean ‘like a patient’? I’m late, like a doctor, because I couldn’t find my way in this maze of a place. I also had to track down some paracetamol  to relieve a splitting head ache.  Not exactly mission impossible in a hospital, but it took another five minutes.

George looks like a doctor: blue shirt, white coat, in his early forties and in good shape. As he gets up to shake hands he drops the old gossip magazine he has been reading. It’s a French magazine, but it could have been any one of the other five languages he speaks.

‘Goededag, hoe gaat het met u?’ he says, Dutch being one of those, to my surprise. He studied in Leuven, the Flemish-speaking part of Belgium, he explained later. ‘Every Luxembourg doctor has to study in another country, as we don’t have a medical university. I studied in Belgium and in France, and I had two years of work experience in a French hospital.’

‘So you’re able to compare the different systems,’ I say once we are seated in a big clean, fresh-smelling conference room. ‘What are the most striking differences?’

‘Medically, there are not a lot, but administratively Germany is awful. In fact it’s the reason that a lot of German doctors leave to work someplace else, in Sweden or the UK for example, where the administrative hassle is not as bad. All the paperwork… It’s become enormous. For every operation, for every patient, pfff. They have chosen to become doctors, not secretaries. And the shortage of doctors is beginning to show. But,’ he laughs, ‘it will come to Luxemburg, of that we can be sure: everything that happens in Germany, France or Belgium eventually comes to our country, only five years later.’

An assistant, not a nurse, comes in to bring a tray with mini-croissants, pains-au-chocolat, fruit juices and Evian. I am starting to like this hospital, especially now that the paracetamol is kicking in.

‘Why did you become a doctor?
‘I was always interested, but I’m a lazy person; I assumed med school would be too complicated. I liked sports a lot, that was my real passion, and so I wanted to do something sports-related, maybe a sports teacher or a physiotherapist.’

George was on the national athletics team  – high jump and long jump – and he played volleyball and skied, but his main sport was basketball (‘But you’re small!’ I say. George is can’t be more than 1.70 metres).

‘I was a point guard,’ he protests. That figures: they’re the team’s midgets. Even though Luxembourg is a tiny country, I should be impressed by this, and I am.

‘But when I was 19, I suffered a serious knee injury and during my stay in hospital the idea of changing direction grew and so I decided to become a doctor.’

‘What type of doctor are you?’
‘I’m a thorax surgeon, a breast surgeon.’

‘Are you good?’ I realise there’s no world championship in doctoring, but I ask anyway.

He smiles modestly: ‘Well, I’m the best in my country: I’m the only one. But I’m often invited to conferences all over the world, and I’ve been published, so no, I don’t think I’m a bad doctor. You know, you only need one thorax doctor per one million people, and there are half a million of us, so theoretically I could do this part-time.’

The assistant notices that we’re out of pains au chocolat and immediately returns with a fresh plate of pastries.

‘Is this a private hospital?’ I ask.
‘No, there is one private clinic in Luxembourg, but this is a public hospital, though we are independent; the doctors are hired by the hospital. There is one hospital, in Esch, where the doctors are civil servants. But here, no. We don’t have to rent an operating room, nor do we have shares in the hospital, we don’t run it. It’s got an upside: at Zitha you’ll have patients until you’ll you reach your pension, provided you’re doing a proper job. And that’s unlike a private hospital, where if you’re bad, patients will stop coming. The downside is that even if you’re really good, the best in your field, you won’t make any more money than your colleagues. The thing is, in most cases patients don’t care who’s the doctor. Take a radiologist for example: the patients come for a certain type of scan, not for the doctor who pushes the control panel. On the other hand, for some specialisations, like aesthetic surgery, people shop on the internet, and in two hours they can be in Frankfurt, Brussels, Strasbourg or Paris. There’s competition, but not so much for emergency doctors or basic stuff.’

‘Isn’t it a pity that you’re so small that you’re never really world class?’
‘Well, we have the Schleck brothers,’ he says, taking up the challenge.

‘In the past we’ve won the Tour, we have a top-50 tennis player, and we’ve three football professionals, one judoka who came 6th in the world, and a swimmer who was in the final at the last world championships. In terms of our population, it’s not bad and the same is true of politicians: we had Jacques Santer and Claude Juncker leading the European Union.’

‘But perhaps that was because of your size: a Luxembourger is neutral and harmless.’

‘How is Luxembourg governed?’
‘In general not too badly… the last few months there were some troubles, a few scandals. Financially it’s more difficult now, so there’s more pressure on government.’

‘What do you think about Europe?’
‘About the union you mean? It’s a good thing. We need more of it, we need to become the United States of Europe, as it is the only way to be competitive. There’s no other choice. You know, we Luxembourgers feel more European, cause we were one of the six founding fathers. We only see the advantages. And I see beauty in the diversity. Europe is not like Australia where there’s the same landscape and same people for thousands of kilometres: here you’ll find a new culture and language every hour.’