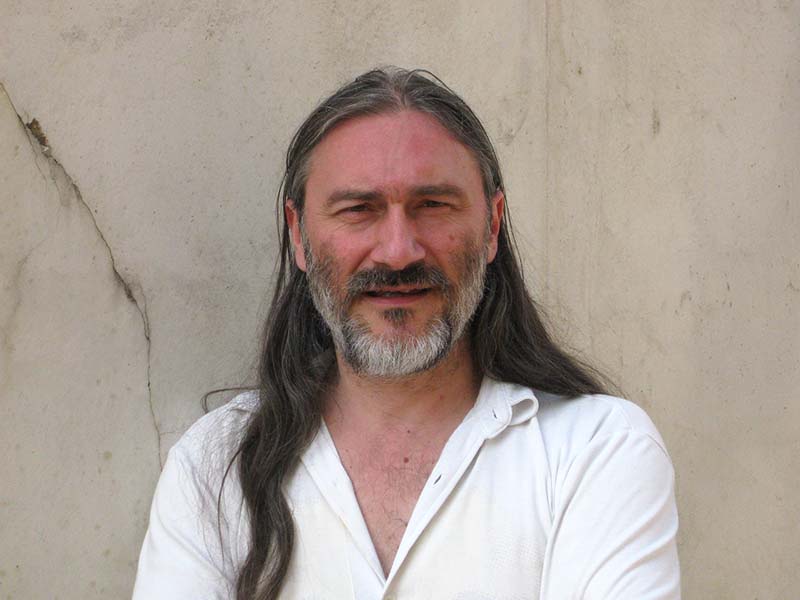 Bruno gets up from the kitchen table, so tall he almost touches the ceiling. This is where he and his wife work and live – it is a studio in both senses – in a medieval house in a narrow street in Grund, downtown Luxembourg. Très bohémien. He carefully unscrews the lid of the tin coffee pot, while talking about art: ‘Art follows money, so Luxembourg is not a bad place for artists. The only thing is that the money is relatively new, earned over the past 50 years, with the rise of the country’s financial sector. And because of the European institutes of course. Before that art was a painting that had to go with the sofa, or an oil painting you won at the fair.’

‘And that’s not your style?’
Bruno is a photographer, a contemporary artist, and so is his wife.

‘I can do it, but hey, art is an expression of freedom. But of course sometimes I have to compromise.’

He slowly scoops coffee – one, two, three, four spoonfuls – into the top of a coffee pot. ‘But it’s a good place for artists: you can survive here. If you’re recognised as a professional artist, not a teacher who does art on the side, there is a form of social security. And Luxembourg has developed better taste. The bourgeoisie has been abroad, has seen art, and is educated, so they buy better art. They go to New York three times a year, to Paris, so they’ve been around and they like to talk about what they’ve seen and bought, and how famous the artist or the gallery is. And especially when Luxembourg was European Cultural Capital, they invested in culture at the casino.’

‘A casino?’
‘It’s the name of the museum, not where you play roulette.’

‘Oh.’
He slowly screws the lid back onto the pot, starts to place it on the stove, but realises he first needs to light it. His wife is working on her Macbook at the other table, their 4 month-old baby is sleeping in its cot.

‘I was a chef in an organic restaurant before I turned artist, 20 years ago. It was by accident, to be honest: I had been an assistant to a famous fashion photographer in Paris. One of my customers in the restaurant knew that and when a panicked local designer needed a photographer he recommended me. I didn’t even have a camera at that moment.’

He searches for a box of matches in the drawers, finally finds one. The first two matches break, a draft blows out the third and fourth, and the fifth finally lights a fire. On the wall next to the stove hangs a drawing of Bruno and his wife; he looks a bit like Jesus (or maybe like John Lennon).

‘Does the crisis affect you, as an artist?’
‘I don’t know. I’m slow art, like slow food. I don’t have a gallery that sells for me, I sell directly. They come by at night, sometimes. And we manage, also because we live modestly.

I’m quite well known in this town, and I’m also on a committee that judges public art, which helps. Maybe the institutions have less to spend than before, but private people still have money.’

The fire on the stove is burning, but Bruno is still holding the pot, all the while talking and wandering around the studio. The radio is tuned to a French station.

‘It is France Culture radio, I listen to it a lot.’ He goes off on a rant about a French minister, who was very bad in his opinion. ‘The trouble is memory. People have bad memories; we shouldn’t fall into the trap, like in the famous movie… come on what is?’

He finally puts the pot on the stove.

‘What is the status of an artist?’
‘Somewhere between the prime minister and a criminal. Though I guess my parents would have preferred me to be an engineer.’

‘Do they own any of your work?’
‘Noo!’ he exclaims. ‘But I work with them.’ He grabs his laptop and shows me a picture of his dad at his house, a small grey-haired man, looking very uncomfortable. ‘They are part of my artistic investigations.’

I believe the coffee has been ready for some time now, but Bruno sits at his kitchen table, talking. About Europe: ‘Europe has brought us peace, that is the main thing, and it is good for art. For everything, but also for art. When there’s a period of calm, society can build on things, instead of having to repair everything that was destroyed in the war. But it doesn’t work anymore, Europe. Too many countries. I don’t understand why it happened. I assume it’s some kind of deal: Germany wanted Romania in, France wanted Greece, so they both got what they wanted. The interests of some countries go against the interests of others. We compromise by making your interests my interests, and in the end nobody’s happy.

‘You seem well informed. How come?’
‘I read, I hear. But I remember the Maastricht Treaty and I can see now that what was promised then hasn’t materialised, voila. In times of war it is easier for governments to lie, but now it is quiet and there’s time to investigate. Would you like some coffee?’