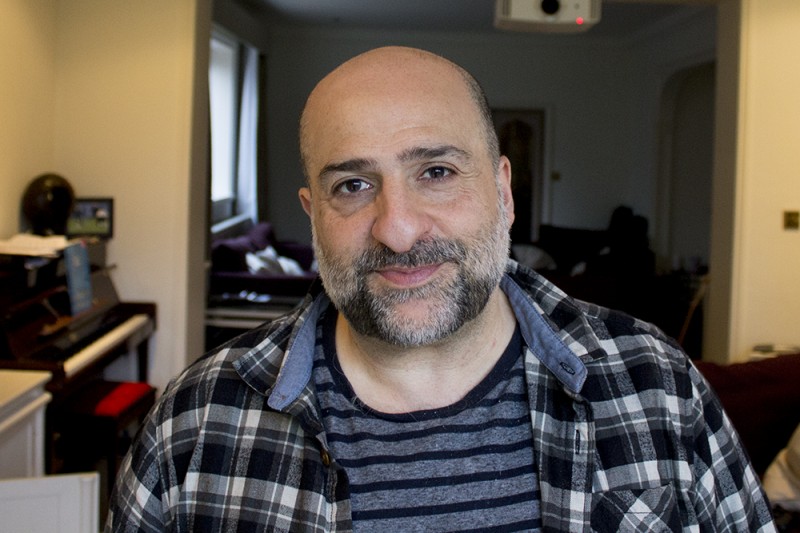 The weather on this Saturday morning is dreadful, even more so than you would expect in London. The tall trees in the Richmond area look a bit dreary, their branches creaking under the pressure of the stormy wind. The stately townhouses look grey and gloomy. Unlike the weather, Omid greets me with a warm smile on his face. He leads me to the sitting area, a room filled with music instruments.

The TV, which is on mute, shows images of last week’s attack on Charlie Hebdo, the satirical weekly in Paris. The battle of religions and cultures is becoming more and more conspicuous in a union that was founded to preserve peace. A battle that is foreign to the Baha’i faith that Omid adheres to.

‘The truth is that there’s an unknowable essence with God; we’ll never really understand what it is. We’re lucky to have a connection to this unknowable, through what Baha’i call “Manifestations of God”, like Buddha or Allah. In different places people pretty much have the same teachings. We Baha’i believe in a person called Baha’u’llah, which means “the glory of God”. He’s that one prophet every belief expects to come and take humanity into the final phase of its evolution. We’ve gone from childhood, now we’re in the turbulent adolescence. There’s financial conflict, there’s conflict between religions and cultures. The teachings of Baha’u’llah will take us into the maturity of mankind, where the globe is one; where you have equality between men and women, where you have a lessening of extremes in poverty and wealth.’

It’s a really helpful thought, not rejecting any God. Modern, too!

‘It is! I mean, look at football. I’m a Chelsea fan; I only care for Chelsea because that’s my club. The only way you can really get into football is when you support one club. But it wouldn’t make any sense for me to go around telling everyone to start supporting Chelsea. The whole system would break down; there’d be no football if we’d all support Chelsea. And that’s what Baha’i is saying: have your own God, but take away this exclusivity of it being the only true God. Who knows what the true God is, maybe from outer space!’

Omid is one of Britain’s best known stand-up comedians, performing all around the world with his shows. He also appeared in many films, playing people from all kinds of backgrounds. ‘The movie Infidel is about a Muslim who finds out he’s actually Jewish. The movie actually says: let’s not tribalize religion, fighting over it is stupid.’ As a comedian, Omid constantly tries to find a balance between humour and respect.

‘Early on in my career, I did a sketch about a soap opera called Middle EastEnders – based on the original EastEnders, but with Muslims. You know that bell that rings in the last round? We did the Muslim version: “Allahu Akbar, last orders please!”’ Omid sings, startling me with his loud voice.

‘I got a lot of abuse for that, people writing death threats on my website because I showed disrespect. Then, a Middle Eastern professor sent me a message. He said “I appreciate your joke, but I understand the outrage. You’ve taken something that’s sacred to Muslims, and put it in a comedic setting. This is seen as disrespectful.” I took this with me, because I’m religious myself I should respect other people’s sacred things. Looking at what happened at Charlie Hebdo, I think the cartoon of Mohammed with a bomb on his head is very confusing, and not particularly funny. For people to lose their lives over this image is terrible. Everyone should chill out a bit.’

In Holland, comedians like to mock religions, they feel it’s their right to do so as a part of freedom of speech. Some of them would never stop this, not even after these attacks.

‘The way I see it, there has always been a lot of talk about what can or can’t be said. In the 70’s we had very racist jokes about black people looking like monkeys. You’ve got to be very careful with that, because racist jokes always come from a standpoint that that race is inferior. Ideology, on the other hand, is OK to joke about. Any idea should be let criticized.’

‘Yes, but when it comes to religion, there are certain things that people regard as sacred. And part of our society’s problems is that we have lost respect for sacred things. To react to that in such a violent way is absolutely wrong, but you can’t make fun of everyone’s belief like it’s nothing.’

How is the situation in London? Does Britain have the same tensions as France?

‘Yes, unfortunately. We have a political party called UKIP, which is very much against immigrants. They’re gaining a lot of popularity. Suddenly there’s this perception that the country is full, that there are too many immigrants. Last year, 2 million Brits were living in the EU, yet certain factions are upset that the same number of European immigrants lives here. That’s their right, we’re all Europeans. If I have to move somewhere for work, I would like to feel like there are no restrictions.’

Omid sits back, takes a sip of his tea.

‘My parents came here from Iran in 1958. Their plan was to only stay for a few years. They had children, and as they were about to go back, the Islamic revolution happened. We couldn’t go back then, because the Baha’i were a prosecuted minority. So we stayed, but all of a sudden I went from being a normal schoolboy, to a refugee.

That must have been strange.

It was, all of a sudden things changed. I felt like an outsider, I felt different. But I also felt like Britain was my safe haven, which made my British identity even stronger. I speak like any English person, the way I feel and think is very influenced by Britain. But I keep my Iranian heritage, which is a little crazier. I like to dance on stage, do stupid things.’ Omid laughs out loud, a boyish look on his face. ‘That’s really bizarre to the English audience. So blending the two cultures plus my Baha’i ideology creates something very unique. And that’s something we tend to forget; when immigrants come here, they enrich a culture.’

There’s a referendum coming on whether or not Britain should be part of the EU. The overall sentiment in Britain is quite anti-Europe, especially in the countryside where UKIP has a lot of supporters. What do you expect to happen?

Deep thinking wrinkles appear on Omid’s face, a soft moan escapes from his mouth. ‘It’s hard. Personally, I’m pro-Europe. I love travelling to Europe and I hate changing money, I wish we had the Euro here. A lot of Brits would do well to see how Europe is advanced.’

You’re talking about travelling to Europe, but you are in Europe! How come Brits keep saying ‘there’s Europe, and there’s us’?

Omid smiles. ‘Yeah, we have an island mentality, unfortunately. People fear having to give up their identity. I would hate to lose all that’s good about Britain; the humour, the music.’

But you’re the prime example of someone that has more than one identity. You’re British, Iranian and maybe even a little bit European.

‘I know! We’re all multi-facetted; we’re not just one thing. You’re not totally defined by your country. I’m a British European Baha’i with an Iranian heritage, and I’m proud of that.’