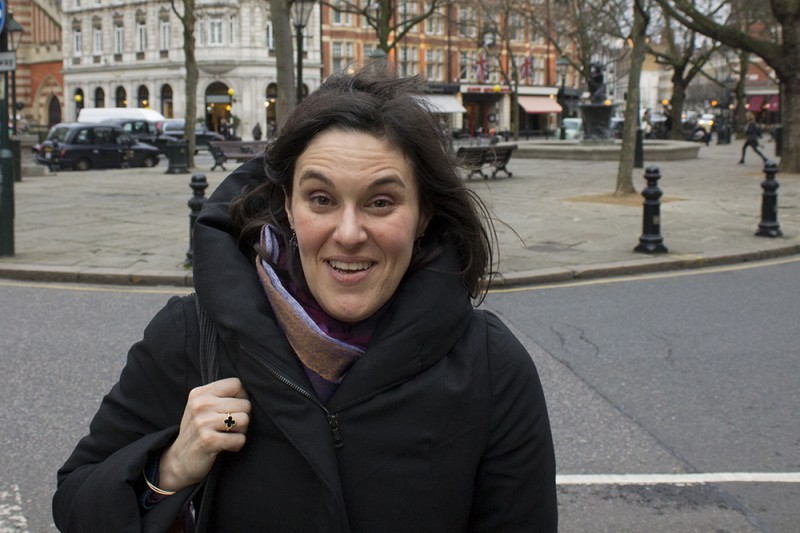 ‘In art, we always need eccentrics and individuals to splinter away from the group. We’ve always had that, and I think I’ll just keep being that individual. I think that art is to try and share a different vision. And that’s not always comfortable.’

Nicky quickly glances at her watch before taking off her coat. ‘I have to leave at three, to get my daughter from school,’ she says with a smile. She’s a single mother slash artist, working in a studio in Islington, in central London.

‘I was really lucky to find this place, as property prices have gone through the roof these days. We run a non-profit gallery and an educational centre, which is about the only way we get funding. Also, the Art Council that’s funding us says it wants more ethnic diversity. So we have German artists, Swedes, Americans, even one Iranian. They’re from all over Europe, and beyond. It’s nice to work together, you need stimulation.’

In the old days, it was the other way around. Artists were very individualistic.

‘The nature of artists changed. It’s now about contacts and intention. Art is no longer solely representational, teaching you bible stories and narratives. Nowadays you have art which is almost like physical theatre, or conceptual art where different forms blur.’

In that way your paintings are old-fashioned.

Nicky laughs. ‘I’m like a dinosaur, I just draw from life, with oil paint. My work is actually quite psychological and provocative. My work is about a private world, about private feelings. It’s not the public domain.’

Nicky’s paintings do indeed show a very personal and for some, confrontational, image of people. She paints children and adults, quite realistically but always with a different twist. Her collection ‘Project Man’ has only been exhibited by the feminist wing of the Brooklyn Museum, because of its controversial paintings. ‘It was rejected many times, all by male curators. It touched them, they were actually angry about it.’

We’re in a crowded café, on the top floor of Peter Jones. Just for the view. The smell of afternoon tea fills my nostrils, but I decide to have a coffee. Nicky has a tea, holding her cup with her hands up her sleeves, trying to escape the January cold.

‘I went on maternity leave during the start of the recession. When I came back, all my galleries had gone bust. At first I thought we just needed a clean-up; that everything had gotten too decorative. Now I know we have been playing it too safe, I wasn’t commercial enough.’

What can you do about that? Change your style, perhaps?

‘A friend advised me to make my work more about chattels and politics. A smart move, but I can’t, even though I know I’d be very successful if I did. I still hope I can make it through doing my own, private dark work without having to compromise.’

I used to have my own company. I work as hard now as I did then, but it was much easier running a business than it is now as a writer.

‘It’s true, and the scary thing is: it’s all about commercialism. Museums will only buy from certain commercial galleries, galleries that are only driven by what sells. London is very driven by money these days.’

Nicky interrupts me. ‘…Are buying the decorative work that titillates in an obvious shocking way. They like work that shocks in a sexy, slightly perverted way.’ Nicky rolls her eyes. ‘That’s an easy way to shock. All very accessible, very illustrative. The work that is a bit uncomfortable, and challenging in different way; that’s difficult for them. And those works are not bought by corporations.’

‘Exactly. And the other thing is that art schools don’t teach skills anymore. These days, artwork seems to be anti-skills. They call it ‘raw’, raw being a sort of euphemism for a lack of skills.’ ‘Raw is cool, raw is good.’ ‘Right. And I think it would be quite nice to see a refined aesthetic comeback. Art that is skilful without being too literal or illustrative, art like Sigmar Polke. That would be nice.’

Nicky shrugs her shoulders, as if trying to shake off the weight of commercial expectations. She smiles, her dark hair dances on her shoulders as she talks. But her eyes give away a deeper, more worried side of her.

Have you ever considered moving to another place, where it’s less money dominated?

‘I would love to live in Berlin. It’s such a vibrant city, and much easier to live in. Unfortunately, I’m stuck here with my daughter as her father still lives here. Also, as long as I have my studio in London, it’s fine.’

Nicky was born in South Africa, to Portuguese parents. ‘I stopped saying that I’m Portuguese though because everyone would compare me to Paula Rego, whose work I don’t really like. It’s too illustrative, too Portuguese. If you want to compare me to someone, compare me to Helene Dumas. I’d rather be in the shadow of someone I really admire.’

After having spent her youth in the UK, she went abroad to study art, first in France and later at Yale, with a full scholarship. ‘I loved Yale,’ Nicky reminisces with a smile. ‘I think that was the most formative period for me.’

So what are you? British? South African? European, maybe?

‘I can’t really say I’m European, I have too much American and South African in me. I guess I’m a moon girl, that’s the best way to describe it. Although I have to say that London these days is becoming like that, as well. So many nationalities. When I went to school, I was the odd one out. Now everything’s changed.’

Is there something typically European?

‘I think the social safety. I used to dream of working in New York, but I’m terrified of the prospect of not having health care provision. Whereas in Europe, you always have this almost Utopian safety net. I think that’s very European, we have some breathing space.’

Is there such a thing as European art?

‘I guess it’s all merging. People can travel freely to study in other countries and see other cultures. You used to be able to tell from a work which country the artist came from, because it always had a national feel. But with the internet, everything’s becoming pasteurized. Unfortunately.’

You have seen the American dream; you’ve been to New York. Is there a European dream? And from an artists’ perspective, what kind of a dream should it be?’

Civil liberties and above all, freedom of expression. I’m really frightened that our civil liberties are slowly being eroded. Like the terrorist attack on Charlie Hebdo, yesterday,’ Nicky says, nodding at the newspaper on the table next to us. ‘I have already heard the head of the MI15 saying that they need more power to track danger.’

Of course, that’s the usual reaction.

‘It is. But these things bring hysteria and it confines the basic freedoms of people. Artists are particularly confined in their freedom, because our work is easily misunderstood. A while ago I was walking in the park, making photographs of shadows. The police then accused me of taking pictures of small children that were in the background. I’ve had newspapers reviewing my work, saying “Hoberman makes shocking and paedophilic paintings”. I was afraid that even taking pictures of my daughter would be used against me.’ Nicky looks at me, her eyes filled with a combination of astonishment and dismay. She sighs, thinks for a moment.

‘Artists, above all, must be able to see things quirkily and differently. That would be my European dream, to have this freedom again.’