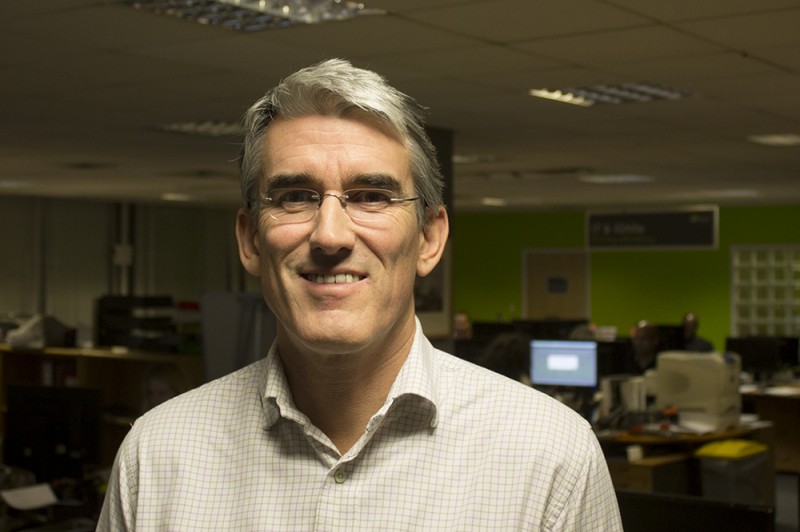 Guy is his own man. He’s an entrepreneur who runs his own company out of his office in London and there’s nowhere he’d rather be.

‘It’s the world in one place, ’cause you got absolutely everything going on and that’s why I love London. My wife wants to move out of London. She’d like to live in the country. And I just think: ‘God, no. I love being in London.’ I love this culture, the energy. There’s such high energy, so much going on. In 5 minutes I can be in Hyde Park or Kensington Gardens. I can run for an hour and just see trees.’

His admiration for the city is not unlimited though. Guy had planned to be somewhere else by now. Not that he has any regrets.

When did you start?

Really? That’s a long time ago.

‘A really long time. Yeah. I planned to be on a beach by now. It’s taken a bit longer.’

Will you be on a beach shortly?

Here’s a man who loves his job, although it’s not always been easy.

‘Sometimes it’s been awful. Business has been right on the edge of going tits up, as we would say.’

This is where Guy’s more relaxed side comes into play. Even in the office there is time for fun. Especially on a Friday.

Are you good at that?

But when it comes to political issues, Guy doesn’t play around: He speaks his mind. For example, he’s very opinionated about the possible ‘Brexit’.

You think it’s not going to be a ‘Brexit’

‘No, absolutely not. It would be utter madness. For exactly the same reasons it would have been utter madness for Scotland to come out of the UK … there’s a point also economically. We’re so tight to Europe. It is such an important part of… 50% of our exports are to Europe. Why would we…the City is 1 of the power houses of our economy. It exists to a great deal because of our relationship with Europe. There are so many head offices in London, because we’re part of Europe.’

Guy seems rather in favour of the opposite.

‘There would be negative consequences for Britain, economically and culturally … The European project is about making sure that what happened in 1939 can never ever happen again. And I think it’s absolutely right. I think that if we are all integrated, economically and politically and socially, the chances of that ever happening again diminish.’

‘Well, it is now, but if we come out, it will reverse the trend.’

This does not mean Europe doesn’t pose any problems for the UK.

‘I agree that the benefits is the issue and if you can deal with that, say you have to earn benefits. And that’s a perfectly civilised principle, which is if you want to come to Britain to work, fantastic, but you won’t get benefits until you have worked for whatever period it is. It would be perfectly reasonable to take a period of 12 months to 2 years. If you’re unable to work, you should get to your own country.’

Others are not as convinced that the UK won’t leave the EU. Guy tells an anecdote, and as usual he doesn’t hold back his opinion.

‘There’s a Czech lady in our office and she came to see me yesterday and she said: ‘Guy, could I have a minute, please?’ And I said: ‘Of course! What’s the problem?’ And she said: ‘Would you be a sponsor for my passport application?’ And I said: ‘Of course I’ll be a sponsor, but why do you need one? You have a European passport, yes?’ And she said: ‘Yeah, I do, but I’m really worried that Britain is gonna come out of the EU and they’ll throw me out.’ I thought: ‘How awful is that. That they’re people like that now, that are scared.’

‘Of the consequences of some crackpot-nutcase like Nigel Farage or Marine le Pen in France. These crazy right-wingers. That’s the effect that it’s having on people. It’s making them really scared. That’s terrible. That really brought it to life for me. I said: ‘Don’t you worry, we ain’t getting out of Europe.’ She said: ‘I’m gonna get the passport anyway. I said: ‘ ‘Fine! I’ll be your reference.’ Sad though, eh?’

Guy seems like an employer who tries to make his people feel at home and tries to help out wherever he can. Ever the English gentleman, Guy remains modest.

So, according to Guy, being part of the EU has its advantages, but Europe has its own problems. And, once again, he’s quite outspoken.

‘The issues that I can see at the moment in Europe: there’s a huge differential between the Northern Europeans, who are quite capitalist countries, quite hard-working countries, quite economically responsible countries; and the Southern European countries, where it’s far more socialist. There’s far less rigid compliance with tax laws and benefit laws. There’s a lot of people taking the piss. You got a 2-speed economy in Europe.

Guy doesn’t have a solution, but countries should be able to leave if they want to.

‘I don’t know how you can reconcile that. As long as you allow those other Europeans to exist in the way that they are. Merkel has done exactly the right thing with the Greeks: To say: ‘No. Those are the terms of the bail-out. And if you want to be a part of Europe, that’s the basis on which…If you don’t like it, tough, go.’ But if they want to go, they should go.’

If it was up to Guy some policies would be decided on a federal level, while others would be developed at a more local level.

‘There is absolutely a place for a federal government that oversees certain things that can be done at a federal level very effectively. And they are things like defence and foreign policy and economic liberalisation and possibly taxation levels, but maybe not.’

And other things you should leave to the locals.

What can Europe learn from the UK model?

‘That we are better together.’