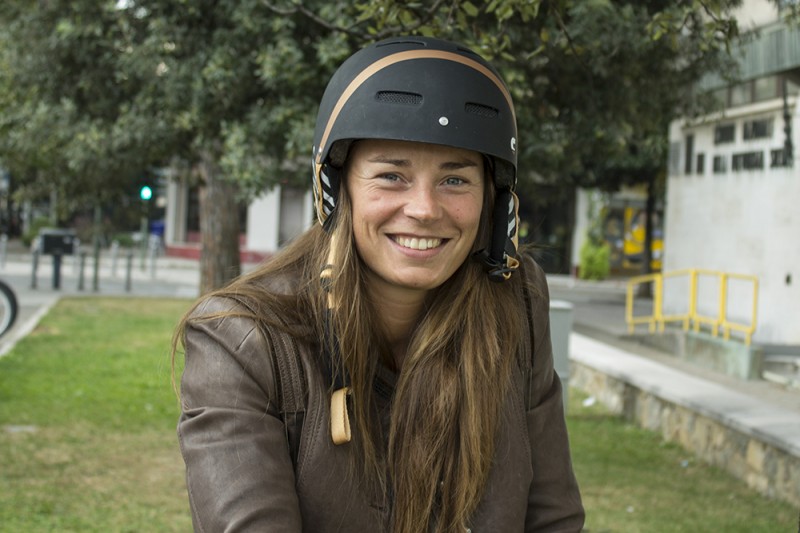 I was supposed to meet her at twelve in front of the church, in the little Italian village where she has her training camp. I had been waiting for about ten minutes, wondering if she was one of the women strolling past me, when I saw an old moped approaching, slowly but surely. The moped stopped, its driver took off her helmet, and there she was, the fastest woman on the planet, on an old Piaggio. But that’s what she is. Tina Maze is a two-time gold medal winner at the Sochi Olympics in the downhill and Super-G events, who rockets down a mountain at over 150 km/h.

‘My coach and friend and everything, Andrea, gave it to me, for my 30th birthday,’ she says. ‘It’s nice to drive it, though the streets are bumpy here…’ Funny to hear her complain about this.

We sit down for a cappuccino at the café opposite the church.

‘I like it here, because it’s local. Shops are small, it’s more personal. A coffee here, a newspaper there. Only people who follow the skiing know me.’ Much different than in her home country Slovenia, not far away: she is a star there, probably the best known face in the country.

The sportswoman of the year since 2010, her face is used in many commercials – back in Ljubljana I had seen it laughing at me from many walls, encouraging me to consume Milka chocolate, for example. There people might stare and call out to her. And that’s the reason she specifically asked me not to mention the name of the small village where she is now staying.

It is September and the season is about to start, in early November. She looks impressively fit, with upper legs that are maybe twice as big as mine and at least ten times stronger. ‘I’m tired,’ she says, ‘this morning’s training session was very, very hard. After this interview I will go straight to bed for a couple of hours.’ Training, sleeping, eating, and then when the season starts her life will revolve around travelling, racing, eating, and sleeping. She loves the travelling: ‘It’s why I love this sport so much: I have been able to see the world, and coming from a small village in the north of Slovenia, surrounded by mountains, I finally saw horizons… I was looking for a way out. Always interested in seeing what was happening behind the mountains around my village and sports was the answer. Did you know that 7 Olympians are from my village, a place with no more than 2,000 inhabitants?’

Has it changed you, the travelling?

‘Yes, it opens your mind. You see other people, culture, nature. I’ve seen most of the countries I wanted to see, except for Japan: unfortunately there were no races there the last couple of seasons.’

You have never been to the Netherlands, I guess: no mountains there!

‘No! But my sister is studying there, in Breda.’

She does the low countries, you do the high countries.

‘Yes,’ she laughs. ‘We have the same mentality when it comes to travelling.’

I imagine this ski group is like a travelling circus, the way it is in tennis, everybody travelling together, from Kitzbühel to Aspen, from Schladming to Vail. Is it also fun, do you have a band? I’ve heard the tennis pros have one.

‘Yes, we have that too. Kostelic is a good guitar player for example.’

And you sing and play the piano, right? In 2013 she scored a hit single with a house-style song called ‘My Way Is My Decision’. It was good, although people probably would have bought anything she recorded. ‘No, I don’t, when I’m not training I try to read, to write, always sport-related. But to be honest, I’m a bit tired of this life… I’m looking forward to a life after sports. I’ll study again, pedagogy. And I’d like to become a mother. You know, I have a lot of friends and hobbies, but I don’t have time to see them, not even my family. It’s hard. I’ve been away from home since I was fifteen.’

We discuss her country. ‘Isn’t it marvellous? Within three hours you can get from the mountains to the sea, we have beautiful rivers, historical caves.’

Slovenia joined the EU in 2004. Did it change things?

‘I’m not the right person to judge, because I don’t see everything. I did notice a lot of changes after Yugoslavia split up in 1991. Now each family has three cars, before we had zero or maybe one. There are shopping centres, with people buying things that aren’t really necessary. The need to consume, it makes them happy, apparently.’

Does it make you happy?

‘Yes, also because of my team. Andrea is Italian, and so is the guy preparing my skis, and my physiotherapist, while my manager is Swiss. We all bring different elements to the team, and it has changed me a lot. I learnt to speak Italian, for a start, because these Italians don’t speak Slovenian, even though they live very close to the border. And they opened me up: before I was very shy and closed.’

In golf there’s the Ryder Cup, USA against Europe. Could we have that in skiing too?

‘It is already like that. We all know that Americans are very good in sports, it’s another world, a different approach. For me personally it was a big challenge to have this battle with Lindsey Vonn and now with Mikaela Shiffrin, to understand how to become better than they are. It was huge for a lot of people who were following me, to see how I built my confidence during the run-up to the races. They certainly have something more… Europeans are more realistic, Americans have all this built-in confidence, it’s amazing, it’s in their lifestyle, in their thinking. And that’s good: you need that to be able to push your limits, that’s the way to achieve goals.’

And off she goes, on her Piaggio. Weeks later I saw her picture again in the sports pages. She had just won the first World Cup of the season, and was given a reindeer as a trophy.