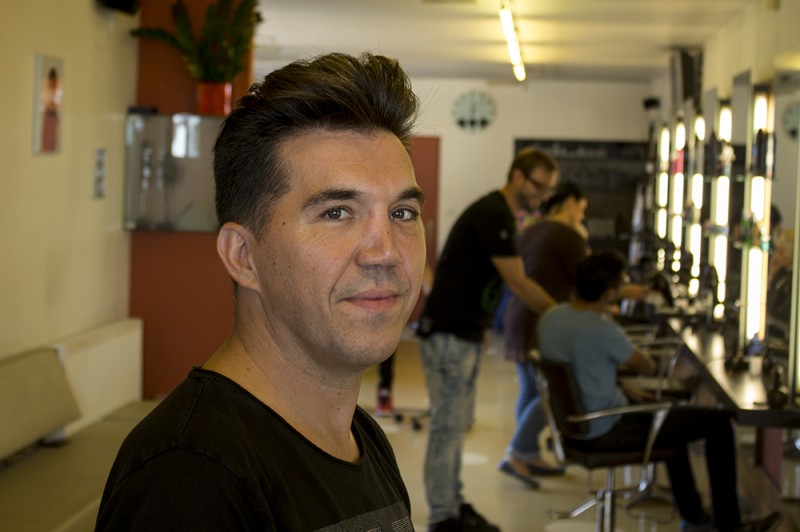 Yugoslavia may have split up, but here’s a man who embodies this union: born in Serbia, near the Bosnian border, now living in Slovenia. ‘When I go to present my work in Croatia, Monte Negro, Macedonia, wherever, I feel at home. First of all because of the language: they’re quite similar. We can speak to each other, and we know each other, our mentality is similar.’

‘Yes! It is like Great Britain. They have England, Northern Ireland, Scotland and Wales, and they live together. They do business together.’ He thinks for a while: ‘although there is a difference: mentality-wise Slovenians have more discipline, they work harder than Serbians.’

Stevo certainly seems disciplined. He gets up at 5 to start making plans for his shows and his business. He is a hairdresser in the morning and a dad to his two kids in the afternoon. Also: he doesn’t drink and is a strict vegetarian. And he is successful: ‘next weekend I have a show in the Royal Albert Hall; this is fourth time they invited me. I’m one of 20 hairdressers worldwide – they say I’m one of the best.’ He is not boastful, just very self-confident, when he says he is to receive an award for everything’s he has done for Slovenia. No wonder people recognise him as we walk across the Tuesday market in Ljubljana, on our way to get a sandwich. ‘We are doing an interview,’ he says several times, shaking hands left and right with friends or clients – he is the local celebrity as well.

His business has been hit by the economic crisis: he has only one shop left of the three he used to own.

Do you see a light at the end of the tunnel?

‘I think next year will be better. The future will be better, I believe. Also because the rest of Europe is recovering. But in general I think Ljubljana and Slovenia are less ambitious. We are not hungry. We have more or less everything. What more do we need? I don’t need a private jet. Maybe I will open another salon; ambition is good. But it won’t be like ten years ago, when all people wanted was more and more. ’

Slovenia has been compared to Cyprus, in that it was too easy to borrow money.

‘But now the problem is how to how to get back money to the bank,’ he laughs. ‘You don’t feel the crisis that much. You see a normal number of the cars on the street. But we can’t borrow at the moment, there is no extra money from the bank. Still, I think we are quite a stable country, still the most successful Eastern European country. Nobody is hungry here.’

Neither are we, after finishing a large, greasy sandwich at a Serbian sandwich stall in the market.

First we discuss football, then politics: ‘I can’t believe what is happening now in Ukraine. The United States’ international politics are too aggressive. They are destroying the world. They came and split the country, made them hate each other. It is stupid. The same thing they did in the Middle East. They killed Kaddafi, killed Saddam Hussein, they didn’t understand that only Saddam Hussein was able to hold all these factions in the country together. With an iron fist. Now look what happens. They are destroying a country with a history of 5,000 years, while they have only existed for 300 years. They’re crazy. They think they can change the world with bombs. Also, the war in Yugoslavia was due to outside pressure, because we didn’t have that many problems with each other.’ And about the EU: ‘we are better off now, but it’s different: in Yugoslavia the other countries respected Slovenia.’

Because you were best in class.

‘Yes. Now we are nothing in Europe.

Change of subject: What is it like to be an entrepreneur here in Slovenia?

‘It’s okay, but government isn’t helping that much. No tax breaks, nothing – it’s quite hard. They have some programmes where they help you when you employ young people or the handicapped, but in general, no. They should stimulate young people to set up their own business.

‘Many things! It’s not easy, because it’s a big territory with many different countries, cultures. But in general, I’m against war, against the army. I would get rid of the army. We don’t need them. We need police, yes, but not army. We are all the same, one country. I don’t need borders. Looking down from the moon, you see one planet. And I would handle immigration differently. The EU makes a mistake by not helping the Italians. Some politicians come, have take their picture taken with an immigrant and leave. They should do more to prevent people from wanting to leave their countries.’