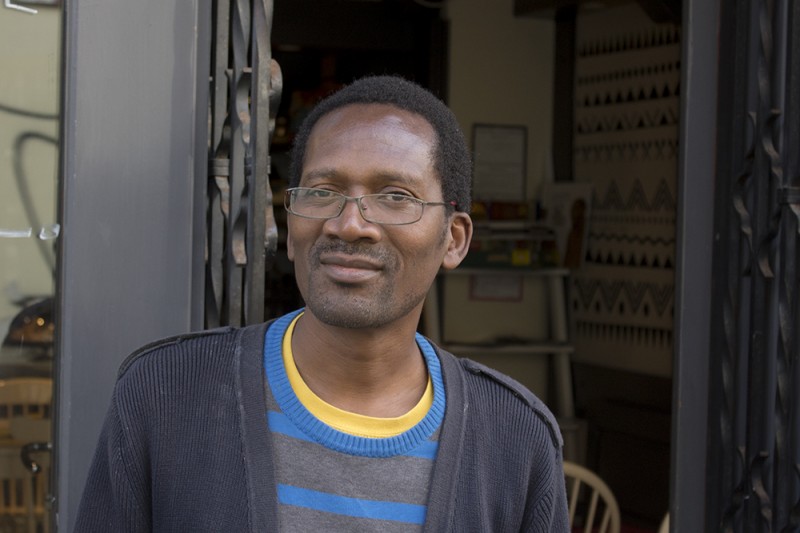 ‘I came with the view that Europe was the centre of the world, that is what I had learnt from the British, at school and in textbooks. The land of milk and honey, in Europe you can get everything. So when I came over from Zimbabwe – I was 19 then I didn’t take any of my CDs or records with me: I thought I would just go to a shop in Ljubljana and buy the music that I like.’

‘Bob Marley and all that stuff. But boy, the only Bob Marley CD they had at that time was somebody’s compilation, and it was not even Bob Marley himself, but a tribute to Bob Marley.’

‘The second thing that shocked me was the level of ignorance. People in Zimbabwe knew a lot about world affairs. An average guy in the street could easily tell you who the president of the US or Egypt was. But at that time quite a few Slovenian students could not tell you who the PM of Yugoslavia was. People were extremely helpful, especially the young people. Many spoke English, so it was easy to make friends. And they were interested in Africa, but they often asked questions like ‘do you people have houses?’. The clichés. When I told them that I was from a city that was much bigger than their capital, a place with banks, a parliament, democracy, some quickly lost interest: they wanted to talk about animals.’

Max came to what was then Yugoslavia to study computer science, in 1982. After his studies he joined a software development company as a technical writer, a job he left in 2009. During that entire time he was active in the NGO sector, as president of the African Students Union of Slovenia and then the African Centre of Slovenia, and in 2010 he founded the Global Institute of Slovenia, which deals primarily with global learning. It was through this institute that he started a social venture called Skuhna: a restaurant run by immigrants. And that’s where we met, downstairs, in the kitchen.

Can you tell me what it means to be African?

‘Being African to me means that Africa is born in me. Well, about this African organization, it was really because of numbers: there were not many Africans in Slovenia at all. ’

A club of Zimbabwean students would be really small?

‘Exactly. There would be only 3 or 4 of us. There is a Nigerian association, because most of the Africans in Slovenia are Nigerian. The second factor is that to many Slovenians every black person is African.

While you could be an American…

‘It doesn’t really matter: to them you are black and that is it. But yes, there are certain things that I attribute to Africanness. One is this whole idea of collaboration. Of solidarity, of respect. I am not an anthropologist, but my own feeling is that when I go home, and with home I mean Zimbabwe, there is much more togetherness. Families live more as a union.’

‘More communal. And this is not just bla-bla, this really is true. Your success as an individual is because the community is successful. It’s not that individualism is bad, but individuals are encouraged to succeed so that the community succeeds. Many families, or communities, will send their best to Europe hoping that they will make money and share it with families back home – of course I’m speaking of a segment of the Africa population. This is an important facet of Africanness, togetherness, ubuntu in southern Africa.

And what are other differences with Europe?

‘I don’t like generalising. I can only tell you by contrasting what I see in Zimbabwe with what I experience here. There is a big difference in how children relate to their parents. There children listen to the adults, to older people in general. Upbringing is something not only for the parents, but also for the aunties and uncles and the neighbours.

When you arrived in 1982 Slovenia was still a part of Yugoslavia, so you witnessed the change to independence. What was that like? And then later, in 2004, what changed, if anything, when the country joined the EU?

‘About independence: what I really felt was that a lot of people grew more confident about themselves. They had a stronger sense of belonging. On the negative side, there was a rise in nationalism: more racist or homophobic incidents with skinheads.’

The chef has arrived. He greets his boss and starts preparing lunch.

Max continues: ‘When Slovenia joined the EU there was a lot of euphoria, and it coincided with the economy getting much better. My feeling is that a lot of people’s expectations weren’t met. The EU represents to them a big home, security, but a lot of people long for the things we left behind in former Yugoslavia. It was also home, in terms of culture.’

And in that home they were the best in class.

‘Yes, and they don’t mean that much in the EU… Many have mixed feelings, I think. But they kept some good things from the socialist system. What I like for example is maternity leave for almost a year, free education, affordable health care. Not enough to my taste… there is still a lot of corruption, especially in the healthcare system – the procurement procedures are benefitting a few. … But in general Slovenia benefits from being a member of NATO and EU. These institutions are strong and therefore have a strong voice in international affairs. They can muscle out the African union or individual African countries. And they have a strong voice in international financial organizations like the World Bank or the IMF.

In many countries the politicians who are sent to Brussels aren’t very good. Is it the same here?

‘Actually the present EU-commissioner is considered to be good, and bright. But there is some debate about the new candidate, an ex-Prime Minister: some say she isn’t good enough, some say she is. No, so far, they are sending good candidates.’

About immigration. Should we make Europe a fortress or should we allow people to enter. What should we do?

‘We should change the policy resulting in mass migration. You know, if you look at the reasons for immigration, in most of the cases it is because of conflicts. Most of them unnecessary, and the EU could play a role in making sure these wars don’t take place in the first time. And we could look at the economic situations in some of these countries. A lot of multinational corporations are active there, because of all the natural resources, but a lot of the money flows directly to Europe and the US, into illicit funds. Evading taxation, simply because they have better lawyers than these countries can afford. But then there are the subsidy policies : the EU heavily subsidizes its farmers, who then basically dump their products onto the African markets. At the same time, when African countries go to the IMF for a loan, they are given as a condition that they have to liberalize their agricultural markets, and they are not allowed to subsidize their farmers… It eventually results in poverty in these places and people wanting to go somewhere else. So yes, Europe should open it’s borders for humanitarian as well as socio-economic reasons – aging Europe needs fresh blood.’

You are a social entrepreneur. How prevalent is that concept in Slovenia?

‘There are 40 registered enterprises now. There is a new law, granting social entrepreneurs better tax tariffs. There is support, but it is relatively new. Or not so new: in former Yugoslavia there were cooperatives, still operating. Owned by many, for the benefit for many.’

‘In my case, we are employing immigrants. Not necessarily professionals: we provided training for them to increase their skills and productivity. And we don’t work with the cheapest products, but with local products. So the margins are smaller. And not all people appreciate that the prices are higher… quality is good, and prices are okay. Lunch for 5 euros.’

‘Yes, that’s right. The cook is Indian. If you’re able to stay for dinner, you’ll get some.’