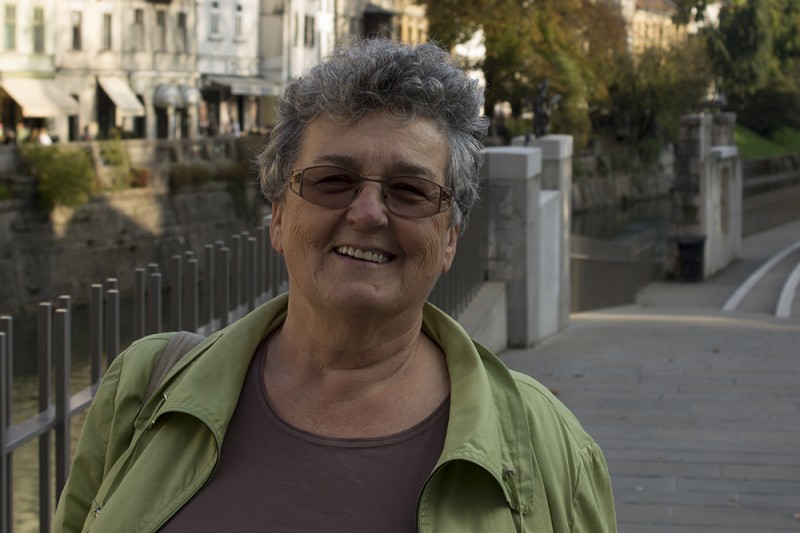 ‘My father was a doctor. I was the youngest child and I learned to read by myself, so they said “she is smart, she should be a doctor.” So that’s what I did.’ She became a gynecologist, and then in 1980 the head of the public health institute. Mateja is 72 now, but still very active. ‘I’m the president of the federation of pensioners. ‘We have 220,000 members,’ she says. She starts talking about the issues, mentioning percentage after percentage. ‘The average pension was 78% of your salary. Now it is 56%… 60% of pensioners have less than 600 euro per month; they can’t survive on this. Fortunately many of the older people own their homes, 90% of them. The only thing is they don’t have money to maintain their houses or flats. They are dependent on their children, which makes them really unhappy.’

She’s not your everyday doctor, this lady. Small, unconcerned with outward appearance, she has friendly eyes but they sometimes flash with indignation. ‘I was in parliament, for one term, in the 1990s. I was with the former communist party, even though the communists killed my father; but nevertheless I joined them – now I’m the biggest leftist in the country. I’m called the Khmer Rouge.’ She feels she has to explain herself: ‘We needed them, the communists, because no one else could engage in politics, so soon after independence. That is why I supported them. I remind them all the time that they should not leave people poor. That they should take care of them. I always say that medical doctors are by profession leftist: they have to take care of everyone.’ She pauses for a moment. ‘A lot of people hated me for it, the Catholic Church for example. The Catholic Church hated me – I was quiet well known, you see.’

It is a pity they hated you, but I have the feeling that you don’t mind a little fight.

She studied in the US, at the prestigious John Hopkins University. ‘I was only the second Slovene to go there. I already had three children, and I left everything at home and went to study for seven months. Just studied. I must admit, I felt bad about leaving my children with my mother and my husband. Well, they survived… And I had a great time, even though I was on the edge of poverty. But boy, the academic level was so high!’

So you could you travel?

‘Yes, borders weren’t that closed in Yugoslavia. Around 1960, when we experienced a recession, they were opened, and many people left to work in Germany, brought money back and survived. It was quiet clever.

She has much praise for the old days. ‘For fifty years our standard of living went up, until 2000. But then more and more people became unemployed. Some hundred thousand. That was quite unusual for generations; we didn’t have unemployment.

In the communist days, jobs were created, for the sake of jobs

‘The philosophy was that it was always better to keep people in a job. I remember I had a couple of employees who didn’t function properly, due to alcoholism. I had to keep them, because otherwise they would be lost, they would be out of society.’

But something went wrong in Slovenia. ‘Right after independence American experts came to tell the Slovenian government how to privatize things. The merchants from the west. They said it would create a lot of jobs, but it didn’t work. They simply took the money and left. It is awful. You know, in one year the new political leaders took as much as the communist did in 50 years. The idea of communism is good and I hope it will return.’

She takes a sip from her tea and continues: ‘Slovenia was a rich country; our health system was free, well, paid through taxes. It was good, you know, we had one of the lowest infant mortality rates in Europe. Now one third of the families are struggling… young people leave the country because they can’t find a job, the brain drain. The suicide rate has increased. Death rates have increased, also of people between 40 and 60, because people are working too hard and barely have rights. That’s another good reason to join the EU, to return the rights of the workers.’

Joining the EU, did it mean giving up independence again?

‘No, we are truly independent, but we have to think differently in our heads – we were never independent before. I hope our children will learn to be independent.’

You have worked all your life. In many countries, that is not normal for women. ‘You know, nowadays in Slovenia 90% of women with children work, the highest rate in Europe.’

How come, is childcare that well organized?

‘Very much so. 70% of preschool children go there.’ Again, the percentages. ‘We developed it under socialism, because under socialism we had to study. Tito always said study, study, study. And that is what many girls did. We have more university-educated women than men. Because they are more industrious.’

Or because girls don’t get drunk every night?

But what do you think the differences are between doctors in Europe?

‘I don’t know if there is that much difference. But something happened in many post-socialistic countries: doctors discovered how easily they could get money out of patients. Such a pity…’

What good has the European Union brought to Slovenia or to you?

‘The best thing is that we don’t have borders. That we have the same currency. Excellent when you are travelling around. But we don’t feel the European Union very much: it is too far from us. Our politicians are fooling us: they blame the European Union when they want to implement something unpopular. So we started to check, but we don’t have many translated documents. And somehow our parliamentarians in the European Parliament don’t report what is going on. Three days ago I talked to a man who was elected to the EP. I said, tell us what you’re doing, write it in the newspaper, every month, half a page.’

A former prime minister has been thrown into prison for abuse of power, but is still in the parliament. The Slovenian candidate for the European Commission was rejected by the EP. ‘We have shown the EU that we are not ready yet to be part of their family. That is very sad…’

She has to leave. ‘I have a dog at home, in the mountains, and when it gets dark, the bears might eat him.’