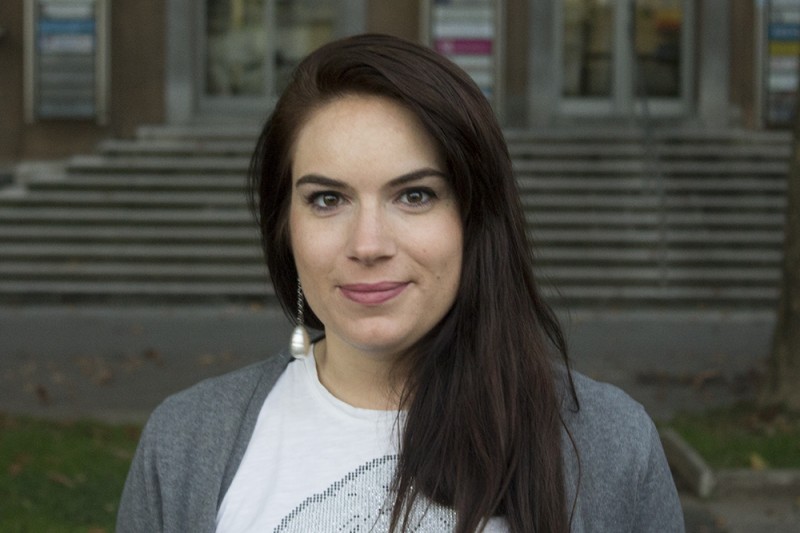 Her studio is in the far corner of a former tobacco factory, now used for start up-companies, small businesses and for artists, like Masa. ‘It’s quite a walk and hard to find, I know,’ she says laughing, ‘but the good side is that it stops people from just showing up, something I don’t like.’ The studio is how you imagine a studio: the finished paintings stand on the floor with their faces to the wall; works in progress are mounted on two large easels. There is a little desk in the corner, with a computer and a water cooker. ‘I’m about to finish these painting, also the big ones in the back, because on Tuesday I have an exhibition. That one, the black and white. The more minimalistic. And there is work that was exhibited in Amsterdam, last month.’ The ceilings are high, the windows are big.

Great, all this light!

‘No, I don’t like it for painting, the sunlight isn’t constant, it changes and distorts the images I work on. And the windows are huge, it is impossible to get window shields for them. That’s why I always work at night, with the studio lights on. I start at 6 or 7 and work till 4 in the morning. Another advantage is that I never have to queue with the others, the roads are empty and quiet, and I can drive home in 10 minutes.’

She is quite successful as an artist. Her work has been exhibited in galleries throughout Europe, and she has been nominated for all kinds of awards. This past week she has been working with a group of international of artists made up of Germans and Slovenians on a project she was selected to participate in.

Why did they choose you?

‘Probably because of my work and also because I really wanted to do this. I had asked them a couple of times how I could be invited. So they finally did. It’s also the way you work; some people can only work in their own environment. You have to be flexible and some people are not.

‘Many aren’t. Maybe some of them who were invited said no. Artists can be moody. And it is pretty intense: a whole week.’

How is the cultural life here in Slovenia?

‘I think it is very rich. We have live music concerts every week, and a few openings per week. The problem is the quality. I wouldn’t mind living somewhere else, though.’

You have that option now. You could work and live anywhere in the EU. Can you still remember how it was before 2004?

‘Yes I do. It wasn’t really different, because our situation during the war was not as severe as in Bosnia and Serbia: we were always well connected with Italy and Austria. But living elsewhere… the thing is if you want to sell your work, you have to be active, to be there. When I was in Prague, a lot of things happened. I met people, saw them in person. It is different from just shipping the work. That is why I think it would be good to be based somewhere abroad.

Can you make a living from your art right now?

‘I can’t. Maybe some others can, but not me. Not now at least, but I’m working hard to make it happen. I will give it another 5 years and if I’m still not able to, I need to find another job. My parents are supporting me, I’m very happy they can and do. But I think it’s coming, the momentum is coming.’

I know some artists are bad at selling their work – or themselves. Are you good at it?

‘I think this is very important. And also in the beginning you don’t have a name. Some artists are very successful, just because of their name, their reputation. They don’t do PR, have no website and they still sell much more.’ Masa’s website is good, check it out at www.masagala.eu.

It’s odd, isn’t it, that people who work, for example, for a bank, do not work as hard, and are not as talented and dedicated as you are, yet they are paid very well while artists earn lousy pay. Maybe the world doesn’t value art as it should.

’True, but at the same time I think that there are too many artists, or people calling themselves artists…

Does the government support artists?

‘They definitely try to, especially young artists. I have a lot of projects; I’m very, very busy, but nobody pays for the project’s expenses, so I often need the help of friends and family. I made a nice work for the Month of Design, I hope you come and see it, by the way. I got the wood I needed for free and my father helped me collect the materials in a truck.’

Do you feel Slovenian?

‘Certainly. No doubt, I don’t feel the confusion I see with some of my immigrant friends. But there are some typical stereotypes of Slovenians, some of which I don’t like. I’m not typical in terms of my profession, or in terms of sports. One thing typically Slovenian is that we are quite open. And that we speak many languages. In general I think that is very important.’

Do you feel European as well? Does that mean anything to you?

‘Yes it does, definitely. Also professionally: I’m a coordinator for the European Cultural Parliament, for youth networks.’

I looked it up: it is a forum for European personalities in the fields of arts, culture and letters, designed to encourage dialogue, discussion and debate about crucial, topical issues surrounding European co-operation, European democracy and European culture.

‘We meet in Ljubljana, but also somewhere in Europe, once a year. It’s nice, but the funding is always problematic. Again, you have to pay for everything yourself; I expected the travel expenses would be taken care of, but no.

Did you vote last May?

‘I always do. I can’t stand it when some of my friends complain about political issues, but never vote.

Do you follow the European news? Are you interested in what is decided in Brussels or is it too far away?

‘No it is not. My mum actually works for a European association of hospital pharmacists, so she is really involved in these things. She spends a lot of time in Brussels. I like the city too, and yes, I’ve seen what they do. I’ve been many times to the parliament.

If you had the chance, what would you change about the EU in Brussels and in Europe?

‘I would try to improve the image of artists and people working in the cultural sector. Because I’ve heard too many times that artists are seen as parasites, people looking for a handout. And I think the art sector could be more regulated, in the sense there should be better criteria for determining who is a good artist and who to support, to help them really, by offering basic funding. Not just everybody with just low funding. The problem is so complex, which I think is probably why they don’t do it. I’m sure, if there is a cultural department within the EU, they are thinking about this question. I don’t say they are lazy, I think they are finding solutions, but it is really hard to manage the implementation. I don’t really see an actual effect in the real life. If you put out an open announcement, as they often do, thousands of artists apply. How do you even process that?’

It is not really transparent, is it?

‘Yes, totally. Look at sports. You know I am a karate referee, and there the rules are very clear. It would be really nice to know in art, what to do when an open announcement asks for something, because it isn’t written precisely enough. Sometimes I spend three days on an application… I have colleagues who are way better at writing this stuff, but I don’t enjoy it so much, because I’d rather do my part of the profession – paint in my studio.’