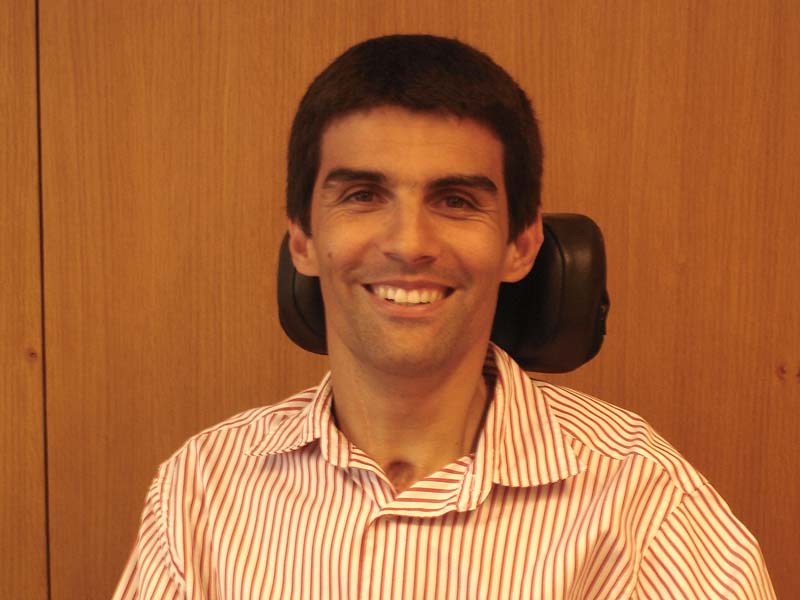 My guess is that he is close to 1m90 tall, in his early 30s, wearing jeans, a red and white striped shirt and New Balance sneakers. An ordinary, good looking Portuguese guy, except that he never stands tall and his shoes always look new, because he never walks in them: Salvador is in a wheel chair. He is also a national celebrity with his own  TV show: Salvador.

‘Handicapped people are like normal people; they have jobs, friends and the same dreams as everyone. They want to swim with dolphins, to scuba dive, you name it. In my show we make these dreams come true. In one episode we even went paragliding,’ he says.

‘Do you participate in all the action?’
‘Yes, I like to do what I can.’

A motorcycle accident in 1998, when he was 18, left Salvador almost completely paralysed.  All of a sudden he was confronted with issues he’d never had to deal with, and he was surprised to see how ill-adapted his country was to the needs of people in wheelchairs. Schools, restaurants, and houses were all virtually inaccessible.

‘Most handicapped people were trapped inside their houses or their institutions. They were left out of society. Thirty years ago most of the handicapped didn’t have a proper education, because of their immobility. I was shocked to see this and I wanted to do something about it. So I started to organise small events. I clearly remember the first one, a Christmas show by a Portuguese singer, Mafalda Vega. We still do that, we still organise events.’

We is Associação Salvador, which he founded in 2003. It has four employees, countless volunteers and many sponsors. The organisation does everything it can to improve the quality of life of handicapped people in Portugal. In addition to the events, it supports scientific research, and provides financial support to those who need it, and strives to make the country more accessible for wheelchair users.

‘Let me show you something,’ he says, ‘come.’ We’re sitting in the big conference room in his office in a modern building in the centre of Lisbon. He runs his Associação from this office, as well as his business: he represents the truck company Iveco in Africa. I walk to his chair and he shows me his iPhone. ‘We’ve developed an app.’ On the screen I see a map of Portugal. ‘If you click on one of those venues, it will tell you if it’s accessible, the width of the entrance, if it has a WC for the handicapped, etcetera. Nice, isn’t it?’ With some effort he slowly moves his long thin fingers over the screen to operate his app. ‘This is my favourite place, it’s ours, not far from here. It’s a sports centre, with a pool, basketball court, and hand bikes. And there are two physiotherapists on duty all day.’

His secretary sticks her head around the door to say that Salvador’s new appointment has arrived.

‘You’re busy.’
He thinks for a moment, tilting his chair slightly backwards. ‘Yes, I am. But my life is in balance now. In the early days I spent so much time on my Associação that I hardly slept. I can’t do that anymore, so I divide my time between the foundation, my company, my family, my wife and my friends. And therapy: I train two hours every morning.’

‘You’re a famous man in Portugal. How does that feel?’ He really is: the policeman I had just interviewed wanted to escort me all the way to Salvador’s office so he could meet him in person.

‘On the street people recognise me,’ he says. ‘People often come up to me and want to talk, especially if they have disabled people in their families. They congratulate me, and sometimes ask me for autographs, which is a bit foolish since I can’t write. It is flattering, I admit, but it can be troublesome if the stories about their problems and how the government doesn’t help take too long. You know, I don’t see myself as a celebrity. I’m Salavador. But fame has brought me a lot. It’s given me the opportunity to help other people and that’s my big purpose in life.’

He looks at his watch. ‘My secretary will kill me.’

‘Last question. What other country would you like to live in?’
‘Maybe in Holland! It’s very accessible compared to Portugal, and I have heard a lot of good things about the mentality of the people, their attitude towards the handicapped. That’s not the case in Spain, Italy or Portugal. But on the other hand: I love the warmth and the passion of us Latins, the sun that gives me strength.’

And he’s off. Salvador, saviour in Portuguese.