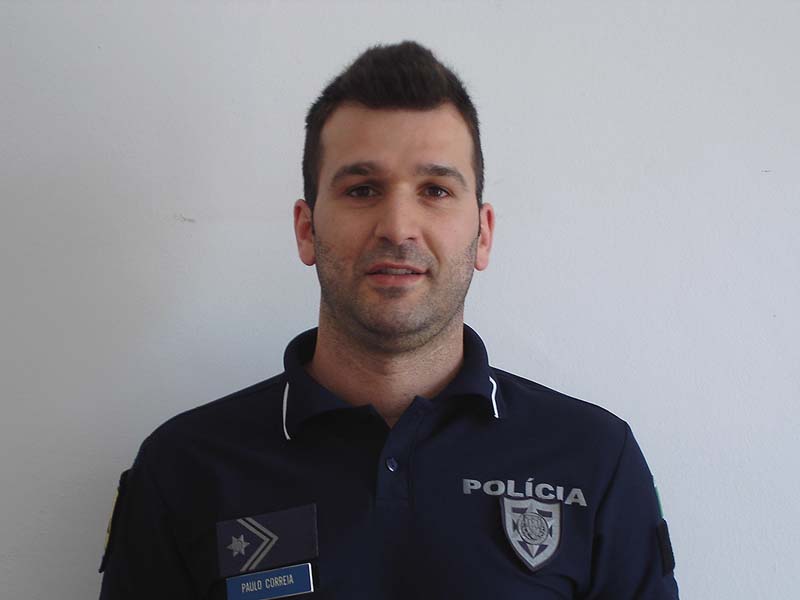 The fans don’t work in the police station at Largo do Rato. In the waiting room an old television on top of a display case filled with sports trophies plays a soap series interspersed with a lot of commercials. In the room next to mine a black man is sitting with his ankles tied, one door further I can hear an elderly woman telling a police officer how she’s been robbed – or so I understand: my Portuguese isn’t that good. I’m waiting for Paolo to drive me to another building. ‘It’s quieter there,’ he had said.

A few minutes later I’m sitting in a police car, in the back, Paolo and his partner are in the front. I’ve just learned how difficult it is for policemen to get into a car: they have to unhook their bludgeon and  holster.

‘What police duties do you have?’ I ask. He’s working for the Polícia de Segurança Pública, the ‘city police’. In Portugal there’s also the Guarda Nacional, operating in the rural areas.

‘At the moment we are working on the Safe School Project. We go to schools and tell them about social issues, warn them about the risks of drugs, etcetera.’

His English is remarkably good. ‘I like languages. Unlike the Spanish, they only speak Spanish. They’re less open minded.’ It wouldn’t be the only criticism directed at his neighbours.

We arrive at the place where Paolo wants us to do the interview, the district’s head office: an old building, with creaky stairs and wooden floors, slightly derelict. A place where you might expect to find a ballet school, or an old fashioned law firm, but not the Lisbon police.

We find a room, next to the one where his commandante is sitting, to whom Paolo introduces me, perhaps to show his boss he’s been chosen to speak with a foreign journalist.

Being a policeman was not his big dream. ‘I played football professionally, in the third league. I loved it; I made a proper living, until I got injured at 24. So I had to choose a new direction and that was joining the police.’

‘Why?’
‘Because it’s stable, it has good career perspectives and a lot of opportunities. Now I’m doing safety school, next year maybe a special unit or a dog training group.’

‘How ambitious are you? Do you want to become commandante?’
‘Yes,’ he says without hesitation and almost loud enough for the present commandante to overhear in the room next door. ‘But I want to add something: It’s not just career, I’ve learnt to love my job. It’s very gratifying. Sometimes you’re a psychologist, sometimes a doctor, when we deliver first aid. We’re trained to help.’

‘How does the public view the police?’
‘By law we’ve been given the authority to do what we do and that is protecting the people. People should respect us for that.’

‘Could it be possible that there’s more than respect, fear perhaps?’ I had heard that the Portuguese are afraid of the police, that’s why they address them with deference: si, senore officer.

‘You think so? I know there’s a difference with other countries. I was on exchange with Spanish colleagues last year. On patrol, on the road, I saw people using their mobile phones while driving. It’s illegal there as it is here. In Portugal they would have immediately dropped their phones as soon as a police car appeared, but not in Spain. But fear? Maybe amongst the old folks, the ones who remember the days of dictatorship, before ’74. It has changed. I dare say that we are loved. You know, not anyone can join the police, mind you, it takes a certain level and that’s why we communicate much better now. We put a lot of effort into reaching out, by visiting schools for example. We’re here to serve, not to suppress. We’re here to make sure democracy is safe.’

He says it without irony.

‘Could you live in another country?’
‘Spain maybe, that’s close by.’

‘But extremely anarchistic.’
Paolo laughs. ‘I love my own country most. It’s truly blessed: the coastline, the food, the perfect weather, the people. The only disadvantage is the economy, the crisis. But people have stayed calm. And the good thing is that sunshine makes a bad day look a lot better.’

‘And what about Europe?’
‘I don’t like the way it is treating us now. We’re stuck in a hole, basically, we can hardly pay the interest. I have the feeling that they don’t want us to help, but to make Portugal dependant.’

After the interview he and his partner drive me back to the old station. A car in front of us may or may not have jumped the lights, but Paolo has no doubt and he exerts his authority by turning on the sirens for a couple of seconds. His mate writes down the license plate. ‘He’ll receive a warning, not a fine,’ Paolo says to me. Si senore policeman.