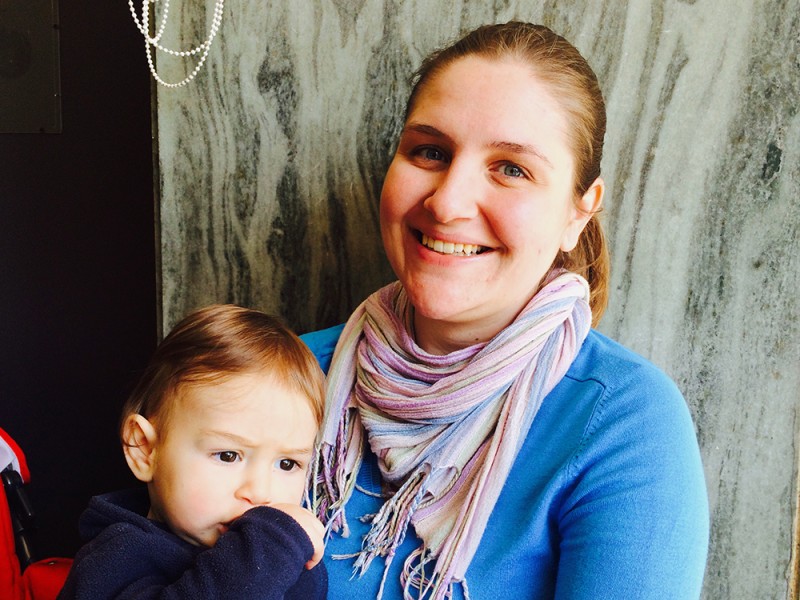 I had met her in the Clube de Jornalistas, where I was having dinner and she was waiting tables. I ran into her a couple of days later in the park (and Lisbon is not really a small town). There, in the park, she was busy with her second job: painting miniature cold porcelain figures. Gift shops paid her 50 cents per figure, so even as we talked, she was painting like crazy, but very precisely at the same time.

That was a year and a half ago. Lisbon was the first city on my Youropeans tour, but at the time I had only 7 categories, the 8th, ‘the immigrant’, was added in Berlin. And that is why I had to return to Lisbon, to finalize my project. It was no punishment. Having seen all of the EU capitals, Lisbon was still my favourite.

And Camila was a nice person to talk to. She emigrated from Brazil in 2008. ‘I was 22 then, and I went to Portugal as a volunteer to help addicts, in a community. I still see many of them, they’re like family.’

We are sitting in Estrela, in a classic café-patisserie, serving very good pastéis de nata. ‘I no longer paint figures, I don’t have time for that, now that I’m a mother.’ Pedro, her baby, is watching us from his stroller, quietly, for the most part. ‘But I do make these,’ and she shows me a colourful iPad case. ‘I was in Brazil for a couple of months 2 years ago, and you know, these products aren’t appreciated at all. Literally, I would sell one for less than a Real, here it would be about 20 Euros, which is about 40 times more…’

‘It is the nature of Brazilians, they don’t appreciate handwork. It is not a very nice society, I think: people care only about themselves. And it’s extremely competitive: if you don’t have 5 stars at school, you’re no good. They almost fight to get the best seat on the bus: they want the best. It’s all about me-me-me. Also, during my last period in Brazil, I was robbed three times – by colleagues. I wanted to report it to the police but my boss said: “it’s no use, this happens.” And I cannot accept that – I’m too Portuguese for that.’ She thinks for a moment. ‘Brazil seems like a black period, and when I arrived here I felt like I finally belonged. Here I can make a difference. You know, when I die and go to heaven, I will ask: “why did you let me be born in Brazil?” And I think the answer will be that God wanted me to see how bad Brazil was, so I can’t say bad things about Portugal.’

What passport do you have?

‘Just the Brazilian one. I have to wait 10 years to apply for one. But I already have the residency papers. I don’t need a visa to travel within the EU.’

Before you arrived here, what did you expect Europe to look like?

She’s silent for a while. ‘I’m a dreamer. I make movies in my head. I expected forests, old buildings. Like in fairytales, but it’s better. Because it’s real.’

Pedro, who is getting bored, throws his pacifier on the floor again. ‘With a baby you don’t need to go to the gym,’ she says.

What is your opinion of the EU?

‘I haven’t thought about it. It is not part of my world. So my opinion would be really superficial… You know, I haven’t watched TV or read the news for the past 10 years. When I want to know something, I want to find out in my own time, my own way. On the Internet for example. What is really affecting my life, I want to know, but most news doesn’t affect my life. The price of baby food, for example. If there’s something going on there, I don’t need to read it in the newspapers, I will see it in the shop and I will have to pay anyway. When people in the bus or on my husband’s job complain about the crisis, the troika, I’m not interested at all. “You need to know,” people say. But why? I have to pay taxes and bus fare anyway, whether I know about the issues or not.’

So you expect other people to think for you, the politicians you vote for, for example.

‘I vote, and when I do, I first do a little research.’

It’s a Tuesday morning in Lisbon. On the terrace some old men are reading newspapers, smoking little cigars. ‘The quality of life is very high here,’ Camila says. ‘We don’t make a lot of money, but my husband has time to walk two hours a day in the park. We have these amazing places around us, like Sintra, or even this park, de Estrela. The beach is half an hour away. I love it here.

‘People can’t hear it when I talk. They think I’m Russian, because I’m blond and have blue eyes.’

How are immigrants treated?

‘Usually they are seen as cheap labour, who don’t dare to complain. Especially the Africans, who are hired for the dirty work. Black persons are stopped by the police more often.’

The Brazilians are still seen as Indians, who have to work for them. But they feel superior to everybody – although maybe not to the Germans, because of the money.’