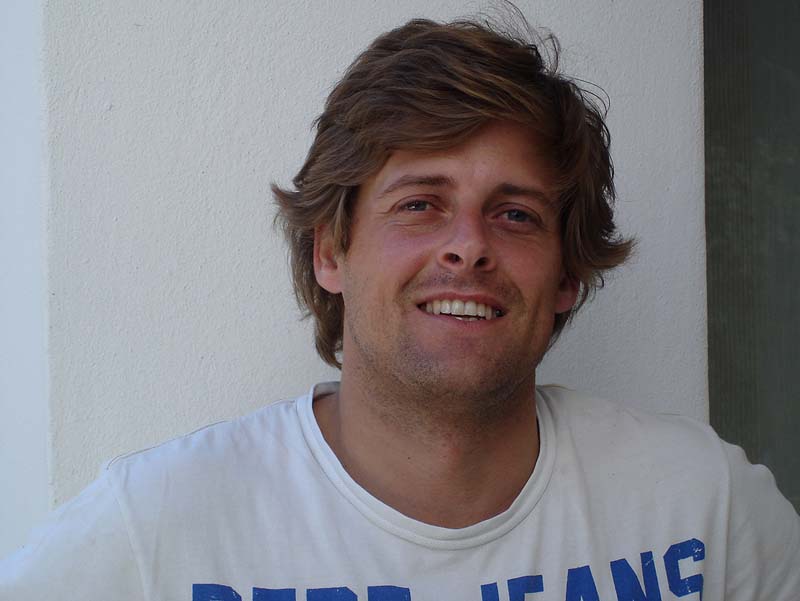 He’s founded and sold a magazine, started a raspberry farm, and written two books. For most people this would be a lifetime achievement, but Antonio is only 32. ‘I wanted everything. I wanted women, I wanted to be a good sportsman, to party and to read, to think and do, I wanted to travel, but I also wanted to be in Portugal. Live life to the max, without constraints. Without concessions, although naturally I have made some. I’m married now; I am committed to being a father.’

It’s a Sunday afternoon in Estoril, a picturesque coastal village just outside Lisbon. This is where fashionable Portuguese people spend their weekends. His wife, who is Dutch, and daughter are somewhere in the garden.  Antonio -jeans, sneakers – is relaxed and talks easily.

‘I’ve always been an entrepreneur. Always. As a student I organised parties, football tournaments, even bullfights, with really good horses. It cost 50 grand. We didn’t make a lot of money, but we had a great time. My motive for being an entrepreneur has always been the same: to have the absolute freedom to do whatever I want to do, without constraints. Even if that means that I don’t reach the top,’ he adds. ‘For me it’s not about money, but I want to have enough not to have to work for it, do you understand? 99% of the people would be unhappy if they didn’t work, they would not know what to do with their time. While I always find something that gives me satisfaction. I work because I like to make things happen, and that’s the difference between an entrepreneur and the person who merely talks.’

He runs his hand through his hair, something he does a lot.

‘At this moment I have the raspberry business and four companies, all under the name FIX. FIX Lisboa and FIX Maputo, Mozambique, both in communication, FIX Chic and FIX Social Engagement. That last one is run by my wife.’

‘What is the social position of an entrepreneur in Portugal?’
‘It is still considered “better” to work for a large multinational. But this is changing, partly due to the crisis. My father, for example, was prouder of my books than of my business. You know, we Portuguese did not really have a culture of working. We were happy here. Here someone who has achieved a lot without a lot of effort was considered more successful than the hard worker. I feel that is changing too, due to the crisis.’

‘How is this financial crisis affecting entrepreneurship?’
‘It’s unfortunate that the news is so focused on crisis, because you could easily fill a newspaper with new business ideas and successes. And you see a new type of business coming up: more value-added, creative, technology, tourism, sustainable. And our focus has changed: we focus on new markets, especially Angola, Mozambique and Brazil.’

‘Not Europe?’
‘Less. Because there competition is fierce; the former colonies are doing very well and we still share a common language. But we’re also in Eastern Europe, India, and in other emerging economies.’

‘How do you feel about Europe?’
‘I am a European; I really feel it that way. Also because I grew up internationally: my father lived in Brussels, my stepfather, a film director, was well travelled, an uncle who was minister of foreign affairs and in the European Commission. I have been fortunate enough to have travelled extensively. And read a lot: I think you can travel through reading. I believe that the European union is the greatest thing mankind has created even though it is now in danger: everything hangs in the balance. If the European project fails, we risk a quick run towards war. In these times it is easy to follow crazy leaders and that’s one of the major risks of Europe in crisis. And believe me, it’s going to be difficult to get out of the crisis: the Mediterranean countries really have to address their corrupt systems, have to stop spending too much.’

‘Isn’t Portugal a Mediterranean country too?’
‘Yes, and we are badly governed too. We always have been, and I’m afraid it will never improve. But at the same time it is perfect, in all its beauty. It is perfect – but not for everyone. Those who have access to capital,’ he says euphemistically,’ are not at the mercy of public healthcare, which is time consuming, don’t have to live in poor neighbourhoods, or go poor schools, even though some public schools are excellent and there are good doctors in public hospitals too. But there are contrasts. And there’s the crisis, which has seriously hurt morale. But we are used to that, it is fado, we sing and complain at the same time, we are always sorry – we are complex.’

‘You know,’ he says in a low voice as if revealing  a secret, ‘When we meet Americans, Germans or Dutch we never assume that they are better than us, on the contrary. We are better, we just don’t do a lot. Still: the second man at Goldman Sachs, second man UNHCR, the number two in the EU Commission, they are Portuguese. But we are not homogeneous. We want to feel special and that means we stand “proudly alone”, as Salazar, our former president said about the country.’

Antonio runs his hand through his thick hair again, leans back, and looks at his wife and little daughter, playing in the garden. ‘If Portugal was a human being, it would be a promising teenager, bright, a womanizer probably. A teenager who needs a strict father to keep him in line.’