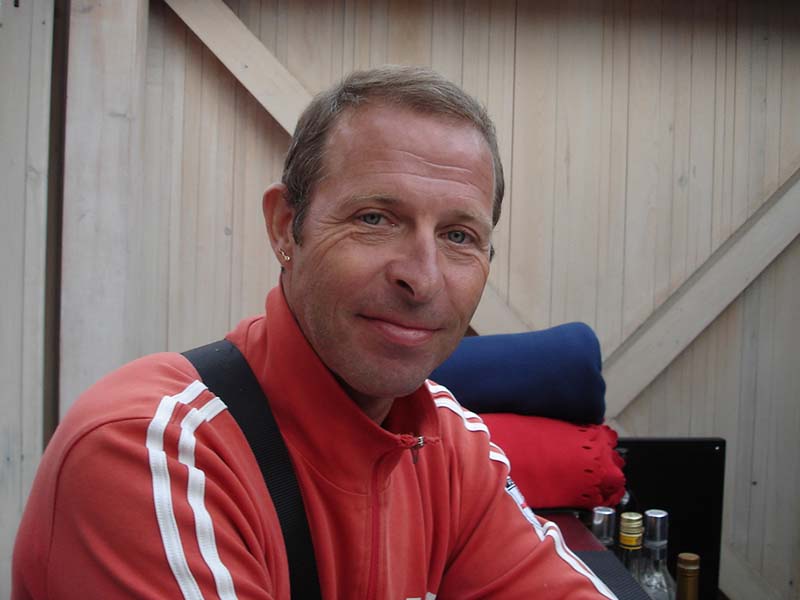 ‘I spoke a full hour about my filmmaking. Not many people know about that, even though I won awards for my films. I’m known as designer, or an artist. It went very well, I was just speaking my mind, like I always do.’ He is late, rushing from a radio studio. ‘The weather is nice, hey!’ He leans back, yawns, and looks around. We’re sitting on the small terrace of a kiosk near a park. He sips from an Aura, Finnish beer, eight euro a bottle. This is Scandinavia after all. Stefan Lindfors, often referred to as a Renaissance Man, is a man of many of talents. His designs are used for numerous products and exhibited in museums. The New York Times called his sculpture façade for the Gershwin Hotel ‘a new landmark’, and his film for the Finnish rock band HIM was named the Best European Video in 2004.

‘You have spread your talents,’ I say. ‘Is there a risk of spreading them too thin?’
‘I could have specialised, sure. I would probably have made a lot more money and had an easier life, but… Fifty years from now we’ll see that I have done the right thing, because I’ve done things nobody else has done. The beauty is that I’ve had so much fun doing it, and I’m proud of being good in all things. You know, I made the first downloadable film for Nokia-phones. My last video, for HIM again, had 3.5 million viewers in five weeks.’ Later that afternoon he would say that the Finnish are not modest, even though they think they are. Stefan is a prime example of that. He would also say that the Finnish are not outspoken, but if that’s true he is the exception that proves the rule.

‘Being different to your countrymen also brought you fame,’ I suggest.
‘You’re right,’ he barks in his raspy bass voice. ‘Yes, in the eighties I was a luxury item for the media, because I talked. And had something different to say. I was also critical of my profession and of myself; I have self irony. The fact that I was always in the papers was a source of envy to many, and still is. Last year I was in The Deal, a Finnish copy of that Donald Trump show. I did well, right up to the last round.’

‘Does it bother you that people recognise you?’ In the past twenty minutes almost every passerby has greeted him or shown signs of knowing who this man is. He is dressed in a bright red running jacket, wearing a snake-shaped earring, and he looks much younger than 54.

‘A bit. But if they didn’t recognise me, it would bother me more. That’s a brave dog, did you know that?’ Easily distracted, he points at an animal I thought was a rabbit. ‘A friend of mine in West LA has got one.’

‘What do you think of your country?’
‘It’s not a good country. It’s okay.’ He sighs. ‘We have become a class society, that I don’t like. I’m a social democrat. I like the idea that you are allowed to build your own company, and make a lot of money, but the more you make, the more you should contribute through taxes, so that the state can pay for police, health care and education. We now have people who make hundreds of millions and at the same time people who can’t afford to go to a dentist. So where’s the tax money going?’

An attractive woman passes, and Stefan greets her. ‘I don’t want to look arrogant,’ he laughs.

‘We are a very racist country. We just didn’t have enough to be racist about. I grew up in Turku and was severely beaten up for speaking Swedish.’

‘Now there are real foreigners,’ I say.
‘So now they can immediately see who to beat up,’ Stefan says. ‘In fact I will leave Finland soon, I guess. And the main reason is the weather.’ It’s end of June, about ten at night, but still very light. ‘Darkness sucks. But this light all the time too, it fucks me up.’

‘Where would you go?’
‘I’d go back to the States. I have lived there before, and had permanent residency as an outstanding artist, for nine years.’

‘So you’d leave Europe?’
‘Yes. I’m not a big fan. You know, during the elections in ’95, when we had to vote if we wanted to join, I was asked to give a performance on TV, stating my opinion on Europe. I put up a board with all the countries on it, with black lines. I used yellow, green, etc to fill these countries, so it was very colourful. The paint was still wet when the show started. Then I came in with a brush and started to mix all the colours, until it was brown… one colour. And not a nice one. And unfortunately it has come true. I think we are losing the strength of diversity in this continent. We are putting everybody under the same regulations, and as result some identities have been lost. We often compare ourselves to the USA, which I don’t understand at all. Because that was one place and they divided it into states, while in Europe it is the opposite: different languages, religions, stories.’

He orders one last Aura. ‘On the other hand, it’s nice here. Everything is close by. My apartment, my friends, my restaurants.’ He points across the street, to one of Helsinki’s harbours. ‘And there’s my boat.’

As he is leaving he shows me his umbrella. ‘It’s made by Puma, a very good one, great design. You see, the wind won’t blow it open.’

‘Did you buy it today?’ It hadn’t rained for days.
‘No, they gave it to me. People like it when I walk around with their products.’