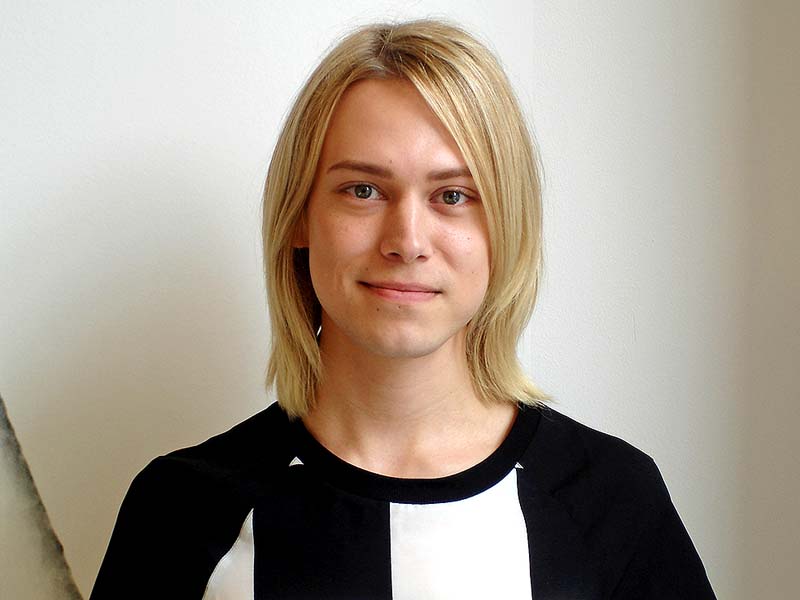 ‘I’ve been a hairdresser for five years already.’ ‘So you started really young.’ Joni is only 21. He giggles. ‘Well I started when I was 7, doing my sister’s hair.’

‘Do you still do that?’
‘Yes, and my parents’ hair too, unfortunately. They’re difficult customers… they’re so close. And very critical at the same time. But that’s good,’ he quickly adds.

‘Are you good at your job’
‘Yes, I think so,’ he says and sips from his green tea. ‘After this summer I’m going to be an educator. I’ll travel throughout Finland, teaching other hairdressers about colouring and the use of products, everything.’ Donna Summer sings Hot Shot on the loudspeakers. ‘I’m very excited about it. ‘I’m really proud. And so are my friends, they’re happy to see my career going great.’

‘Is that important?’
‘It is, a bit. Most of my friends are studying, business or they’re in medical school. I’m not stupid, my friends know that of course, but many people think hairdressers are stupid. So being an educator helps my image.’

What will you do when you’re 40?
‘Maybe open my own shop. As a hairdresser, and do some sales. Maybe develop my own product line, the future is open!’

And if you had to choose another profession?
‘I’d start a business. I’m very good at selling, you see.’ He lowers his voce, leans towards me. ‘None of my costumers leave the shop without some hair products.’ He points to the shelves behind the counter, well-stocked with shampoos and conditioners. ‘They’re Vidal Sassoon. He was my icon, it’s a simple as that.’ Sassoon, the God of hairdressing, passed away last year.

Joni crosses his legs, a small strip of red sock is visible at the top of his black All Stars. With his manicured nails, two silver chains on his wrist, and his slender body  he’s quite androgynous.

‘Is that special in Helsinki?’
‘It’s not an issue really. If your son is gay, it might be, but if your neighbour’s son is, it’s okay. I have more straight friends than gay and it’s fine with them.’ He thinks for a moment. ‘Although sometimes I feel that some male friends are a bit afraid…’

‘Let’s talk about your country. Do you like living here?’
‘Yes, a lot. It’s peaceful, so much nature. I even like the winter, the dark in Lapland. I love the four seasons. There are a lot of depressed people in winter, they take pills, but I watch my diet. I eat raw food, that helps me.’

‘Have you been to other countries?’
‘Sure. London, Paris, Stockholm, Estonia, Spain. I liked London and Stockholm. If I had to live somewhere else it would be Stockholm. It has the same feeling as Helsinki, but the Swedes are more outgoing than we are. More social.’

‘Do you feel European?’
‘No, I feel Scandinavian. Europeans are darker, they have brown eyes and darker skin. I like that type. That’s why I love Tel Aviv, lots of handsome dark guys.’

‘Do you vote?
‘Yes. I do it because I have the right, but I don’t think it makes a lot of difference.’

‘And what about, the Greece affair. Was it good or bad that the Finns were opposed to giving money to Greece? ’

Joni thinks for a moment, while George Michael sings Fast Love. ‘There are two sides to the argument. Greece could be more careful with their money, but we are all European citizens, we should stick together.’

‘What do you expect from Europe?’
‘I haven’t really thought about that.’

‘Do you discuss politics with friends?’
‘No, not really. I’d rather have fun.’