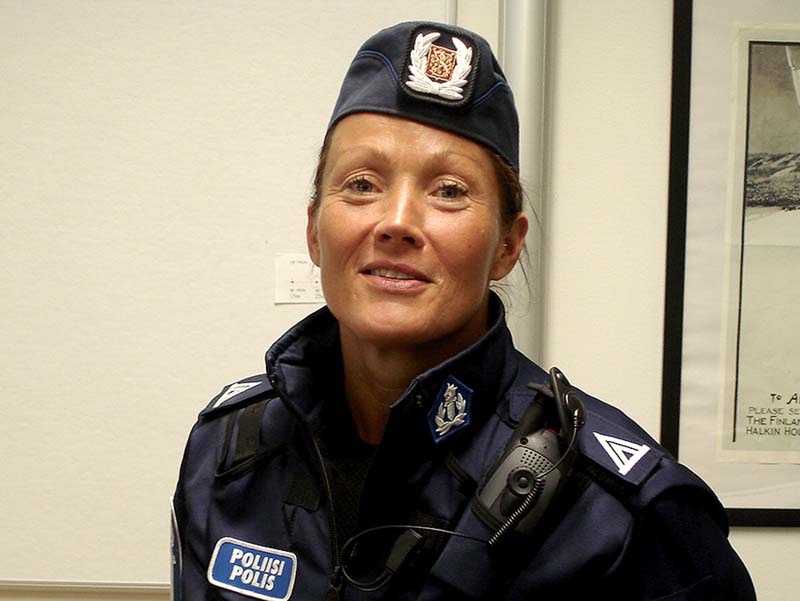 The interview was already five minutes underway and she was still sweating heavily. It was June and summer had finally reached Helsinki.  She had just arrived at the police station after cycling from her home. 40 kilometres. In full attire, including a bullet proof vest… ‘Normally it’s 25 kilometres, but I felt like taking a detour, it’s such a lovely day.’ Joanna is a group leader with the Helsinki police. ‘I’m in charge of ten men, and I’m replacing a guy who is in Afghanistan. Joan as a policewoman – you should name a band after that.

‘How much crime is there here?’
‘Not a lot. It’s a quiet country, not many upheavals. And the percentage we solve is still good. People trust the police, we’re not corrupt. We want to keep it that way.

In many countries the police are much more visible, and there are more policemen per capita. In Finland, there are only 9,000 policemen and the number is falling because of job cuts. So I’m extra busy, especially in the summertime. My team works on the street and there are more people out and about now, more concerts, things happening and even less staff.  A lot of my colleagues are on holiday.’ She uses a napkin to wipe the last drops of sweat from her forehead.

‘I’ve been a policewoman since I was 30. I’m 41 now. Before I worked as an economist, but I got tired of it. It was difficult to get in then, all kinds of tests, it’s much easier now.’

‘What made you want to become a policewoman ?’
‘Well certainly not those reality series. There are a lot of them but I don’t like them. The tasks are real, but the dialogues are so fake. Can’t watch it. Especially when there are people in it I know, which is the case most of the time.’

‘What did your friends say about your radical career switch?’
‘Well, they said it was a bit stupid, that my salary would be less than half, etcetera… ‘

‘Maybe your friends also meant that a policewoman has less status than an economist?’
‘Maybe, but I have more free time now. And when I leave this job, I really leave it, I don’t take it home. And I still enjoy coming to work every day.’

‘You’re a group leader now. Where does it end? Do you want to be chief?’
‘No no, that’s not nice, I would loose touch with the street. And that’s the best part: the people. We have a lot of good laughs, although of course we see sad and horrible things. Every day is different.’

‘How was yesterday for example?’
‘Very quiet,’ she laughs. ‘We drove around and did surveillance near some of the embassies, especially the US embassy. And Egypt too, because of the political situation there. Nothing happened.’

‘You have been in the police force for ten years now. Has the work changed?’
‘Well, it’s still the same small group of people causing the all the trouble. We have some radicals, but very few. We keep in contact with them, the leaders of the football fans for example.’ We are sitting at the desk of one of Joanna’s colleagues. He’s in charge of security at football matches and apparently likes what he does, judging from the wall full of little flags and scarves from famous football teams like AS Roma and Liverpool, which have played against local team HJK. ‘We don’t have street gangs, no hooligans. But we are keeping an anxious eye on the riots in Sweden.  What happens there generally happens here two years later.’

‘But Finland has a history of violence: it had a civil war at the beginning of the last century.’
‘Too long ago, Joanna says in her calm, low voice. ‘It doesn’t play a role. Finland is quite homogeneous, even though we have new cultures now. But nothing too serious. There are still no ghettos here.’

‘Is the Finnish government good?’
‘Yes, I think they’re dealing with a difficult economic situation and they’re doing well. Other parties would not do better.’

‘What could they improve?’
‘More money for the police,’ she says.

‘Where would you go if you couldn’t live in Finland?’
‘Spain, for sure.’ She continues in Spanish for a while: ‘I go there a lot. Would love to live in Barcelona. Love the culture, weather. And you can travel there as a woman.’

‘What about Europe?’
‘Thumbs up for Europe. It’s so much easier to travel nowadays, especially with the common currency. And yes, it’s expensive, but we don’t know what the costs would be without. The Finnish Mark was bad and under pressure before the EU, people are forgetting. The economy is more stable now. But the EUcritics have more fans now. There was not enough support to help Greece. Too many people here without jobs said we shouldn’t throw money at them. I think we had to, what else could we do? And besides, it’s only money,’ she laughs.

‘What could Europe lean from the Finnish?’
‘That small can be good.’