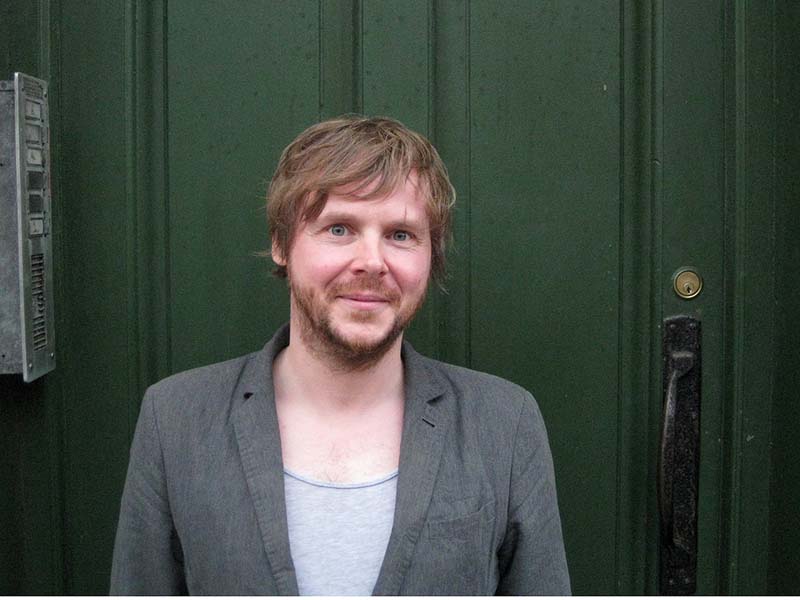 ‘They had signed us in Ireland and England already, but Atlantic Records US was very interested too. So we were flown into New York, for just one gig, a private show for some of their heads. We realised it was the most important opportunity in our career, our chance to make it in America. We arrived four days before and had started drinking from the moment we got on the plane, we had been doing a lot of drugs, staying up all night, screwing women everywhere, everything paid for. We were supposed to have dinner with the boss of Atlantic one night, but we didn’t show up, because we had forgotten about it. The gig was at eleven in the morning in some kind of rehearsal room, cold, no atmosphere at all and the heads of Atlantic were there, in suits and ties. We had not gone to bed that night, we played and we sucked. And we weren’t signed.’

This story is part of a long answer to the question how Irish he is. Very, Ollie said, because apart from being friendly and funny, Irish are a bit insecure. They fear failure, fear that they are not good enough. ‘Maybe it comes from being colonised by the English. When something really good is happening, I’m expecting it go wrong soon, that’s me: I don’t deserve this. My band had a lot of great opportunities, but we sabotaged ourselves almost on purpose.’

Ollie Cole was a singer with Turn, a band that scored hits in England and Ireland and was nominated for ‘Best Irish Band’ in 2005 and 2006 but they lost to U2. At the moment he is pursuing a solo career and teaching song writing.

We meet at Whelan’s, Dublin’s best-known pub and venue. It’s four in the afternoon and quiet, but the heavy smell of beer gone stale and the walls crowded with pictures of world famous musicians speak for themselves.

‘Where is your picture?’
‘There are a couple of pictures here. There was a picture of me behind the bar, but…’

‘When you were in Turn?’
‘Yes.’
He may not be the hottest ticket in town, but Ollie Cole is still a well known and respected artist.

‘Does that help you in life?’
‘No, not really. Well, you get in to places for free. And I get some attention from the girls, maybe. But I still have to pay for my groceries.’

Maybe it’s because he’s not the only good Irish musician. The whole world knows U2, but of course bands and singers such as Van Morrison, Sinead O’ Connor, The Corrs, Snow Patrol (‘used to be our support group’) are Irish too. And for such a small country, Ireland has also produced some of the world’s greatest writers, including Oscar Wilde, James Joyce, Jonathan Swift and W.B. Yeats. ‘So many outstanding artists, how do you explain that?’

‘Irish people are poetic. Great singers. We’re good with language. And nearly everybody in Ireland can sing. I went to a family party last week and there everybody sang a song, my father would sing, my mother, even little girls of 6 years old, they sing unaccompanied and then go out to play in the garden. It’s in our genes. It was only when I started travelling that I realised this. Like I when I was in Italy: they’re no good at music. They’re good with the eye, not with the ear.’

Neil Young sings After the Goldrush.
‘How do you write your songs?’
‘I care about melody above anything else. Melodies nowadays are a lot shorter, simpler; maybe we live in a time where things need to be very instant, these hits are like ringtones; they don’t take a lot of effort from the listener. We just want: all the single ladies, all the single ladies.’

That’s what happens when you interview a singer: he sings a lot. ‘Is it hard work, song writing?’

‘Sometimes. But sometimes it happens that you don’t have to write songs, they simply come. Especially with love songs, sometimes when I want to say something really nice, the music comes from inside.’

‘How do get into that state? You need to be relaxed, is it alcohol?’
‘All of it. Alcohol works especially well the next day. There’s an hour or two when you might still be a little drunk and tired as well, when you’re not forcing anything and the connection with the soul is open. And as with most artists , as soon as you wake up you’re very creative. No one has called you yet, you haven’t made plans, you’re like a baby. I have a recorder on top of my piano and record what I’m playing early in the morning. When I listen to it at night, when I’m making dinner, I can’t even remember having played that, I was half asleep, but sometimes great songs come from this first tune in the morning.’

David Bowie sings Starman as the place starts to fill up with people drinking and waiting for Whelan’s concert hall to open.
A cigarette break and a change of subject: ‘What is your feeling about Europe? Do you feel European?’
‘Yes. That’s probably different from most other Irish, because I have travelled a lot. Things got a whole lot better here when we joined the EU. There was no money then, it was worse than it is now. It is a safety blanket for Ireland. I think that the Irish like to be part of a bigger thing, no matter what they say. They feel safer. And we’ve seen more Europeans since we joined, maybe that helps us get to know Europe top feel part of it. For years Ireland was the place you left, now the past fifteen years a lot of people are coming here. So many Polish, Nigerians. It helped to give the city a more European feel. It feels rich to have so many nationalities around, even though you don’t always interact with each other as it is still pretty segregated.’

‘How is Ireland governed?’
‘Terribly badly. And we have a long history of this. The people have accepted it, they have forgotten that it‘s this bad. They don’t protest anymore. Many politicians are corrupt. Ministers that gave loads of land to friends. Democracy doesn’t work in this country, because nobody cares. Though the court cases against the politicians are changing that, there are really a lot of government people in court. Now they know they can’t get away anymore.’

Paul Simon sings Graceland, we discuss his latest album and order another pint.
‘You know,’ Ollie says just before he leaves, ‘for years I had to think every day about our New York failure. Getting older helped me to get over it, because now I don’t care as much about what other people think of me. It’s no longer about winning the race, but how you run it. Success is not as interesting anymore. And how do you define it? Do you understand?’