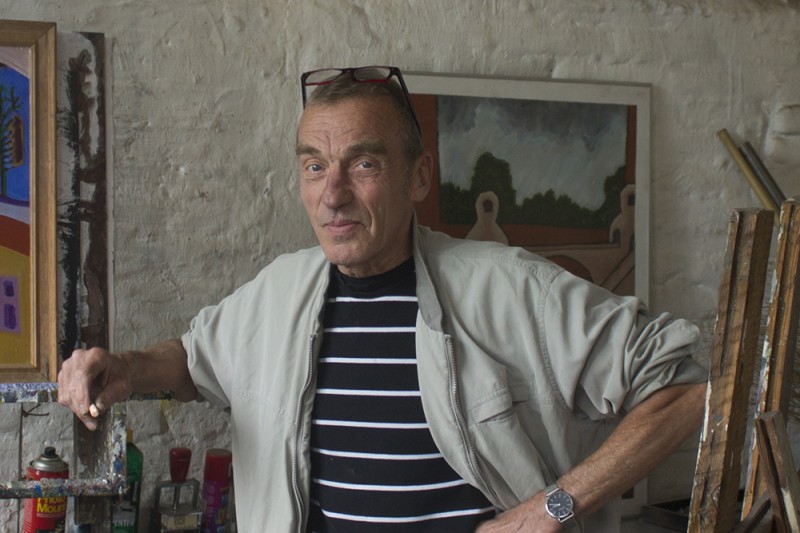 Christiania is a self-proclaimed autonomous neighbourhood in the centre of Copenhagen where approximately 850 (ex-) hippies live. Squatted in the early seventies, the area is now a tourist attraction, but also the place to buy soft drugs. Over the years it has also been the scene of a number of pitched battles between the police, hippies and motor gangs, with more at stake than drugs alone.

The area’s wooden entry gate reads ‘Welcome to Freetown Christiania’; the sign on the other side of the gate says ‘You are now entering the EU’. The gate was built by Finn, a 72-year old artist, working in Christiania.

‘I was one of the first to live here. I remember well the very first guy, I used to see him at when I returned home, as I lived close by. He had a very friendly dog…’ He takes a deep drag on his joint and passes it to one of other two Christianites sitting around the table of his workshop. In the past he tried to follow a more routine career path; he even studied economics and once worked for an insurance company. ‘But I couldn’t work for a boss who was not as smart as I am.’

I’m not sure if it this is a joke – a recurring feeling during the interview.

He has just returned from Ghana and two of the paintings inspired by his trip are standing in a corner. Colourful canvasses, one blue with three heads, the other of a young girl on a beach.

Can you live off your art?

‘No, I can’t,’ he says. ‘Most of us can’t. A few are supported by the pushers though, who provide them with canvasses, paint and free drugs.’

And is there some kind of government support for artists?

‘Not for us. We are anti-establishment. But at the same time Christiania is the main tourist attraction of Copenhagen. One million visitors a year. More than Tivoli, the fairground.’

I doubt that this is correct, but during our interview groups of tourists enter the workshop: their official Christiania guide even asks Finn to pose for some pictures. Outside, on one of the squares, a band plays The Doors.

‘It’s okay. I can really focus, I’m not easily distracted.’ And he can multi-task: he’s smoking, talking and cutting triangles from maps and sticking them on tiles.

He doesn’t live in Christiania anymore. ‘I live a bourgeois life,’ he laughs: ‘I live next to my daughter and every day I get up early to go to my job.’ He coughs dangerously from time to time.

I mention his gate and ask him what he thinks of the EU.

‘Not at all,’ says one of the other Christianites, a woman with long teeth wearing a ski jacket. ‘It doesn’t work. It was constructed by the Yankees, so that they can get at the oil.’ She launches into a series of conspiracy theories, none of which makes any sense. ‘In 1992 they added a rule to the Maastricht Treaty, making it possible to arrest foreigners who have been in Denmark for more than two weeks.’

When I express my doubts about this statement too she says: ‘You really should read it, it’s there between the lines.’

The air is thick with the smell of the joint, a second one, that’s being passed around.

‘Christiania is the future of Europe. In twenty years everyone will be growing their own food, and thinking like us,’ Finn says. ‘Look at the way we take decisions: by consensus only. That is real democracy. It only takes two intelligent people, able to convince all the others. That’s how it works here. Do you want to renovate the drain? Convince all the others that it is necessary.’

‘Finn, tell him your stories about Syria again!’

He starts to tell a story about monks and bikes, while cutting the triangles. I don’t understand a word of it.

In Finland artists are sponsored by the government, I tell them.

‘Okay, we should go there then,’ he laughs, and immediately starts coughing violently.

Another group of tourists walks into the workshop and I leave Christiania, entering the EU.