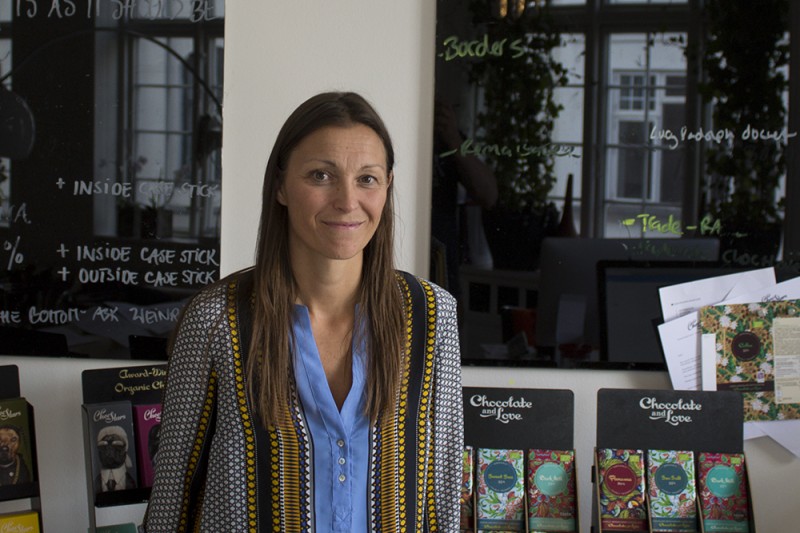 ‘I think the green of the leaf should be a little greener, can you do that?’

Birgitte and her Scottish husband Richard are discussing the packaging of one of their chocolate bars with their New York-based designer, via Skype.

On the shared screen of their iMac the green gets greener. Birgitte and Richard take a step away, studying it intensely as if it were an important painting in a national museum.

‘Yeah, much better. And what if you drag it a couple of millimetres to the right, yes, like that?’

Birgitte comes over to the other side of the office to where I’m sitting, ready for the interview, during which Richard continues the discussion with New York. They could go on for hours – it is about their babies, the Chocolate and Love bars. And their search for perfection has paid off: their award-winning flavours Panama, Filthy Rich, Mint, Sea Salt (my personal favourite) are all beautifully packaged.

Exquisite, ethical chocolates. Chocolate and Love is organic, fair trade chocolate. Chocolate and Love supports reforestation. That is what they say on the website of the brand they founded in 2010. ‘Twenty months ago we were in two countries, now in 33. We have been told we are among the fastest growing food companies in the UK.’

They run their company with a staff of only six people, operating from the UK and Copenhagen. The Copenhagen office is also their living room, as carefully designed as their chocolate bar wrappers. Wooden floors, high ornamented ceilings, iMacs, nice art on the walls, a balcony overlooking an attractive little street in the heart of the city – it is the kind of living and working environment you see in glossy magazines.

Birgitte (43) used to be a lawyer, first in Denmark, then in Russia, where she set up the Moscow branch of the firm. ‘Which was quite a challenge, and my first big step as an entrepreneur. I had a lot to learn about client acquisition.’ After a detour to Barcelona, where she started a high-end event company catering to foreign companies (‘I had to do a lot of research, checking out the very special places where these events were held; it was really quite a nice job’), she returned to Denmark, met Richard and founded Chocolate and Love.

‘My parents were running an engineering business,’ she says, holding her daughter on her lap. ‘So being an entrepreneur was not foreign to me. In general, I don’t see the Danes as very entrepreneurial – though Richard does. We’re like the Dutch, a bit. Outgoing, knowing a lot of languages. But we are not that brave and entrepreneurial, we don’t have that in our genes in general.’

‘Maybe we have to dig a bit deeper…’

‘Denmark has a few big, impressive multinational companies, like Maersk, Novo Nordisk, Carlsberg and Lego. Denmark is home to a lot of biotech businesses too. But it is not that easy to start and build a company in Denmark as wages are very high. To set up a company you need to have 10,000 or 67,000 Euros in an account, depending on the type of business, which is more than in other countries. But on the other hand it’s the ideal place to start a business. If the company doesn’t work out, the government gives you an unemployment benefit, free health care, schooling. In many countries you’d lose everything. Here you’ve got a lot less at risk. And that is the downside at the same time: the fat safety cushion breeds laziness. Many people are not hungry enough… they do not want to put in the hours. Setting up a business is 99% perspiration and 1% inspiration. From what I hear, it is quite difficult as a small start up to get governmental support from the public venture-capital fund, Vaekstfonden. You need to have a certain size to get funding. Hopefully more funding will be given to green technology start-ups.’

‘On a humanistic level I believe that the states working together prevent wars. And there’s the trade and commercial side of the EU, where I think that having the same currency is a good thing. We are facing a lot of currency issues in our business: Euros, Kroner, Pounds. It’s a waste of time and money. The only ones gaining are the banks.’

Her daughter is still sitting on her lap, quietly, Birgitte kisses her on the head from time to time: when you’re being enterprising in your own living room, you run the risk of having to be both a businesswoman and a mother at the same time.

‘And we don’t have to pay VAT when trading within EU. Trading within the EU is relatively easy. And we should know: we do business with lots of countries outside the Union. The amount of export documentation that we have to deal with is horrendous…’

‘Yes. And privileged. We live in a privileged part of the world. I feel more Scandinavian; there is a difference between southern and northern Europe.’

Is there a halfway point, a country that has both? Southern Germany, Austria?

‘Yes, maybe… You know, in Spain you can see two men randomly meeting on the street, and when you come back an hour later, they are still talking. Maybe one has seated himself on a bench, the other has grabbed a chair from a café, and then they get some coffee and they sit and chat. And that is brilliant. We should learn to just be in the now in the north. Here in Denmark, people organise a dinner two months ahead.

I think the Danes are quite result oriented, good at making decisions and executing them well. I experienced the difference in Moscow where people are much more process oriented. Here in Denmark people, at least in some sectors, are trained to finalise the job.’

Is it necessary to have a cultural union as well?

‘It is so interesting that our differences are determined by where we come from in the world. We should support cultural exchanges, that is really important for the younger generations, get them to travel. To learn from each other. To be open minded. To have your way of thinking challenged – and that’s also an important asset for an entrepreneur, to be challenged and to enjoy it, to embrace uncertainty, to be brave. Being open minded and tolerant also prevents conflicts.’

On Skype, over the speakers, Richard is still talking to the designer in New York when I leave the office : ‘What if we make the circle a little more red?’