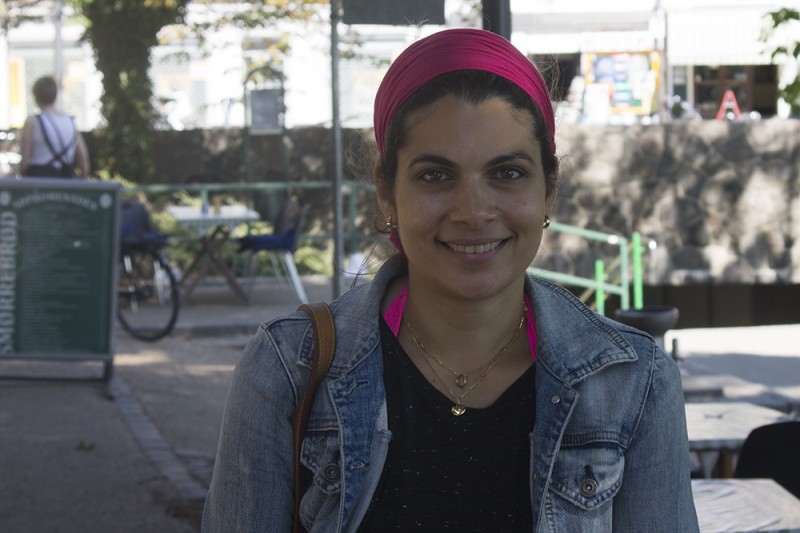 She is a doctor and an immigrant: Azadeh is from Iran. Her mother was a diplomat who had heard, in ‘79, that the revolution was on its way, so when her husband was offered a job in the Ivory Coast, the family knew they’d better take it. Azadeh was only 1 year old then. It was the first stage of an odyssey around the world that would end in Denmark. A country she knew because she had lived there as a child. ‘So when I wanted to study medicine, while I was living in England, my dad suggested going to Denmark, as education there is free and I spoke the language.’

She speaks Farsi, Danish, French, English (with an American accent). ‘My her parents are US citizens, so for the past 20 years I’ve spent my summers in the US). Her husband is Faroese. ‘So our children grow up learning three languages: Farsi, Faroese and Danish.’

Why did you decide to stay on after you had finished your studies?

‘Because it felt like home: it was the country that I had lived in the longest. And I had met my husband, and had made friends.’

So now she works as a doctor at the Rigshospitalet, in the centre of Copenhagen. During my many interviews with doctors it has occurred to me that they are quite similar in general: well educated of course, internationally oriented, very responsible and dedicated.

‘I know,’ Azadeh says. ‘I know many who are like that. But I’m a bit of an exception, in the sense that I am not overenthusiastic about my job.’

‘I don’t like being a lone ranger, doing my rounds through the wards on my own, while the nurses get together and socialize. I miss being part of a group, working in a team. And the working conditions in general for young doctors are not very good, at least not in my opinion. That is why I’m even considering looking for another job, maybe at Unicef, or another NGO. Or in the pharmaceutical industry as a medical advisor.’

That’s a rare occurrence, wouldn’t it be a shock?

‘It is. It would be a huge step out of the closed circle of doctors that all of our friends belong to. At parties they always talk about hospital-related topics. I sometimes feel sorry for one of our friends who isn’t a doctor, but in marketing. But I’m the only one I know personally who has considered taking such a step.’

How do you think will they react?

‘Maybe they won’t understand it, and they may judge me. Because the common opinion is that you become a doctor to save lives, that it is something you wanted to become all your life. And they might think I’m leaving simply because of better working hours and the money.

But then you would be able to buy them beers, and win them back.

‘I like Europe, and I like the idea of the EU, though I’m not always a fan. I don’t want the EU to meddle into small things. They should look at the big picture, the general perspective. But when they start deciding over small matters that are part of the country’s tradition. Like the thing with the Danish pastry. The amount of cinnamon in this type pastry is governed by EU-law… it was in all the newspapers: why should they decide what kind of cinnamon we use, and how much of it? Something we’ve been doing for hundreds of years…’

And nobody has died so far.

‘Exactly. Let the countries have their traditions and their own cultures. This diversity is in fact the best thing about Europe.’

But you enjoy the other acknowledged advantages of Europe, like being able to travel freely?

‘I have an Iranian and an American passport, but I am considering applying for a Danish one. They have only very recently changed the law, so it is possible to apply for a Danish passport without having to give up your others.’

And you could work anywhere within the EU, because your diplomas are valid anywhere.

‘Yes, but don’t you think the language might be a problem?’

But all doctors speak English!

‘Not all patients do. But with Norway and Sweden it is very easy.’

Do you talk to other doctors, internationally?

‘Yes, especially with Norwegian and Swedish doctors, because they come over to study. Some Polish, and I know quite a few Iranian doctors: I don’t know why but many Iranians decide to become doctors. And to one of my closest friends, who is Macedonian.’

Is that the southern connection?

‘Yes, it is. I like living here. But my brother, for example, tried but couldn’t. He thought the Danes were too reserved. I can cope with it. You know, my theory is that in the Nordic countries they drink so much – they do – because they need it to open up. It’s such a difference with the US for example, where everybody talks to each other, on the streets wherever, about the weather, doesn’t matter. Danes are closed and reserved, but also polite. No, not polite: they don’t hold doors open for a woman or offer a seat on a bus. No, they are civilised and correct. They can stand in line for an hour, patiently waiting for their turn. Even if their question would take 5 seconds. In Dubai, where I lived during my high school days, the people don’t believe in standing in line in the same way. They ask their quick question and then get out of the way.’

Maybe they don’t help because in Denmark everybody, men and women, are supposed to be equal?

How do you feel? Danish? Iranian?

‘As I get older I feel more and more Iranian, it’s funny… I like to get back to my roots. But in my day-to-day life I feel very Danish. Most of my friends are, I feel at home with Danish culture, I know exactly what to say, what the humour is like and what is expected of me in a public situation. I don’t feel very American these days, even though I have a US passport. Don’t let them hear that!