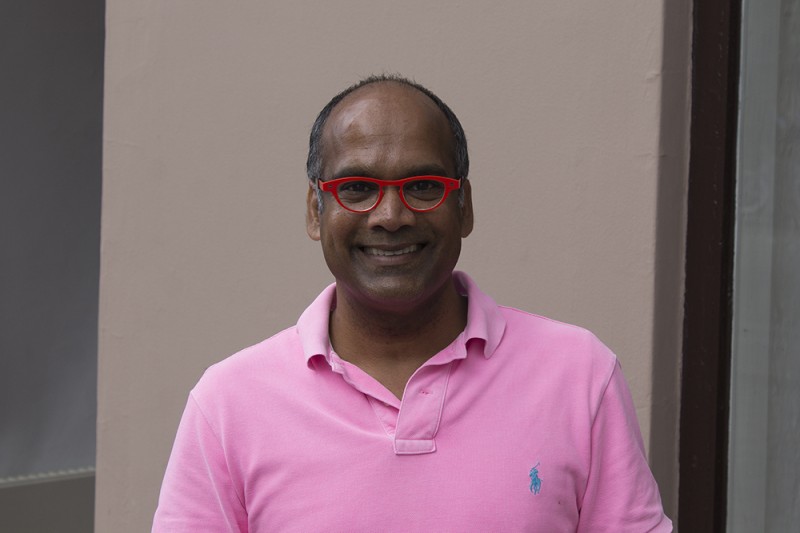 ‘That is a very special place in Copenhagen,’ Andy says, pointing to the square in front of the salon on Ved Stranden. ‘This is where the first gay couples got married, for the whole world to see.’

His brother was one of the first to marry. Enthusiastically he proclaims: ‘Jesper asked me too on New Year’s Eve, but then he immediately forgot about it!’

Maybe you can ask him next time? I say. That’s the advantage of gay marriage, I assume: if you’re both male you don’t have to wait for the other person to ask – but maybe that’s a heterosexual point of view.

‘He does!’ Jesper says, three metres away, colouring a customer’s hair. ‘He has asked every Friday for the last 10 years.’

And you said no every time?

You should find another man, this is not good.

‘But we have a very good life together,’ Andy says.

‘Yes, we are very fortunate.’

The two of them work in K2O. Jesper has been a hairdresser for almost 25 years; he started about the same time as Andy, now 47, decided to swap tropical Trinidad for the cold Copenhagen winters. The reason: the blue eyes and blond hair of his loved one. And because of Denmark’s liberal attitudes towards gays.

‘Denmark is like a paradise,’ Andy explains. ‘You can work here, gain respect and opportunities and there’s practically no discrimination.’ Although he found out that life can be tough without a job. ‘When I became unemployed I asked Jesper if I could join him as a hairdresser.’

How do the Danish treat foreigners and dark people in general?

‘To me they have been very positive. I think it depends on your own attitude. If you are positive and smiling, that’s what you get in return.

As a former dental technician (‘My ex-boyfriend was a dentist and he offered me an apprenticeship’), it was a big step to start cutting hair, but fortunately he turned out to have the necessary talent. ‘I learned very fast,’ he says. ‘I’m good with my fingers and Jesper had a lot of trainees before me who didn’t work out.’

Back in Trinidad he had all kinds of jobs: in a supermarket, a bookshop and a pharmacy. But being gay is against the law in the former British colony in the Caribbean. ‘My brother went to Denmark first. He told me what it was like. When I visited for the summer holidays I decided I wanted to stay.’

Do you have the Danish nationality?

Was it difficult to obtain the passport?

‘No, not at that time. Today it’s very difficult to become Danish.’

‘I can understand in a way. Because when it was so simple, everyone wanted to come to Denmark. And it’s a small country. But if you want to help the whole world, you have to make sacrifices. That’s a problem right now, because people are coming from everywhere: from Africa, but also Spain and Portugal. And they work; companies prefer the cheap labourers.’

So people from southern Europe have replaced the others, because they’re cheaper? But there must be minimum wages here?

‘Yes, but we hear they’re not getting that salary. They earn a very low salary. If they have children, say for example in Poland, they get benefits for their children, even if they are working in Denmark. Also you can get unemployment benefits after one month. At least, that’s what we read in the newspapers. But if you are Danish, you have to become member of a trade union to get all of these things. And you have to wait two years for benefits.

Moving on to a completely different topic, I ask about the Eurovision Song Contest, which took place in Copenhagen last May. Austria’s Conchita Wurst was the surprise winner.

‘I loved it so much. The festival centre, is opposite from where we live, on the other side of the bridge. I got 4 tickets from one of my customers, so I invited my neighbours. It was really exciting.’

Why is the Eurovision Song Contest so popular with gay people?

‘I think it’s very feisty. There’s a lot of costumes and songs and sometimes you just need to go out and have a lot of fun.’