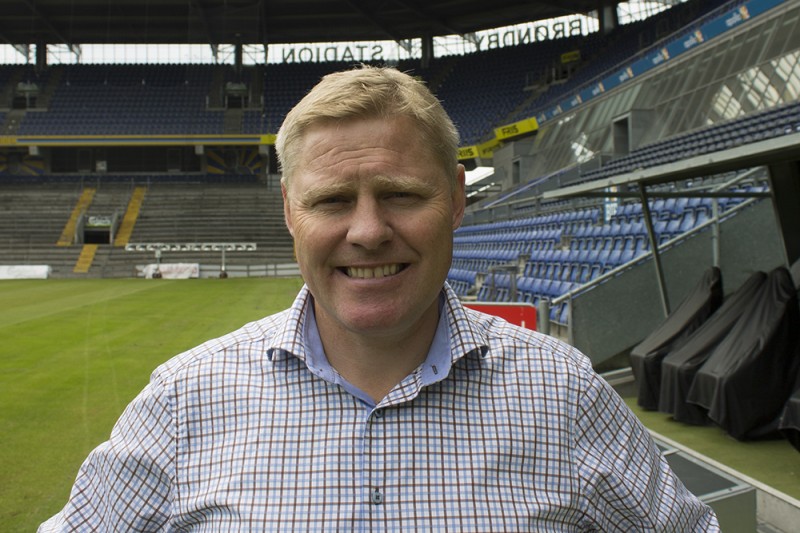 It was one of the biggest surprises in football history: the Danish team that won the European Championship in 1992. They were only allowed in because Yugoslavia had been excluded due to the war. At the very last minute players were called back from their holiday addresses; many were already at the beach getting ready to watch the European Cup on TV. They were laughingly referred to as the ‘camping team’. They won their final match against Germany, and Henrik ‘Store’ Larsen was their top scorer.

Now, more than 20 years later, after a successful international career as a player, he is commercial manager at Brøndy, Copenhagen’s biggest team, and FC Copenhagen’s greatest rival. ‘Football is big business, and a club like Brøndy has a big budget. My job is finding ways to bring more money into the club.’

How did you make the switch from player to commercial manager?

‘I have always been interested in the commercial side of football. When I was 18 my first professional club was Lingby. Every day I went around to the office to see how the finances were done. It always interested me to see how clubs sold tickets, dealt with sponsors and all that stuff.’

You played with clubs from around Europe, in Italy (Pisa), England (Aston Villa) and Germany (Waldhof Mannheim). Do you think that was more complicated then than it would be today?

‘When I first went to Italy, I did not know the language. That was a big issue in the beginning. It was in the days when no Italian wanted to speak any language other than Italian. After four months, I spoke the language, and my problems were over. Later I played with Russian players in Germany who never learnt German: they were not part of the group.

At the beginning of the ‘90s, there were only two foreign players allowed in Italy’s Series A. After1995 that started to change. You may remember the famous Bosman arrest: the Belgian player who in a case against the UEFA established in the European High Court that such regulations were in breach of European laws governing the free transfer of labor. It has changed football dramatically. And it is interesting to note that the UEFA will probably change this in the next one or two years: I expect them to pass a rule that says that a team must have at least five or six players on the pitch that are schooled by the club itself, at least for a certain period, and who can’t be bought. Another breach of the freedom of transfer concept.’

The interview takes place in the restaurant of an empty Brøndy stadium. Grounds men are preparing the pitch for next season, TV screens are replaying yesterday’s World Cup’s matches. Holland is doing well, they have just beaten Mexico, so I ask Henrik how Denmark is doing in the Cup. A joke of course: the country didn’t qualify (and not a very good joke to make in the presence of Henrik Larsen. His knickname ‘Store’ means ‘big’ – and he certainly is.). ‘After 2004 things went downhill with the national team,’ he says. ‘Football is still the biggest sport, but people aren’t that interested in the national team anymore. They failed big time. When I was playing, matches attracted up to 40,000 spectators. Currently it is between 15 and 20,000. The fans do not want to pay money to see the team lose.’

About Europe. What does it mean to you?

‘When you have lived in different European countries, as I have, you feel you are a part of Europe. I feel I am European. In Italy, England or Spain, it does not feel like I am abroad. And in my view it is a bit of a pity that we do not have the Euro in Denmark, by the way. Having the same money makes it much easier to get around. But I live as a European, though of course I am a Dane at heart. Especially when we play football against another country. But as a peace project, as an economic project, I think it is the right solution.

I think most people do in fact see the EU as an economic union. But I think in order to make the European Union more successful, more people should be prepared to say that they feel European. Do you think football could play a role it that?

‘You see what football can do to a country. Look at Belgium, a country normally very divided; it is now united because of its World Cup success.’

What would you think of having a European football team, playing against the other continents?

‘Well, that is the idea of the Ryder Cup. Nice idea. Sport unites. At least we have the European Cup, and as you know in 2020 it will be played across Europe, in 13 cities instead of in just one or two countries.’

You were the top scorer of the legendary Danish team. Are you still recognized for this success in 1992?

Henrik laughs. ‘Yes, yes, of course. It is Denmark’s biggest football achievement. Today’s kids did not see it of course, but their parents tell them about it. You get used to the fame after awhile. And Danish fans don’t go to extremes to celebrate their players.’

‘Do you get privileges because of your fame?’

‘Celebrities can go to movie premieres every day. I don’t do that. Football players are very level-headed when it comes to the fame thing. I’d rather buy my own ticket and enjoy the film with my own family. And not have people wanting to take my picture. I only go to public events related to football.’