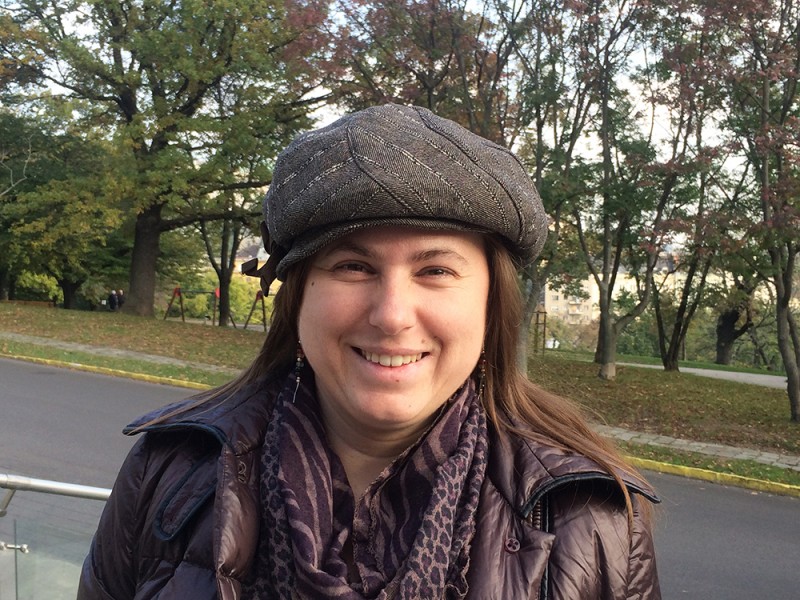 We meet up at a wellness centre close to Judit’s office, in the centre of Budapest. As we take our seat in the cafeteria, I catch myself waiting for Judit to sit down first. After she’s seated I pick the chair next to her. I figure sitting opposite to a chess grandmaster is not the best idea if you want to keep the upper hand in an interview.

The story of Judit is almost as exceptional as her talent. Judit and her two older sisters were homeschooled during their entire youth, as part of an educational experiment on the part of their parents. They believed geniuses are made, not born, and wanted to prove that children could achieve anything with enough training from an early age. As a result, Judit is by far the best female chess player ever, having won the title ‘Grandmaster’ in 1991, when she was only fifteen years old. She has travelled all over the world and has defeated ten former world champions, big names like Karpov and Kasparov. Even though she retired in 2014, Judit is still a celebrity in Hungary.

‘I do still get recognized on the streets’, Judit smiles. ‘I don’t mind it, it’s part of the package. I don’t like being favoured because of my status, though. That’s a wrong way of treating people.’

Have you ever thought about raising your kids the way you were raised?

‘I discussed this with my husband. To me and my sisters, it was a very special way to grow up. The education and lifestyle my parents created for us were their priority number one, two, three, four and five. That takes dedication, they were extremely focused on us.’

They must have been very unselfish.

‘Right, this was their job. They’re both educators and this was their experiment. Their job was to prove that they were right about this. Me, I wasn’t ready to give up my job for my kids, and neither was my husband. For us it was particularly important to have our kids start learning foreign languages and seeing different countries at a young age, to experience different cultures.’

Despite all of her success, Judit seems to have remains pretty humble and down-to-earth. She carefully weighs everything she says, looking at me with her earnest brown eyes. She’s very polite, hyper intelligent and above all determined to pass on her love of chess to the next generation. In recent years, Judit set up Chess Palace, a chess programme for elementary school students. ‘For many years chess lessons were an after-school activity, Judit explains. ‘In 2011 it became part of the national curriculum, which means schools can apply for this programme.’

Shouldn’t these lessons be given by professional chess players, instead of normal teachers?

‘The problem is that there are not many chess players teaching. Besides, it’s much easier to teach the teachers the basics of chess, than it is to make teachers out of chess players,’ Judit smiles. ‘It’s about more than just chess. It’s about teaching the children life skills, making them think in a more global way. ’

In the 80s and 90s chess was very popular. The matches between Kortsjnoj and Karpov, and after that between Karpov and Kasparov, were the chess world’s equivalent of the Ali vs. Foreman fight; the whole world was watching. It seems to me that chess, like boxing, has lost some of its shine over the years.

Judit takes a sip of her drink, contemplating her answer. ‘I think the game is different now. It’s still very popular, a lot of people play chess. The problem lies with the communication of the International Chess Federation. For a large tournament like the World Championship you need at least six months of constant media attention. People don’t hear about it enough. That’s the problem.’

Yes, it could also make the sport better. Is it at a better level now than it was?

‘It’s different. Magnus (Carlsen, reigning world champion chess, ed) is a very special player. He’s actually the first player in decades who doesn’t pay as much attention to opening preparation. Karpov for instance, was very much a game player, he had a better game preparation. Carlsen however, will say in the middle of a game “I’m going to outplay my opponent”. He’s clearly the best player in the world at the moment.’

When speaking about chess, Judits eyes light up as if she’s in the middle of a mental game of chess. Looking at her, I realize it’s the kind of energy I miss when I look into the eyes of the ‘average Joe’ – or László, – on the Hungarian streets. A lot of people I’ve spoken to seem a little pessimistic about the social situation in Hungary, as if they are asking themselves “Why am I still here?”

‘People are frustrated in many ways’, Judit explains. ‘In some cases they have every right to be but on the other hand they just like to complain a lot.’ ‘It’s their nature?’ ‘Of course. Many things people are complaining about are true, but I believe you can change a lot by just changing your attitude. Greeting your neighbour, smiling. Hungarians often wait for others to solve the problem instead of taking responsibility.’

Hungary used to be the capital of a big empire. Do you think that might influence the disappointment of the people?

‘I don’t know. It might , but I think you should look towards the future, not focus on what used to be. You can look back in order to make things better, not to feel sorry for yourself. Especially in a world that changes so fast. You can resist these changes for a while, but you cannot stop them.’

Judit sits back into her chair. Politics is something she rarely talks about. She would rather let the queens and rooks debate on the eight-by-eight grids. Chess, perhaps, is the most honest and straightforward form of politics.

You have travelled to many countries playing chess. Do you think there’s something like a European identity? Judit furrows hers brows, struggling to find a satisfying answer.

‘I don’t know what is typically European. Every country has its own culture, so there are so many cultures and people in Europe. It’s easier for you I guess, you come from a country that accepts foreign cultures.’ Well, in the Netherlands it’s a struggle as well. People are afraid to lose their Dutch identity to these new cultures – if there’s even such thing as a Dutch identity.

It’s typically European to be tolerant, then?

‘I think so. And eventually the question is: How do the new cultures influence the local culture and what can immigrants bring to the country? Which is an increasingly interesting question to answer as more and more people travel in and out of Europe.’

‘Yes. Look at the universities, for instance. I haven’t been to university, but some young people from my husband’s family have. There, you have twenty different nationalities in a room, it’s natural there. To me, it’s very important to be around and learn from different cultures. That’s why I took my children to an international kindergarten. At five years old, they’d already met Chinese, Bulgarian and Norwegian children. That’s important, to accept and respect other cultures. You cannot start too early with that.

Walking outside, I realize that Judit is somehow the voice of the new generation Hungarians; forward looking, tolerant of whatever culture she encounters. I guess Judit is as European as it gets.