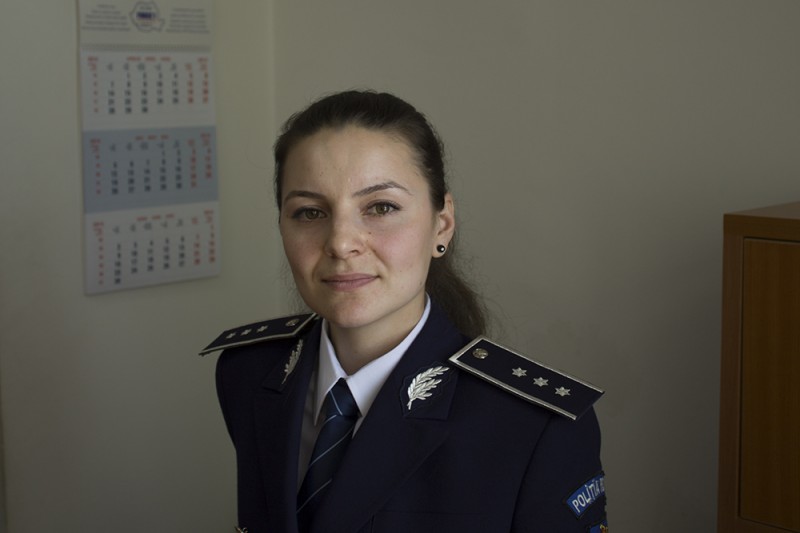 People are jumping out of the way, cars quickly swerving onto the pavement as we speed through the busy city centre, ignoring red lights. I’m sitting in a police car, its sirens wailing and lights flashing. I had mentioned that I had to be on time for my next interview. Very kind of the Bucharest police, much appreciated, but I doubt the Dutch (or German or Danish) police would have done the same for me but that is exactly what Youropeans is about: the interesting similarities and differences within Europe.

Less than an hour before, I was talking to Mariana, a policewoman in the police station of the 26th and last department. An old, somewhat rundown building, reflecting its surroundings: desolate grey apartment buildings dating from the communist days, old men sitting in metal-roofed sheds playing cards, barefoot boys playing on unpaved streets.

‘What a beautiful uniform,’ I compliment Mariana, who has obviously dressed up for the occasion. Because it probably is quite an occasion: we are joined by Iona, an interpreter, and allowed to use the commissioner’s office, a rather dark place packed with a large sofa and a pile of big cardboard packing from a sound system.

‘And what a pretty woman she is,’ Iona adds. Which is true, but also very important in Romania: women are supposed to be pretty.

(‘Do you think Romania is a macho country?’ I asked them later on.

‘Woman are very beautiful here and it’s understandable the men behave like macho’s,’ they answered, ‘but woman are accepted in every job they want. They are not discriminated against or undervalued. They are even preferred because they are more serious and organised.’)

‘When will this be your office?’ I ask.

‘I don’t know,’ she says in good English – Iona’s presence isn’t really necessary. ‘I would like to become chief, but for now my biggest ambition is to become a mother.’

Mariana is 30, her husband is also with the police.

‘Won’t that hurt your career?’

‘No,’ she says. ‘In Romania it’s not a problem. There is a period of one or two years, during which I can stay home to raise a child. My position will be temporarily occupied until I come back.’

She tells me that she loves her job, but that it’s getting harder for her to live. ‘Did you know that we are the only country in the European Union where the salary of police officers was cut by 25 %, two years ago? All of a sudden, because of the crisis? We consider this unfair because you have to be sure there is public order and safety for the people. In other countries they are not cutting the salary.’

‘Is the government doing a good job? Many of the people I interview say that the politicians are hard to trust.’

‘That is their opinion, but I know our president earns around 6000 Lei a month.’

Next week there will be European elections. Do you know who you are voting for?’

‘On the billboards I saw that Ilie Nastase is running too, the former tennis champion. Is he a good politician?’ I ask Mariana.

‘We only know him as a sportsman, not as a politician,’ Iona answers. ‘We don’t do politics. We do not express our political opinion in public. We are neutral. But we have sympathies and we vote just like other citizens.’