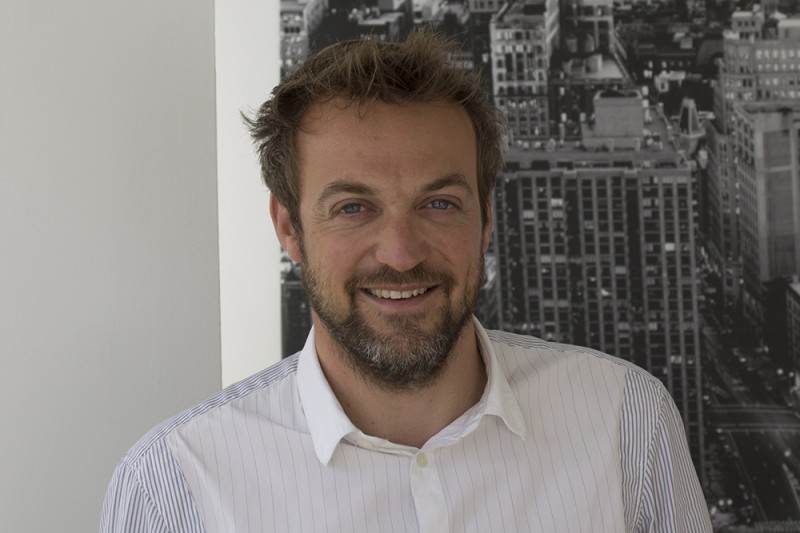 Although he had a job in the fast lane for fourteen years, Patrick always knew he wanted to ‘do good’. In the past, ‘doing good’ was something entrepreneurs postponed until their retirement. After all, that’s when you have the time, the money and the experience. However, nowadays more and more entrepreneurs have discovered that doing good and doing business can go together. There’s a special breed of them, known as ‘social entrepreneurs’. Patrick is one of them, which is why he and two colleagues decided to set up Funds for Goods, which invests in shares, and gives a fair share of the profit to good causes.

‘We support two causes,’ Patrick explains as he sits down. ‘Micro-financing in Belgium, and the Red Cross.’ The micro-financing project is aimed at helping small entrepreneurs in Belgium. ‘A nursery, a restaurant, a small shop. Companies that are created by the people themselves, for themselves. We focus on the less privileged, people who don’t have a lot of money, and only a really basic network. We provide them with a loan of equity, interest free and repayable only after 2 years, so that they can start a business.’

‘You help them grow, so they grow and hire people.’

‘Exactly, it boosts the economy.’

‘And the Red Cross?’

‘With one of my Funds For Good partners, I gave French lessons and educational support to refugees in a Red Cross center near our office. It was then pretty natural for us to start supporting the work of this NGO. We focused on projects in Africa that give access to education and entrepreneurship.’

Although the brightly colored website of Funds for Goods may suggest otherwise, Patrick’s office looks like your average grey brick office block, with a staff of ordinary white collar workers glued to their computers. Noting particularly socially responsible about that. It’s when Patrick starts talking about his business, that I understand how dedicated he is to this business. His hair looks like he constantly brushes through it with his hands: a bit messy, or nonchalant, if you prefer. His bushy eyebrows give him a rather severe look, but his blue eyes are friendly. It’s as if his appearance is a perfect reflection of his work: swift and concise, but still socially engaged.

‘What is it like to be an entrepreneur in Belgium?’

Patrick takes a sip of his coffee, while he mulls over his answer. ‘Hmm… It’s not the worst, but it’s not the best. The entrepreneurial culture here is not so good, especially when you compare it to other countries. First of all, in Belgium you lose your right to unemployment benefits when you decide to start your own business. In France, for instance, there are initiatives that help you to at least survive for the initial period. But the main problem is the culture. Here, we don’t support people who want to be successful for themselves, it’s not as socially accepted as it is in England or the U.S. If you work for a big company, and you have a good job, that’s cool. But if you want to launch your own company, they will say “why did you quit your job?”.’

‘In the US it’s almost as if you can’t be a good entrepreneur until you’ve experienced bankruptcy, but not here?’

‘Exactly. In Belgium, it’s not OK to go bankrupt. I don’t see it that way. In my opinion, as long as you fight for your project and for what it’s worth, it’s OK. As long as you learn something.’

‘Definitely. It’s a European problem, I believe. We somehow cannot deal with risking something. If you don’t succeed with your own company, you’re a loser. That’s not OK.’ Patrick shakes his head in disapproval.

‘What would you do to change this?’

‘I believe it begins with education. We should give students more tools and information early on, in order to encourage them to strive to become entrepreneurs. I regularly go to universities to speak as a social entrepreneur, just to give the students a taste of the business. We need more living examples for the next generation.’

On Patrick’s desk, there are framed pictures of his wife and kids. Patrick’s wife is Flemish, while he’s from the south of Belgium. ‘Yes, we’re a “Belgian” couple’, Patrick smiles, air-quoting the word Belgian.

‘Is it normal, friendships or relationships between the Flemish and the Walloons?’

‘Right now? No, definitely not. We don’t watch the same TV channels; we don’t go to the same cafes. Speaking French and watching French TV channels makes us Walloons closer to the French. People from Flanders are closer to the Dutch. It hasn’t always been like this, though. Years ago, I regularly went to Rotterdam for work. Back then, Flemish and Walloon employees worked together. It was fine. Ten years later I came back to Belgium after living in Paris, and apparently, things had changed.’

‘What happened?’ ‘It’s a long-term process, probably instigated by the media and politics. ’

‘Yes. It’s a pity.’ Patrick sinks back into his chair.

‘Do you think Belgium will split up sometime soon?’

‘It’s a difficult question. Before, I would’ve said ‘never’, but now I’m not so sure. It is inevitable I guess, but it’s very difficult. Some politicians favour moving towards a confederation, which is a model that exists nowhere in Europe – for good reason, it has never worked.’

‘The Flemish say they want to split .’

‘Most of them don’t want to split! Again: some politicians want to.’ Patrick bounces up from his chair. ‘People have this stereotypical image that French-speaking Belgians never work and that all the money is situated in the North.’

‘It is, but that doesn’t mean that the South is not working, even if there are clearly reforms to be made there. It’s an exaggeration. Besides, it would be very difficult to actually split the country. We’ve been working towards becoming a federation for the last twenty years, but in fact there’s less and less federal government – all the power is moving towards the regions. This way you duplicate every measure that should’ve been implemented on a federal level. It’s not efficient.’

‘I think so, yeah. I believe we have to turn to Europe more. The problem is that Europe has been built with too many countries. Right now, we have too many citizens to please, and too many countries around the table. This makes it harder to create a united Europe, a fiscal, a political Europe.’

‘What is the solution, then?’

‘Maybe we should create that in a core of five or six countries. The problem is this shitty crisis. Where there’s a crisis, nationalism arises, which makes it a very difficult moment to unify. So there’s a lot to do for the new generation, my bet is on the young people. Again, it’s a mentality thing.’

‘It’s not just Brussels. The politicians have to work on their communication, explaining what they do and consulting the citizens more. The problem is that their thinking is too short term, too focused on re-election in two to five years. That’s a problem for society in general, we never consider future generations. If we focus too much on the short term, it won’t work.’

‘What’s lacking is a plan.’

‘What’s lacking is public communication. I talk to a lot of rich Europeans that vote for pro-European parties, but that’s because the communication is only directed at rich and highly educated Europeans. I mean, when I look at the news coverage on the elections, I’m like: “Fuck, it doesn’t even interest me.” In France on the other hand, everybody follows the debates.’

‘Yeah, but that’s because in France, they made it about hand-to-hand combat between Hollande and Sarkozy. It was like a boxing match, that’s what people want to see.’

‘Exactly. I don’t know if that’s a good thing, but that’s what most people want.’ Patrick looks at me and shrugs his shoulders. It’s all so obvious.