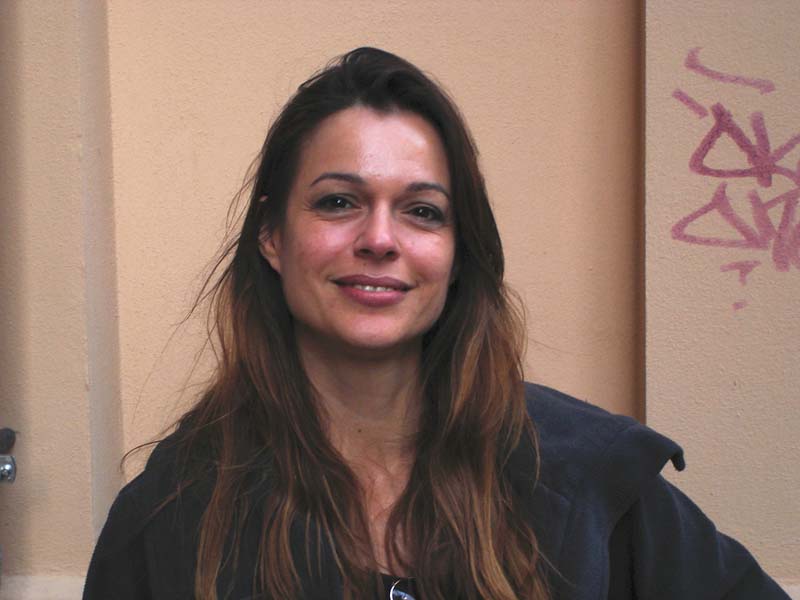 The first time I met her was six months ago. It was my first trip to Berlin and I had asked friends if they knew people I could meet. A friend of a friend had arranged for me to contact Suzan. An actress, he had said, that’s all I knew.

On the day of my arrival I called her. ‘Bad timing,’ she said, ‘I can’t meet you tonight, because I’m going to the premiere of a film I was in.’

‘Great timing,’ I answered, ‘You surely need an Amsterdam-based journalist to accompany you!’

‘Okay. But it’s just a small film, nothing special and I’m playing a tiny part. Meet me at seven at the Ritz.’

At eight thirty she showed up, looking glamorous and pretty, and half an hour later we walked to the Sony Centre at Potzdammer Platz, the cinema where the film ‘Man tut was Mann kann’ would be shown for the first time. A small premiere, she had said, and I had pictured a viewing with the director, the cast and some 30 guests, friends and family.

Then we turned a corner and I could see a very long red carpet leading to the theatre’s main entrance. On either side of the carpet, people shouted from behind the crush barriers (fans on the right, paparazzi on the left): ‘Suzan, Suzan, pose for us’, or ‘give us an autograph’ or ‘who is that man at your side?’ The next week I appeared in several gossip magazines as the mysterious new man in Suzan Anbeh’s life. The film was good by the way, a German comedy, not a huge genre.

We meet again on a terrace in front of Pasternak, a fashionable Russian restaurant in the heart of upscale Prenzlauer Berg. She has just returned from Stuttgart. ‘I’m playing in a crime series now, where I’m the murderer. I’m happy about my part. It’s much more interesting to do a character who is looking into a black hole, who has secrets and mystery. One who has dead bodies in the closet, literally. To be honest, it’s more difficult to play a character who’s normal. In my next piece I’m a killer again,’ she laughs.

Suzan started acting when she was 17, when she left Germany to live in Paris. ‘I didn’t want to study, I wanted to do something exciting. Went there, slept on many couches, then found a school, learnt theatre French, had jobs as a model and went to all the parties.’

‘Did you get any job offers?’ I ask.
‘No, those old farts, they just said “tu es jolie, you want to work for me?” but nothing came of it. But I had a great time. And finally I managed to get better and better roles: Shakespeare, Racine, Molière, which was kind of special, because they didn’t like Germans that much… Even though I’m half Iranian,’ she says.

From there she built an impressive career, playing in many films and TV productions, French, German and also American. She played a leading role in French Kiss, with Meg Ryan, Kevin Kline and Timothy Hutton.

‘But still, it’s hard work being an actor. We always have trouble finding new roles, that goes with the job. It’s talent and hard work, but also luck. Only a few are booked all the time. I’m a busy actress, but also a single mother. That means that I have to pick my roles carefully, not only the quality pieces that are interesting and good for my career, but I’ve got to make money for my son. I have to compromise and that’s fine.’

She lights another Gauloise Blue, still under the sway of the French.

‘In a year I have only 55 days of shooting, that’s what I’m paid for. But the other days I have to prepare my parts or do auditions. Or show up at all kinds of events in expensive dresses to be seen and noticed. It’s a full time job. It may sound like fun, but I’d rather stay at home with my son and read a good book than walk down another red carpet. It takes me three hours to get ready, to do my hair, pfff.’

I am aware of this, having waited for her over an hour at the Ritz.

‘And the thing is, that government treats us actors like normal people, normal workers, which we’re not. We are not allowed to be registered as unemployed, unless you are shooting for more than 180 days a year, which is impossible, unless you’re in a soap series. And yet we pay money to the government for when we’re unemployed.’

‘Is that different in other countries?’
‘Yes,’ she says furiously, but she might be acting. ‘In France there is much more respect for the industry, which is what it is, an industry. Here if you’re out of a job and you register you have to go the unemployment agency where you will be offered a cleaning job.’

‘You could go on strike!’
‘No, that’s the other thing; there is no solidarity amongst us.’

‘You could change that, you could stand up and organise it.’
‘I should. I could get naked and write something on my body and throw myself at Angela Merkel.’

‘That’s a promising start,’ I say.
The waiter brings Suzan another drink. She lifts her Ray-Bans for a second and smiles.

‘Is being well-known an advantage in Germany? Do you get a better table at restaurants? Do policemen tell you to drive on instead of giving you a fine?’ I ask.
‘Unfortunately not. Maybe, if I would have that attitude, but no… Sometimes people ask for an autograph. Sometimes people stare at me, thinking where do I know her from, but they don’t make the connection. They have seen me in their living room and I can see they’re irritated and it makes me laugh. I don’t have people running after me. I’ve met stars and it’s like they’re in prison. I was shocked. They’re paid well, but they’re basically in prison. In Germany there’s not a culture of stardom.’

‘What do you think of your country?’
‘Germany has a strong economy, they’re good at that, but there is a lack of sensitivity regarding their own culture, and they have been shutting down theatres, and cutting back on funding for outstanding cultural organisations for example.’

‘What are you?’
‘I feel European. I’m happy it is becoming one big union. It’s a brave step, a difficult one, but a good one. Very good that neighbours are not a threat anymore, that there is peace. I have good hope that we will form one country in the near future. And the good thing about the crisis is that countries are forced to connect more. The disadvantage is that all countries are going to look alike, a Zara and H&M in every city. But I think that traditions will come back, as a counter reaction, in a nice way.’

We have to finish, Suzan’s son is fed up with the playground across the street, and he is making it clear he wants his mother’s attention.