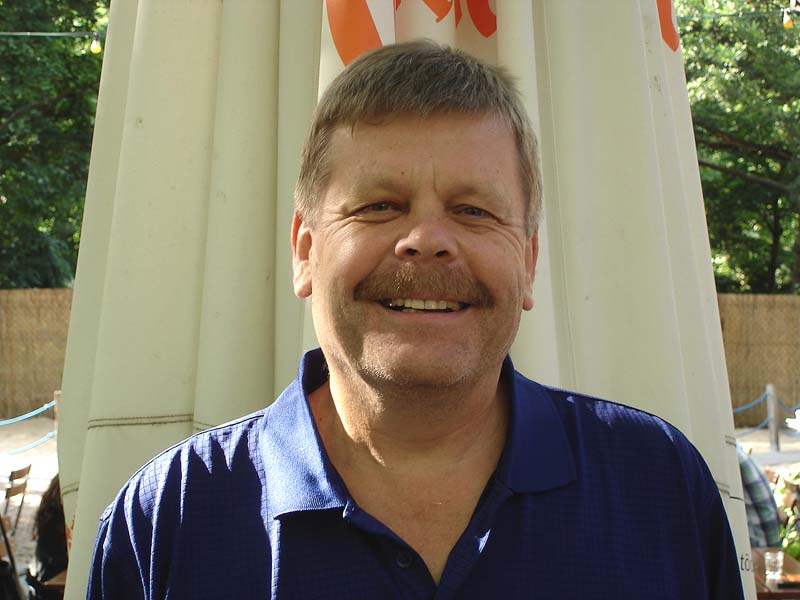 He’s got a black eye. ‘It was an elbow.’ Matthias is a basketball player, who played for the German national team for many years; now he’s in the over-55 squad. ‘The game has become more dangerous: we don’t have as much control over our bodies as once did, but we tend to forget that when we’re playing…’ Matthias has also been a dentist for the past 22 years. ‘Me and my partner have five chairs, and we employ fifteen people. It’s a team, just like basketball.’ He only became a dentist at 37. ‘Because I spent all my time playing basketball, my grades in high school were so low that I missed the selection, and wasn’t let in until the tenth draw..’

We’re sitting in a Biergarten. Matthias is a large man, drinking a large beer.

‘You found it worth the long wait, so apparently it must have been very important to you,’ I say.
‘Well, not really. I had my job, after years of being a dental technician I had become a real estate agent, but my main interest in life was basketball. But yes, I do remember the moment I opened the envelope from the university. It had the same colour as always, so I expected the same news as in all the previous years, but this time it finally had good news.

I studied with boys and girls much younger than me. I could help them: I had a lot of experience from being a technician and in exchange they provided me with notes from classes I couldn’t attend because of basketball.’

‘As a child, what did you want to do when you grew up?’
‘I don’t know. To escape home, basically. Basketball gave me that possibility.’

Matthias prefers talking basketball to dentistry. How he missed the Olympics, because of the boycott of the Moscow 1980 games, but that he had played against Magic Johnson. ‘I blocked him – but he was 17 at the time.  Well, the older we get, the better we are, as the saying goes. My wife says it’s a pity I didn’t do it the other way around.  A career as a dentist  in the seventies and basketball now. I was an amateur then and it cost me money but now these guys earn serious money in Germany, while dentists are earning less now, the good days are gone.’

Matthias takes a big gulp from his beer.

‘For many reasons. Insurance companies don’t compensate everything, while patients have become more demanding. They don’t want amalgam in their mouths, no mercury of course. In the old days expensive operations like implants didn’t exist. I spend a lot of my time explaining to patients why I can’t do everything they expect. And many people can’t afford it, that’s why you see more and more people with bad teeth nowadays.’

I immediately shut my mouth.

‘You see that apparently?’
‘It’s the first thing I notice.’

‘Are mine okay?’
‘Yes, but you drink too much tea. That tooth is a bit yellow.’

His phone rings, the manager of Alba Berlin, his basketball club. He has a toothache and wants to be helped immediately. But no, Matthias tells him to take some painkillers and come on Monday morning. It’s Friday afternoon now.

‘I don’t like stress,’ he says after he’s hung up and ordered some chips to go with the beer.

‘What is the social position of a dentist?’ I ask.
‘It’s good. They’re dressed in white clothes, they help, they make good money. On the other hand: they cause you pain. That’s why I make jokes while my patients are in the chair.’

‘My dentist does the same,’ I say. ‘He tells jokes that really aren’t very funny. But the worst is that he keeps asking me questions when he should know I’m not able to answer them. Why is that?’
‘That’s a psychological trick,’ Matthias says. ‘You’re puzzled: “why is this asshole asking me things when I can’t talk because his big hands are in my mouth?” And that’s when I know I can  do what I need to do, quickly. You know I love to pull teeth, I think it’s fun.’

Now I’m sure: dentists have a weird sense of humour. ‘What do you think of Germany?’

‘I like it. I like the mountains, the sea. It’s structured. You can trust people here, no negotiations. I’m fond of the US, of Switzerland, but I’m always glad to be back home. And my country is well governed. I think, looking at Germany’s economic power in Europe, that we must be doing something right. You know what’s also great about Germany? That you can study for free. The only thing I had to pay was 30 Marks to get my university ID. Books I borrowed from the library. It still is free and that’s remarkable. Especially for a degree in dentistry, which costs at least 100,000 Euros.’

‘What does the government get from you in return?’
‘That I pay a lot of taxes.’

‘And what about Europe?’
‘I’m not a fan. Europe doesn’t have to be so big. It’s become too difficult to control it. Take Greece. They were able to present us false papers in order to slip into the union, only to inform us a couple of years later “hey, we’re bankrupt, help us.” And I didn’t need the euro either. I was perfectly happy with the mark, the lira and the guilder. Sometimes I have the feeling that these guys in Brussels are making laws for the sake of it. “Why not say that from now on bananas should have a different shape.” I see it in my profession: for every material I use I have to fill out a different form, all this paperwork, unbelievable. I guess we don’t send the best and brightest to Brussels.’

‘Where are things heading?’
‘Well I hope we survive the crisis. We need 3000 professors, we need teachers, but we don’t have enough money to educate and pay them. But we do have money for Cyprus, Greece and Italy. That’s crooked, don’t you think?’