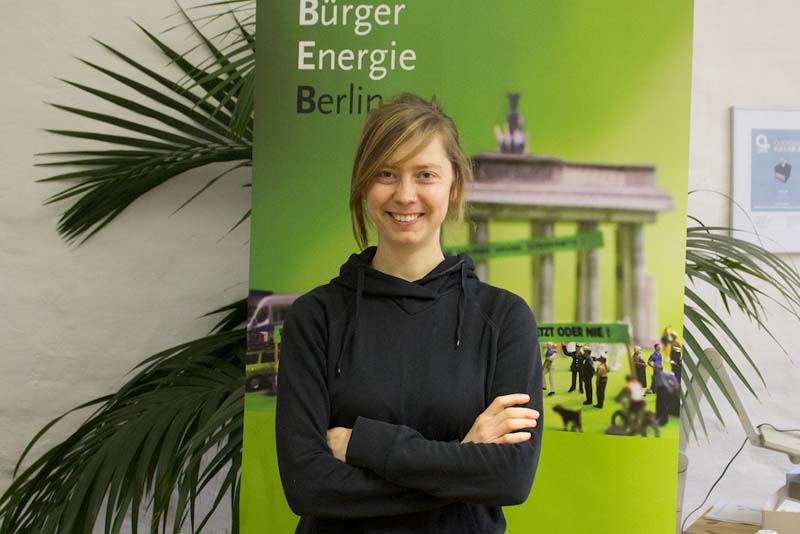 It’s unwise to go tilting at windmills, so they say. But what about fighting for them? Luise does both. She is the leader of BürgerEnergie Berlin, a group that wants to buy the city’s energy grid, now owned by the Swedish conglomerate Vattenfall, which provides the city with bad energy: coal, or worse, nuclear energy. The cost? About one billion euros.

‘Usually, when I tell people that I want to do this, they think I’m crazy. That’s the first struggle. But it’s not: there’s a realistic chance that we may actually succeed in buying it.’

‘But how will you manage to raise the money?’

‘We only need a smaller amount, about 100 or 200 million, that’s equity money. We want to buy the grid in cooperation with the city, so they will have to provide some money too.’

Luise Neumann-Cosel, only 27, is Germany’s new green face. Determined to fight for clean energy, she passionately addresses large demonstrating crowds and eloquently defends her cause on German television. And she is always courteous; even though she has chosen to drop the von in front of her last name, her impeccable manners reflect her aristocratic background.

‘What made you start BürgerEnergie?’

‘Several points. First it’s not a good idea to leave something as important as the energy supply to a private company, especially when they are producing energy from coal power plants and nuclear power plants. And the kick-off was that buying the grid is actually a possibility as the contract is running out and the politicians have to pick a new grid owner.’

A green face and a clean face: Luise, who is wearing jeans, a black sweater and no make-up, is not the glamorous type. She is someone who takes the time to weigh each question and chooses her words carefully.

‘We want to create a new form of energy democracy where people have a choice to participate financially.  Democratise the energy market. It’s important that people stand up against the big companies, who don’t want to share the money they are making.’

Luise works from the office of a sympathiser, so her desk is squeezed in between advertisements  for environmentally friendly toothpaste and banners promoting BürgerEnergie Berlin.

‘What does Europe mean to you?’

‘I feel European. And I realise how European I am when I travel, for example when I spent time in Central America, where I did my thesis. We were a large group of young students and scientists, from all over the world and it was then I noticed how similar people from Europe think, act and work. Ja, I started to feel European the moment I left Europe.’

It’s difficult, it’s also based on feeling. But there are common values. I remember a talk we had during a lunch break about homosexuality. I can tell you that we Europeans shared a much more liberal view. And I remember one American, who had spent one year of his studies in France, and who formed more or less a bridge between us, very funny.’

‘He was Europeanised! The EU is becoming more and more important, what do you think of that?’

‘It’s kind of weird for me,’ Luise says, ‘because for me it feels as if it has always been there. I’m not that old, you see. For me it’s normal and logical that we depend economically and for our peace on the EU. It’s strange to question it. And I think it is important that the EU grows and remains open to new countries. It shouldn’t be a closed job. All these highly guarded borders in the south of Europe are quite terrifying if you ask me.’

‘How should it be done ? No borders?’

‘Well, that should be the aim. It’s a very complicated problem and lots of people are racking their brains for an answer.  The root of the problem is that we are rich and many people in the south are living in poverty. We can’t solve that problem by building high walls and having strict border controls. We should help these people where we can and now we’re doing the exact opposite: with the way we produce energy and food.

‘Simple example: take palm oil. Because we want it, entire rain forests are being chopped down.’

‘The EU as an institute, does it work well?’

‘I guess there is a lot of imperfection. A deficit of democracy, certainly. To feel European doesn’t necessarily mean that I have the possibility to participate and influence decisions taken in Brussels. Of course I can vote the representative of my choice into the European parliament, but does it really help? The Brussels parliament isn’t very strong, lobbyists play a large role, just as nations and that’s not as democratic as it should be.’

‘Is there a European link with your work?’

‘Yes, Berlin is a big European city and if we’re successful we could radiate that to other cities. And living in the EU makes it easier to export ideas to other countries: we’re more closely connected now. Also energy politics: is it smart to interconnect the European networks and grids? Is it smarter to produce energy where it’s needed or is it wiser to transport it? I couldn’t answer that question, but we’ll see, the future will tell!’