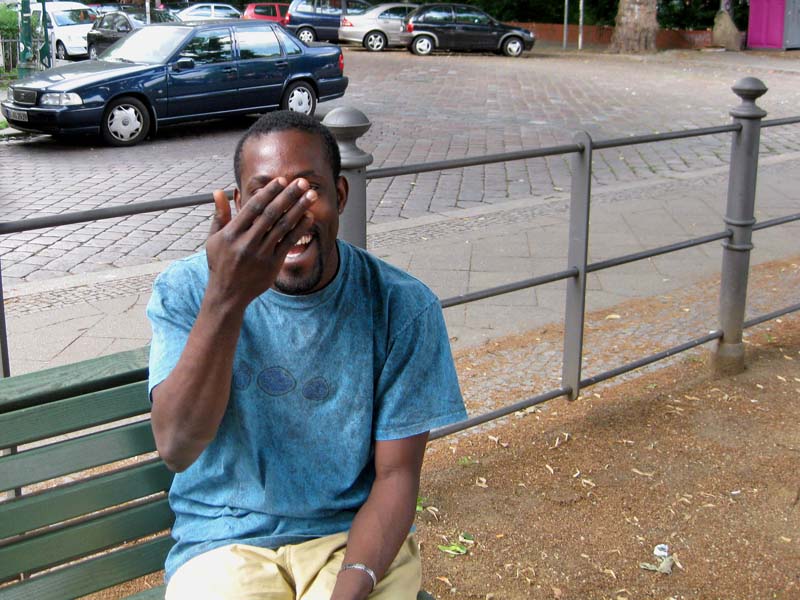 The city has always been beautiful, but in the last few decades since the fall of the wall a lot of money has been spent on renovation and now Berlin is in great shape. Pretty, rich, green and clean. And in the middle of this urban paradise, at Oranienplatz, a square in Kreuzberg, there is a camp. Lampedusa Village Berlin they call it. Approximately   a hundred refugees live here in about ten tents. Joe, a 28-year old Nigerian is one of them.‘I need to work. To be like a human being.  We’re like slaves now. Like goats.’

We’re sitting on a park bench behind his tent. Around us children are running and playing with balloons. Their mothers are keeping a close eye on them from one of the picnic tables. They are asylum seekers too, but they do not live in the camp: a tour bus has just dropped them off for an afternoon of playing in Lampedusa Village, which is apparently an improvement on where they live.

‘I moved from Lagos to rescue my life. I had problems there, they wanted to kill my family. So I went to Libya. Boss, I’m telling you, I had a good life there, sunshine, good car, good house. Then the Europeans started bombing and I had to go to Lampedusa.’

Since the early 2000s thousands of people have tried to enter Europe via this little Italian island, which is only 100 kilometres from Africa.

‘There the Italians gave me 500 euro and told me to leave. And now I’m here. I want to work. They gave me documents to work. But I can’t. Why? Why not give us the right documents? It’s bullshit.’

‘What were you doing in Libya?’ I ask.

‘In beauty?’ Joe is an average looking Nigerian guy who doesn’t look much like a hairdresser or stylist.

‘Ah, you were in building.’ I’m not used to his Nigerian accent.

‘I’m telling you, boss, I didn’t want to come to Europe. It is a nightmare, not a dream. And I can’t go back to Libya. Gaddafi was a good man. He liked Africans. Africans should unite. One love. Africa unite,’ he starts to sing. ‘If we would unite today, the US and Europe would fall. Because they are using the money, big money from African leaders to finance their banks. They shouldn’t accept that money.’

‘You like football?’ I ask when he subtly kicks back a ball to one of the kids.

‘Yes. I was professional.’

I’m not sure if I believe him, but I’m pretty sure I might try the same lie so many kilometres from home. ‘I need a club. I play here with the refugee team. Last month I won this.’ He shows me his WIFI-watch. ‘I was best player of the day, out of ten teams. But I need new boots.’

‘What do you do here all day?’

‘Sleep. Look for people who can help me. Sleep. Wait. Listen boss, you people need to help us. We are human beings, we have five fingers, just like you. We have a nose, you have a nose.’

For a moment Joe smiles. But then: ‘All blacks, we’re slaves. Only God can help us change this.  He can send somebody to me to change my life. Like you. To help me. Because I need help. I want people to adopt me.’

Bob Marley sings another song, two West Africans play a game of checkers using rocks as pieces, the children jump in the inflatable castle and Joe picks up his phone, a friend is calling.