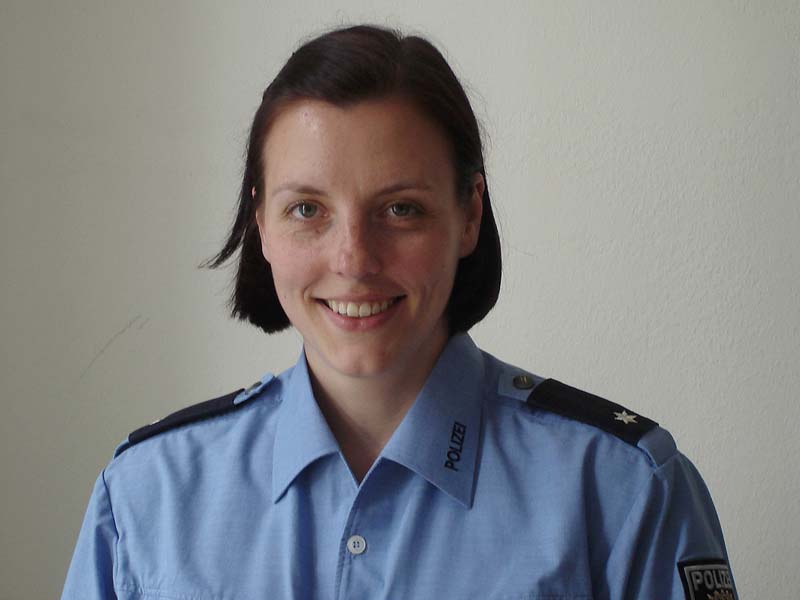 The slightly gloomy office of the Polizeiprasidenten is a massive stone structure , built in the early years of the last century. The entrance is small, to make you feel even more humble, and you are not allowed to enter the police station until the security-officer has checked your papers.  Frau Jabukowski meets me and guides me to her office. The long walk through empty corridors along closed doors reminds me of my school days. I am the pupil expelled from the classroom, she is the teacher taking me to the principal.

But Frau Jabukowski isn’t unfriendly. It’s just the combination of Germany + police that makes this visit more formal than I’m used to.

‘How long have you been a policewoman?’ Naturally, I use the formal  ‘sie’ instead of ‘du’.

‘Eighteen years. I’m thirty-four now, I started at the police school when I was sixteen. No, not the Academy, I did four months of extra training a couple of years ago to reach that level. You see, I’m now wearing three silver stars instead of blue ones, that’s because of the promotion.’

‘Are they important to you, the stars and stripes?’

‘No, she says, ‘but once you’ve done Police Academy you’re able to move into  the higher ranks.’

‘When will you be made chief?’

‘What’s the status of a police-officer in Deutschland?’

‘In the middle, I guess. We are important, we’re the helpers, the law, the ones you call when something’s wrong. Our status… closer to Frau Merkel than to a criminal. Between the professor and the taxi driver.’

‘What did your family say when you joined the police?’

‘They approved. I’m the first. My partner is a policeman too, by the way. But some of my friends were not so enthusiastic, they had had bad experiences with the police, had been in trouble. Not me. I remember that as a child I would quickly jump off my bike if I happened to be cycling on the wrong side and I saw the cops coming, quite guiltily.’

‘Why did you choose to be a policewoman?’

‘Because it’s a job that’s got a future, but most importantly because I wanted to make the world a better place. Now I know it can’t be done, I accept that, that’s reality. I’m happy to make a small difference, like when I worked on the street. Even though that was difficult sometimes, and troublesome young people were especially hard to reach. I just couldn’t get it into their heads that it would be so much wiser to do well at school. They didn’t believe that we knew how things worked. They just want to have fun.’

‘Is it fun to be a policeperson?’

‘Sometimes it is, yes. It’s never the same. I like working with different people and various nationalities. It’s always interesting. I’m now a spokesperson, but until last year I worked for Notruf, the emergency line. That was hectic, it was quite a challenge to get the right information out of stressed people.’

‘What would you have become if not a policewoman?’

She thinks for a while. ‘A lawyer, I guess. Or a social worker.’

Outside the window I hear police sirens. I look out of the window, Frau Jabukowski doesn’t.

‘Do you watch krimi’s?’ German police shows like Derrick and Tatort were always very popular in the Netherlands.

‘Yes, I think they’re great. Very true and realistic. They work closely with the police, did you know that we help them?’

She closes the window, but the sirens are still too loud for us to have a normal conversation. Finally Frau Jabukowski’s noisy colleagues leave.

‘What do you think of your country?’

‘I feel very good in Germany. It is a safe country. I’m a true Berliner, west-side.’

‘Mmm, I’d go to Sweden, because of my mother’s family. Or France, because of the beautiful language. But you never know until you’ve really been there.’

‘Europe is good. But where it’s going I don’t know. I love free travelling.

‘Can I ask you something?’ Frau Jabukowski asks at the end of the interview. ‘You’re interviewing policemen throughout Europe, right?’

‘Can you tell me then if policemen in other countries also have to pay their own insurance?’

I tell her I don’t know, but promise to ask her colleagues in Paris, Athens and Dublin.