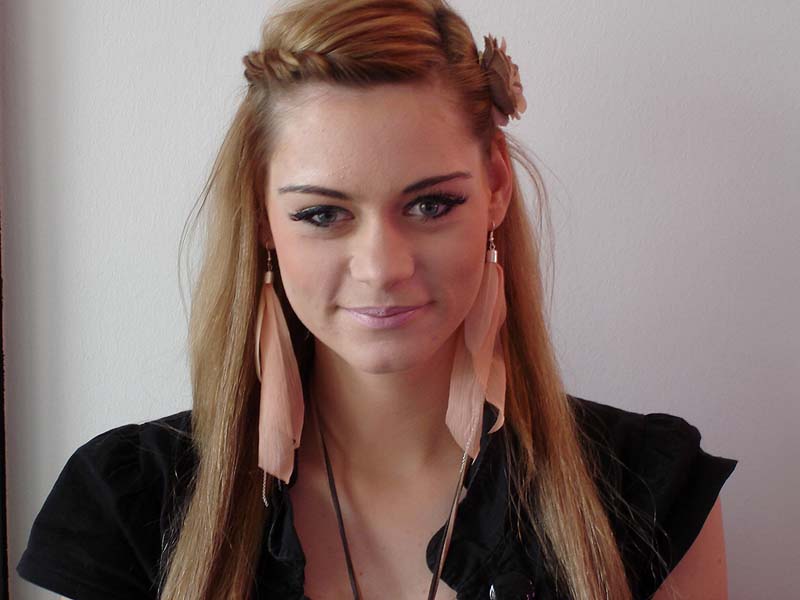 ‘How many millimetres do you want?’ She’s holding the clippers.

‘Then I do it without overhang,’ she says and starts shaving. Since I’m as good as bald, it’s been a while since I was in a hairdresser’s chair.

Angelique, 21, works in Salon Tina, named after her mother.

‘Will it be Salon Angelique soon?’
‘I hope so. In about five years, when I’ve become a Master.’

‘What more do you have to learn?’
Tina is busy with another client, two chairs away. She’s doing a bad job of trying not to listen in. ‘Pff, all these administrative things. Legal stuff,’ she says while tossing my head to find little islands of hair her clippers have missed.

‘What did you want to become when you were a child?’
‘A hairdresser.’ No hesitation.

‘What do you like best?’
‘Colouring. It’s difficult, but I like it. You never can be sure how the colour will turn out, it takes quite a bit of calculating and estimating.’

On the sound system, Madonna sings like a prayer.

‘Who cuts your father’s hair? You or your mother?’
‘Me, but sometimes my sister. She’s a hairdresser too.’

Time to wash my scalp, no questions now.

‘Where in Europe have you been?’
‘Spain, Italy, Greece.’

‘Where it’s sunny.’
‘Genau,’ she laughs, while towel drying my head.

‘Where would you want to live if had to leave Germany?’

She thinks for a while. ‘Mallorca. The weather is nice, so are the people.’

‘Do you like living in Germany?’
‘Yes. It’s not boring. Though I wouldn’t want to live in Munich:  people there are arrogant. But I love Berlin. And here people don’t frown at you when you dress up nicely.’

Angelique has long black eyelashes and a rose in her hair.

Now Michael Jackson wants to be starting something.

‘Is your government good?’
‘No. They do nothing for me. Or for young people in general. We’re badly paid. They could lower taxes. I don’t understand why they spend  money on  Greece, but not on us.’

‘That will change once you own the salon, right?’
‘Maybe,’ Angelique says, examining her pink nails.

‘What’s the status of a hairdresser?’
‘Bad. Low. I don’t really mind, but what bothers me is that people think it’s an easy job. It’s not. You’ve got to have basic knowledge of chemistry, it’s technical.’

‘What do your friends do?’
‘They’re hairdressers, or they work in bars, offices, or hospitals.

‘Do you have friends from other countries?’
‘Yes, a lot. From Spain, Africa, Poland. I like multikulti, it’s nice to meet other people. I think that we’re all human beings, all the same, wherever you’re from.

‘And what do you think of Europe?’
‘I’m a Berliner. Period. I think it’s good to help other people, but you should help your own people first.’