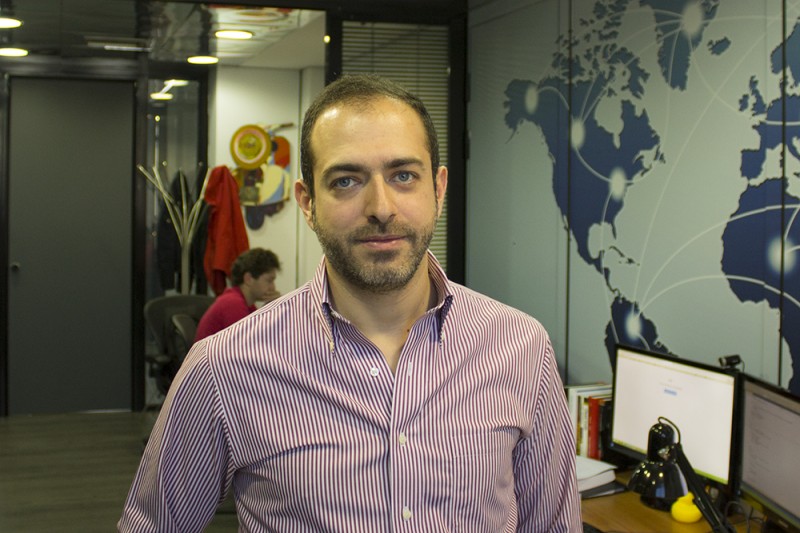 Yiannis’ office is easy to miss as you stroll through the suburbs of Athens. To my surprise – or disappointment, maybe – his tech company isn’t housed in a futuristic spaceship, but in a rather seventies-chic style building: the marble and gold are in contrast with the two rooms Yiannis uses. Four clever-looking guys are surrounded by computer screens – two each! – and exactly the kind of high-tech stuff I would expect to find in a company run by young, savvy entrepreneurs. Sitting down, I can’t help but feel relieved that at least some of the stereotypes remain intact.

Yiannis is anything but a rookie in the world of entrepreneurship; he co-owns a bar and a theatre production company, among other things. ‘I started five small projects with my business partner, investing and partnering talented people. They run the companies, I give directions,’ he smiles, visibly content with this division of labour. ‘The theatre company is part-owned and run by a well-known director, the bar by a skilled bartender, and I bring in what I’m good at: the business side.’ Covve, a concept started in 2012, is the first business he runs by himself, as a CEO. ‘My whole heart is in this one.’

Yiannis’ vision is clear: creating a digital address book that is not just organized, but rich in information and perspective. In a world of ever expanding networks created by social media, Yiannis missed the depth of personal connections, essential for doing business. ‘Let’s say I’m based in Europe and I think my product could do well abroad; which door should I knock on first? We will take your address book of, let’s say, 2,000 contacts. We cleanse it, identifying the location, industry and other characteristics of your contacts, visualize and privately share it. While always maintaining a level of privacy, of course.’ Yiannis takes a sip of his coffee, giving me the time to overthink whether this idea is simply brilliant or just something someone should have invented long ago. Probably both.

Yiannis seems like a relaxed guy; a typical entrepreneur with a five o-clock shadow on his face, the top few buttons of his shirt undone – no tie, of course. His piercing ice blue eyes flash as he talks about politics and economy. And he is certainly not shy about voicing his opinions on these subjects.

‘The entrepreneurial culture is improving a lot. There’s an ecosystem: incubators, common working spaces, and seminars. The big problem is money: there are only three or four serious venture capital firms active in Greece, which are mostly funded through JEREMIE, an EU initiative aimed at supporting micro to medium-sized enterprises around Europe.

There is a drive for entrepreneurship in Greece, there is a drive for export. To bring in money from things that actually belong in Greece.’ Olive oil, for instance. ‘For Greeks it used to be a commodity: we sold it to the Italians who mixed it, bottled and branded it. Now we are branding it ourselves, our lovely olive oil,’ Yiannis says, visibly proud. ‘So it’s happening. There’s more buzz than there are fundamentals in this economy, but it’s happening. And I’m all for it.’

‘So Greece as a company is not doing very well. What would you do if you of you were the CEO of Greece?’

‘ I would definitely want to cut costs, because the costs are ridiculous,’ Yiannis replies, without taking time to weigh his words. ‘And then, to drive growth you have to create a stable structure to promote investment. Furthermore the system of taxation is failing; it has changed and it keeps changing. . Yes, stability, that is what Greece lacks most at the moment, and that makes it difficult for entrepreneurs to step in: they need to know what to expect.’

‘Earlier you told me that Greek engineers are good. In general, is the work force well enough educated or would you invest in making it better?

For a moment, Yiannis pauses, sinking further back in his leather chair. ‘There’s a disconnect between education and work force. In Greece, this is very evident. The way students have been trained is more on a theoretical level. That’s good if you want to churn out PhDs, and research should absolutely not die out, but it should be closer to business. By that I mean internships, bringing business people in to teach at the universities, and to connect business to the educational world, so that what you produce can be more easily digested by businesses after graduation.’

Moving back to Greece from London in 2008, Yiannis experienced a totally different way of living, which had become unfamiliar to him. ‘In the south of Athens, during the day all the cafes were full of people drinking coffee for hours. I always wanted to go in and take a survey, ask them what they were doing, if maybe it was their day off.’ He looks at me and a boyish grin appears on his face as he imagines such a scenario. ‘So I could understand why the rest of Europe calls us lazy. But seriously’, he continues while he straightens his face, ‘I don’t know if it’s the majority, but there is a very highly-skilled, driven work force in Greece. I’ll tell you this much though: in the last two years, four friends of ours have moved abroad. And all four were very successful at what they did.’

‘So there’s a brain drain?’

‘What would you expect?’ Yiannis says, moving towards the edge of his seat. ‘I mean, off to Sydney, to London; they moved out! The worst stay, they don’t have the possibility to go. The first one to leave is the one who is going to get a job somewhere else, the best of them.’ Just like Yiannis did, actually.

‘So do you feel European? Or Greek, or Cypriot?’

‘All of the above. Although… I’d like to feel European, but when I talk to someone German I don’t feel that instant connection of us being Europeans versus the global society.’

‘Maybe you would have had the same connection with a Brazilian working for McKinsey; that’s a better match for you than a Bulgarian farmer?’

‘Yes, exactly. So maybe I have more connection with someone from Argentina who has a southern mentality, than with someone from Norway for example. But you’re right, the background counts. When I lived in London, I had friends from all over. Like you said, the work connected us.’

‘You say you’d like to feel European. Why?’
‘I would like to see country barriers break down even more, so that we can collaborate more on the business side. If the EU functions as a whole, we can become more competitive. I can still feel some cultural differences, but I see that slowly fading as there’s more and more interaction. I hope he differences continue to fade but on the other hand you don’t want to kill the national identity.’