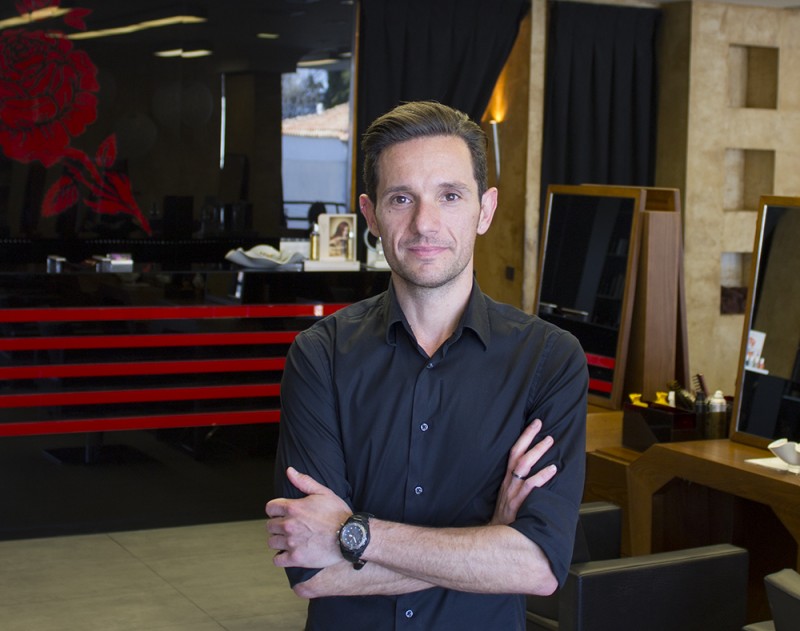 Cristodoulou, Nikos’s hair salon, is a real family enterprise: mother and her three sons do the cutting and styling, while dad is in charge of the bookkeeping. Nikos, the middle son, is 37. He sees having a family business as an advantage over the numerous other salons in the neighbourhood. ‘You are more involved,’ he says. ‘With regular clients, you end up knowing exactly how they drink their coffee, what their preferences are.’

He’s thin, fit. It’s because of the running, he tells me later: he runs marathons. A Greek thing of course, we would come to that later too.

‘How is your business at the moment?’

‘At this moment, it is not a good time to be a hairdresser. A lot of salons had to fire people because of the crisis. The people who were fired start working from home and take some of their clients with them. They have a huge advantage because of their practice in the salon, and they don’t have the costs; they do not pay taxes.’

‘No taxes? And you, do you pay all your taxes?’

‘I pay taxes,’ Nikos says pokerfaced. ‘But it’s all black money. Difficult for me to compete with these kinds of guys.’

Nikos’ salon is situated in Kifisia, Athens’ poshest area. Houses are nice but expensive and so is the rent in the clean, shiny shopping malls.

‘Currently, I am just trying to survive,’ Nikos says. ‘Like many Greeks I’ve been seriously thinking about leaving the country. It just feels like you are wasting huge amounts of energy working in Greece. It’s all about paying the bills, just to survive.’

‘Can you see a light at the end of the tunnel?’

‘Well, we have been making losses for more than 4 years now. Business is still dropping,

but it is dropping more slowly.’

Despite these financial hardships, Nikos has a positive outlook. He doesn’t agree with the protests that are held daily at the parliament buildings. ‘They are not protesting the right way. When the bus drivers strike I cannot use my bus while a politician can drive his own car. Of course they are very right to be angry at the government.’

‘Is the prime minister, Samaras, doing a good job?’

‘We were promised economic growth by the end of 2013, but we still do not see it our wallets. I do not think growth is possible with the current unemployment rates of 25-30%. These are the official numbers. In reality it is much worse. People with part-time jobs are counted as employed, even if they only work two hours a week. The government is the problem in the current economy. No one wants to invest in a country with such a highly unstable tax environment. Taxes get higher every year. The government is talking about how tax incomes are increasing, but that is only because taxes are getting higher, not because of more economic activity.’

‘Maybe the European support is a good thing then?’

‘No. Most of the things the current government does are in fact decisions taken by the Troika. They rule this country and they do not care about Greece. We are being forced to take their money and pay it back with 15% interest. The worst thing that happened to Greece was exchanging the Drachma for the Euro. Everything became much more expensive. Add to that the huge loans the banks gave to people without income and you know how the current crisis started.’

It is perhaps not surprising that Greeks like Nikos do not feel that they are a part of the European Union. The economy has shrunk every year for the last five years and the decisions forced on it from abroad have indeed taken a heavy toll on the country. But what about identity; ‘Europe is a Greek word right?’

‘Yes it is’. Nikos says. ‘But so is democracy, so are marathons. Do you know how much money Greece is making out of marathons?’

‘Nothing. But every day somewhere in the world there are marathons. It is a Greek thing. I think those marathons should pay licensing fees to us Greeks, at least 5,000 Euro per marathon. And we gave you the Olympic flame. But what is the profit Greece is making out of it? I think that Greece as a country is not selling the products it produces in the right way. You know, the marketing is really bad because they haven’t let private people get on with doing their business. It’s all about government and taking money, money, money. Every four years some country hosts the Olympics somewhere. It would be logical, normal, if that country would pay us, maybe 10 million Euros.’

‘Do you feel like a citizen of the European Union?’

‘No, there is no such thing for me. I am a Greek. If I was European I wouldn’t have to be afraid having Turkey as a neighbour. A unified Europe would protect us against Turkish threats. Now the government has to spend huge amounts of money on submarines, bombs, boats, and F-16s, to protect us, because we can’t rely on the EU. Greece is located on the continent Europe; otherwise there is no more of a special connection between a Greek and a German than between a Greek and a Chilean.’

But what about Greek philosophers? They are Greek but have influenced the European way of thinking.

‘The ancient Greeks have influenced the whole world’s thinking.’ He says firmly. It is clear: Nikos does not believe in the EU. I give it one last try.

‘I’m looking for European values. You are saying they simply do not exist?’