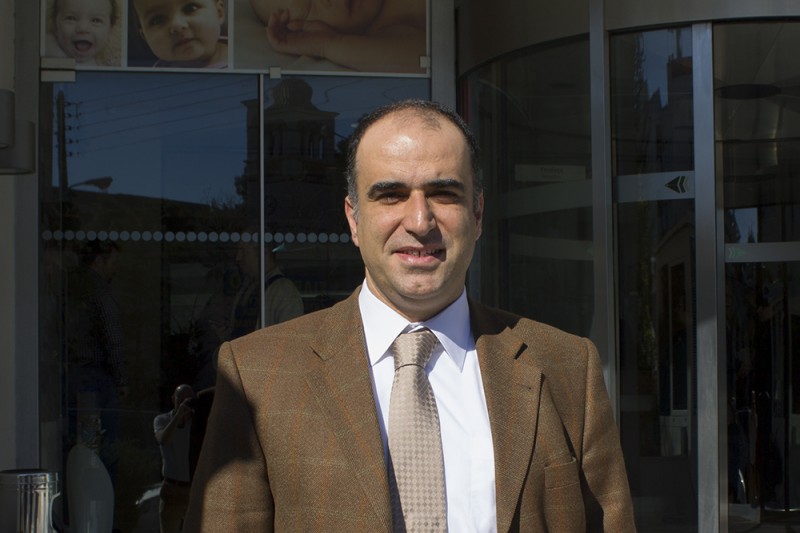 A lot of people want to have babies. And a lot of people need help having them, also in Athens. It’s 10 AM and the waiting room in the Genesis Athens Clinic is overcrowded. Mostly couples, some very young, others not so young, and in some cases it’s not entirely clear whether the woman waiting would like to become a mother or a grandmother. Black and white photographs of babies, hundreds of them, smile at visitors arriving at the clinic, which is located just outside Athens city centre. A bronze statue at the door welcomes them: a man, a woman and a baby offer a not so subtle reminder to the visitors of what an ideal world looks like. (I’m not touched at all – what does that say about me?)

I have to wait too; doctor Kostas is a busy man. But above all a friendly man: after fifteen minutes he guides me to the small garden of the hospital cafeteria, orders fresh orange juice and tea for me.

‘I’m a big fan of the European Union,’ he says immediately. ‘It made it very easy for me to study in Brussels, where I specialised in IVF. My documents were automatically accepted, I was never considered second rate. I really faced a serious dilemma. Coming back here to Greece or staying forever in Belgium. I chose the first one, just for sentimental reasons. But I would not have had any problem staying there. Or in any other part of Europe, because I like it.’

He receives a phone call, something medical I assume, and he answers quickly. When talking in Greek his voice and face alter, funny how a language does that.

‘But there is no such thing as a European identity,’ he continues. ‘The crisis has exposed this more than ever. Public opinion, whether in Germany, Belgium or the Netherlands was completely against the Greeks at the beginning of the crisis. It is a lack of solidarity. We are quick to accuse each other. We are a family but we do not love each other a lot. Some Germans think: “Why am I obliged to pay for the debts of the Greeks?”’

‘Why do you think they should? Because family members help each other?’

‘I think that it is logical to do so. After the war Germany had a lot of debts to Greece, but we did not force them to repay, because we wanted them to be able to rebuild their country. We do not hear that now.’

Kostas does not see the Greeks as saints however. He talks about the problems in present-day Greece. About politicians who promised a lot of things to voters, only to leave the country on verge of bankruptcy. ‘We need a change of mentality,’ he says with a big sigh. ‘We want politicians to be honest. They are the ones who have to take the necessary measures in order to construct a country that can be autonomous again. I want a country that is able to understand that its future is in development and in autonomous policy, within the EU. I want the EU to help us construct a new country, not to punish and destroy Greece.’

‘Do you have friends who are politicians?’

‘Yes, they are the good ones.’ He says it without a drop of irony. ‘I do not know what they have done specifically. In the general they are the honest ones.’

‘Are there a lot of people wanting to become politician now?’

‘Not a lot. They are afraid of public opinion about politicians. We need changes in our political mentality. We should not vote for the party that offers us the most. We want politicians to be honest with us.’

‘No more You vote for me and I give you money?’

‘They gave us jobs which should not have been offered. That’s why the public sector here was, or still is, enormous.’

‘I worked a little bit in the private sector before going to Belgium. I met honest people. But there are many dishonest people here too. Who ask for extra money to operate.’

‘Funny that the Oath of Hippocrates is Greek.’

‘Yes, on the other hand, for lots of years doctors in the public sector were not paid correctly. They were paid much less than the average trainee in Holland or Belgium. That was their argument for asking more. There are always excuses for being dishonest.’

He’s a busy man, doctor Kostas, but a wise man.