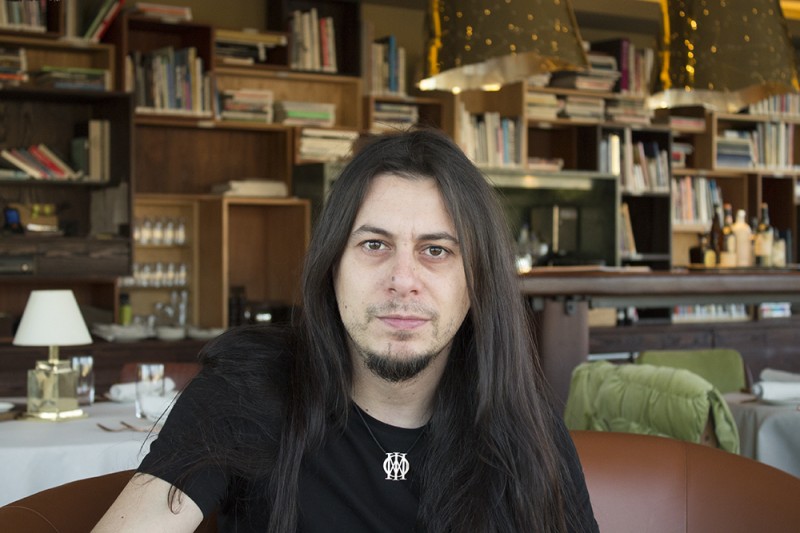 Every profession has its own uniform, and Bob is wearing his: black clothes, leather jacket, boots, a couple of tattoos and long hair, also black. He’s a heavy metal rocker.

‘Is it a requirement?’
‘To be honest, there is no logical explanation for why we all wear black clothes and have long hair; I’m a happy guy and watch a lot of comedies,’ he says smiling.

That is often the case with heavy rockers: they look violent on stage, screaming songswith titles like ‘At War With Satan’ and ‘Welcome To My Nightmare’, but in person they turn out to be soft-spoken, tea-drinking vegetarians. ‘But maybe you could set a new trend, like Angus, the AC/DC guitar player, who always plays in a school uniform,’ I suggest.

‘If you are famous, maybe it’s possible. But the rock dress code was fixed in the 80s and everybody had to follow it if they wanted to be part of the scene. Now I don’t care what I wear, but I feel comfortable in these clothes.’

And Bob is quite famous. Not as famous as Demis Roussos or Vicky Leandros, two Greek popicons from the seventies, but he’s regarded as Greece’s most successful heavy metal keyboard player, active for two decades in several bands. The only drawback isthat Bob is only famous in a very small corner of the Greek musical scene: Greeks don’t listen to heavy metal, they listen to bouzouki, traditional Greek folk music. And today the country’s pop stars perform in bouzouki clubs.

‘They mix the traditional bouzouki with Arabian music, pop, even hiphop. It’s an eclectic mix, while the performances are a mix of a club night and a concert,’ Bob says, while rolling a cigarette. ‘But they pretend it is really artistic; a lot of bouzouki places are now called theatres. Of course it’s not: people are sitting at tables, eating and drinking.In Greece you basically have two options as a musician: playing in these places and making a proper living, or going your own way. Like many of my friends I once was offered a job for playing keyboard with a very famous Greek singer. After two rehearsals I knew that I definitely shouldn’t do this. I remember coming home, feeling so depressed that I wrote my first pianosong that night. It flowed out of me, I wrote the most romantic thing ever.’

‘When was this?’
‘Sixteen years ago, I was 20 and had just finished doing my duty in the army.’

‘So the end result was a good thing?’
‘Yes. I called the Greek singer and said ‘thanks, but no thanks.’ Instead I chose to play in a metalband at a Viking open air festival in Germany.’

His career took off from there: he and his band Firewind play in arenas and clubs all over the world, opening for bands like The Scorpions, touring from Japan to Spain and Scandinavia.

‘Do you earn enough from your music to live on?’
‘I have a nice apartment with my cats, I’m good. I don’t do anything else, I don’t teach now, although I did for a couple of years. Now I earn 3,000 euros a month with the band, my video productions and solo projects. He looks like Mr Bean, by the way,’ he says, pointing his thumb at our waiter.

‘Are your parents happy that you are a musician?’
‘My mother doesn’t really know what I’m doing. She always tells me “ok, enough with all this stuff. When are you going to work and start your own conservatory?” My father is actually very proud. ‘You know, in general it doesn’t sound so good when you say you’re an artist. Then the next question is always “how do you make money?”Actually, I make more money than a bankmanager. But of course the most important thing is that I’m happy with what I’m doing, with my music. Unlike most of my friends playing in the bouzouki places.’

‘What is it like to be a musician in Greece? Does the government help you for example?’
‘Well,’ he says, rolling another cigarette. ‘My band had a number one album last year, but nobody cares. If it is not somebody singing in Greek, it doesn’t matter. I know other countries, Sweden for example, support musicians much more. The city gives musicians free hours of rehearsal or maybe you can get a loan to go on tour.Greece actually has a lot of great guitarists. But you know what happens? They all end up in the bouzouki theatres…’

‘Greece is not good for musicians, I understand. But is it different for painters or writers?’
‘There are some foundations supporting more traditional forms of art like sculptors and painters.But it is limited, because you don’t have an example of somebody who is famous outside and that is what the Greeks need: only people who have achieved fame outside the country, are taken seriously at home.’

‘Last subject, Europe. Not the band Europe, oh well what do you think about them? You think they suck probably because they are shampoorockers and fake, don’t you?’
‘No.’

‘I only know The Final Countdown.’
‘They did stuff before.’

‘Maybe that’s better.’
‘The Swedes, that’s where Europe is from, are good at metal. But the European centre of rock is Germany. They have the cheapest music instruments. They ship worldwide. They have the best festivals, everything. So even in this they are the capital.They are politically and economically dominant.’

‘Is that a good thing?’
‘No. Because to me the whole European thing is a failure. It is tryingto equalize all these different people, to smooth, to trim the edges. To shape it, make it like Germany. And then you cannot have countries like Greece and Romania. On the other hand: working with Germans is good, you can trust them.But they have an attitude against us.’

‘Arrogant?’
‘Yes. They always think we are inferior. Lazy thieves.’

‘You have travelled a lot. Is there a common factor, something European? Are people living in Europe different from people in America or Africa, in terms of values or the way they approach life? Are you European?’
‘Yes. Maybe they are more open to multicultural experiences. I think it is more difficult for Africans or Asians to accept different things. They are used to one thing.’

Later we share a taxi and I mention some famous people with Greek roots, including Jennifer Anniston. ‘She’s cute,’ says the singer from We’ll Rock You To Hell and Back Again.