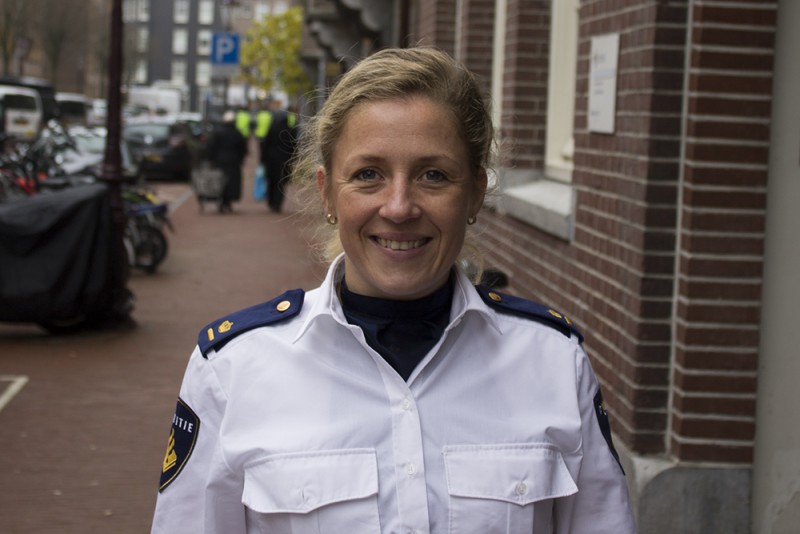 ‘When I was 4 I decided I wanted to be in the police. I think it started when the pond in our village had to be pumped dry because a firearm had been thrown into it. I wanted to be right there in the thick of it. Later I realised that I always want to take the lead, whether we are performing CPR or have been called out to a shooting incident. Whereas other people leave when things get tense, I take a step forward.’ Verona, who is 37, is small (1m65) but courageous. Fresh-faced and energetic, with her hair pulled back into a blond ponytail, she is the quintessential Dutch woman, the glory of our nation. She is team head of the police station in the Balistraat in the eastern part of Amsterdam. The station, housed in a former school, is located smack in the middle of the neighbourhood and is surrounded by ordinary houses. The neighbours to the back of the station are only four or five metres away. And since we don’t do curtains in the Netherlands, the police are in full view of the neighbours. ‘Yes, and we can see them,’ Verona says. ‘We are always aware of one another.’

Apparently you have nothing to hide

‘Not here, not in this room. Of course we have information we can’t make public, and the briefing area is shielded from view.’ But they have few secrets in another sense as well: volunteers work in this office, including the woman who is now tidying up the archives. ‘There are 11 of them at this station, people who take care of gifts, tidy up desks creatively, but who have no further insight into police work.’ Volunteering to work at police station: not long ago I would have said it doesn’t get any crazier than this.

It is a very mixed neighbourhood, where trendy tea shops, wine bars and slightly more upscale clothing stores are setting up shop next to Turkish and Moroccan grocers. I wonder how that is working out.

I have heard that young Moroccans think they can get away with more here than they could in Morocco, where the police are much stricter. How do you deal with this?

‘I think that we are different. But the police here are adapted to our culture, while the police in Morocco are probably more suited to their social situation.’ Equal treatment is important to the police in Amsterdam. ‘Will I be stopped sooner if I’m a Moroccan? That is ethnic profiling, something that Amnesty International has been very keen to prevent; we have had some good discussions with them. Are we going to pull over every Moroccan boy on a scooter wearing a jacket with a fur-trimmed hood because they score high in terms of crime potential? No, we can’t select on that basis, there have to be other circumstances. It gets very personal. I have Surinamese colleagues who would rather drive an Opel than an Audi when they’re off work, because otherwise they get pulled over all the time…’

The neighbourhood has changed, like society. ‘It is more individualistic. The neighbourhood is less inclined to smooth things over when something happens. They would rather call the police than knock on their neighbours’ door. They don’t know them, they look different, they might not speak the same language.’

When I compare the Netherlands to other countries, it strikes me that the Dutch do not behave very well in public. In Germany, pedestrians do not cross the street on a red light like they do here. Here people on the underground put their feet up on the benches, play their music full blast or are shouting into their telephones. Do you see that too?

‘We are a stressed-out country. Maybe because it is so small, and there are too many people. People want more space, and they claim more space. I bicycle to the station every day, wearing civilian clothes, and I so often get people shouting and swearing at me.’

Do you feel European? Does that mean anything to you?

‘Well, for me, for some reason or the other, the euro really symbolises more familiarity. It takes less time to prepare for a trip abroad. In the past you always had to think ‘oh yeah, I have to exchange money and they speak a different language there.’ I have noticed that because of the changes in Europe a lot more people speak English. And you notice it too in the number of exchanges: it has become much easier to study at universities in other countries.’