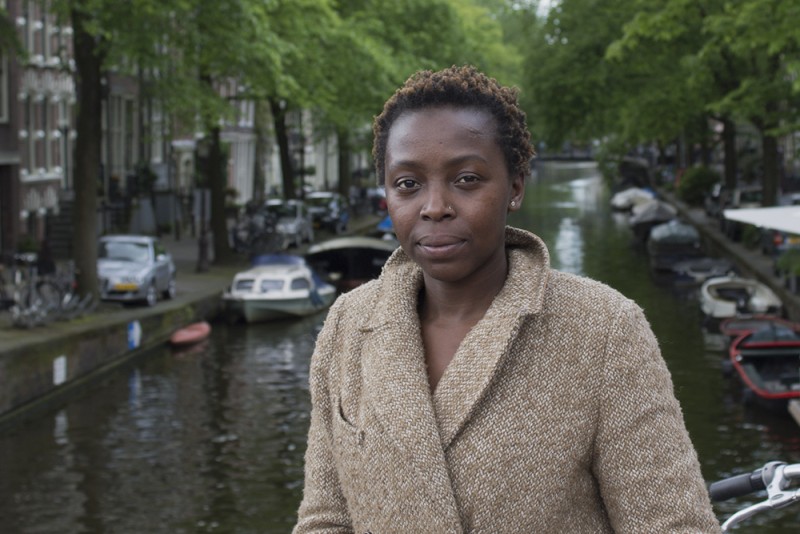 This interview is a bit different from any of the others I have done for Youropeans. That is because I know Sandra quite well: she has been my cleaning lady for the last few years. She is also an immigrant, from Uganda. And an artist, a graduate of Amsterdam’s prestigious Rietveld Academy. The main topic of this talk is her struggle to gain a residence permit – one with a happy end, after five long years…

How did you come to the Netherlands?

‘In 2006 I arrived in Amsterdam, to study. I wanted to do my Masters in Scotland, but when I had my son, Otis, I decided to stay here. And that’s when my problems with the Dutch immigration authorities (IND) started.’

What kind of trouble did you get into?

‘The procedures were way too long, due to the fact that the IND is a very bureaucratic organization. I got to a point where it did not even matter to me if my application was rejected: I just wanted an answer, so that I could get on with my life. Everything was at a standstill. It was a really stressful time, because I was afraid of the unknown. You know, the system is very rigid and it does not look at the human factor at all. My son is Dutch, but that did not change their view. They even told me: “you can take your son with you, nobody says you have to leave him here.”

Were the rules clear for you?

‘Not at all. They contradict each other all the time. But at the same time, I am not a political refugee: I left Uganda by my own choice. So that is why they say they do not have any obligations towards me. My friends in other European countries they tell me the rules there are much more lenient.’

I heard that IND easily allows gay people from Uganda, because apparently their country it is not safe for them. Maybe you should have told them you were a lesbian.

Sandra laughs – she has a good sense of humor (that alone should be a good reason for allowing someone to stay in the Netherlands).

In the end they granted you the residence permit. How did you react when you heard the decision?

‘I did not hear it from the IND, but through my lawyer. And I was more relieved than happy…’

Will you be able to vote in the May 22 European elections? Do you care about them?

‘I was already able to vote in the Netherlands. You get that right as soon as you are registered here.’

Is it true you vote PVV (the anti-immigrant party), most of the time?

She laughs. And says: ‘I don’t know what to vote for, as I do not really understand Dutch politics. Besides, I do not think my vote can make the difference. I will still have to fight much harder than a random Dutch person.’

Even now you have the right papers?

‘It is also just my surname. If I apply for a job I am not a priority, whether I speak Dutch or not.’

How do you know?

‘I experienced it a lot. In every country they hire the nationals first. They will not hire me if a Dutch person applies for the same job. They don’t say that you are rejected because of your origin of course.’

Sandra tried to find work in the cultural sector, in which she has her degree, but has had no success so far. To improve her chances she has started taking a Dutch language course.

Why didn’t you learn Dutch before?

‘At first, I did not know if I was going to stay. At the Rietveld Academy I simply had no time. I was doing a full-time study and had to take care of my child. Lastly, the Dutch courses were very expensive. Only recently has the Amsterdam municipality started giving free courses. You still have to pay for the exams though.’

If you were on the other side, the government side, what would you change besides the long waiting times?

‘The language courses for example: I would make them totally free, the exams too. If you want people to learn a language, requiring them to pay a big part of their small income for the lessons does not encourage people.’

It can’t be all bad. What do you like about living here?

‘If you leave your home country there is a lot to adjust to. Luckily Amsterdam is easier. Many people speak English. I am grateful for meeting different people from all around the world. The diversity is good for developing yourself. I really do not like one-directional thinking.’

Now that she is a legal resident Sandra has access to public funds. To the Erasmus Fund for example. She hopes to be able to take part in an art project on the Azores, but because her son has school, and she does not want to leave him behind, she is not sure if she should go. ‘My residence permit can be revoked if I get into trouble. I am afraid that taking my son with me when he should be in school would create problems. The truancy officer might not like it.’

What did you think about Europe before coming here?

‘You hear all these stories. Like the cliché about Africa that there are lions and other wild animals everywhere. The stories about Europe were that everything is clean, everybody is rich and the cities are very modern. When I came to London first in 2002 I saw that Europe, well London, is like all modern cities. There are very poor people too. Like myself. If somebody would see me they would think I am well off, but I am not. I have had to struggle for the last two years. To be able to stay here and to get the right to work. That is a contrast with my own country. You know, my mother lives in her own house. She is not rich, but she does not pay rent. Here, I have to pay for my own house in the Jordaan, I have to pay my medical insurance every month. I have all these costs for languages courses and other immigration-related things. And my income is low so by the time I have paid everything there is not much left. Comparing my situation of a year ago with my mother’s situation, she was definitely better off in ‘poor’ Uganda.’

Do you think you have formed some sort of connection with Europe or with the Netherlands?

‘The reason why the Dutch government, the IND, finally had to allow the residence permit, is based on a verdict by the European court, not on Dutch law. So that creates some sort of connection with Europe. The connection with the Netherlands is because I live here.’

Make no mistake: the topic of this interview didn’t make Sandra very cheerful, but normally she is very upbeat. And if, by the way, you want to know more about East Africa, go to her site: www.sandrawnanteza.info.