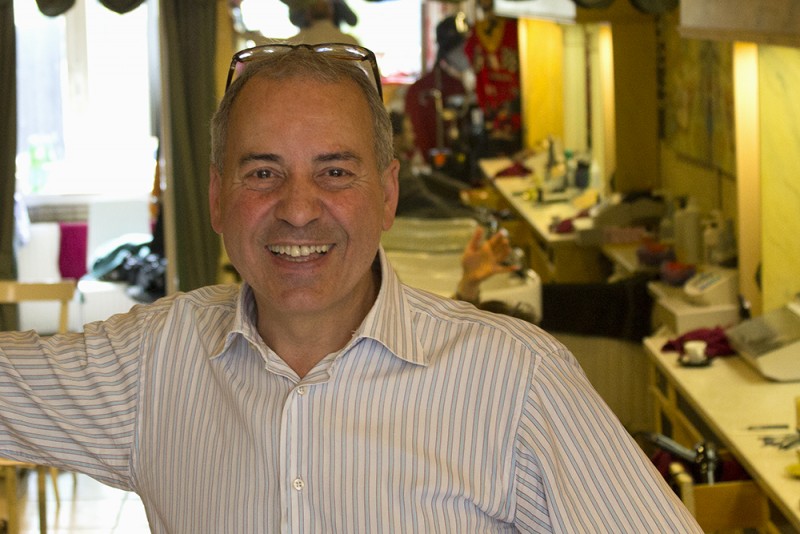 When you enter Salvatore’s hair salon you leave the Amsterdam district of de Pijp and enter a Roman temple. A temple dedicated to Ferrari, that is. After the initial confusion, you quickly realize you are in a traditional barbershop: only three seats, no option to pay electronically and a slightly dated interior. ‘Sometimes people say “shouldn’t you do a bit of renovation?” I won’t. This shop has a soul. Renovating that would destroy it. Its replacement would be a salon like thousands of others in Amsterdam. I do not think that would be a good idea.’

Salvatore, every inch an Italian, has had this shop for 36 years. Many of his regulars have been clients for that same length of time. Not that he attracts only the old and grey: while we’re having the interview a student pays and leaves. ‘A new customer,’ Salvatore proudly says. ‘I get many students lately, and I do not advertise. They come here by word of mouth. Authenticity is important for them as well. Of course cutting hair is a traditional Italian craft, like salvaging ships is Dutch.’

You talk about us and you, Dutch and Italians. Do you feel more Italian then Dutch?

‘I feel both. Except when Italy plays football against the Netherlands. Then I support Italy. Clinging to your identity is stronger when you start living abroad. After a while it starts fading away, which is not strange: my wife is Dutch and so are my children, and my friends. But I still have many Italians as friends too. When Italians learn I have my business here, they start to visit me as well.’

Salvatore came to the Netherlands in 1970 with a big wave of Italian migrant workers. ‘I came to Amsterdam when I was 19 years old. We stayed at a hotel near the Vondel Park. It was the time of flower power and hippies. When I saw all that I knew I wanted to stay. But I never became a hippie or let my hair grow long,’ he adds with a grin on his face. ’You could always see that I was an Italian’.

What do you like most about being a hairdresser?

‘I am very curious about my customers. When they come in here I always try to get them to tell their story. With some people that just does not work. I have one or two clients that come in, say “hair cutting please”, and nothing else. Those people I do not bother with more questions. It takes psychology: you have to make customers feel trusted. Of course the hair is important, but maybe the talking is even more important.’

About Europe, what do you think?

‘At the start I was very enthusiastic about the EEC, as it was called then. It was all about working together. But nowadays, things have not turned out as expected. Brussels is interfering with the national governments of countries.’

What did you expect from Europe?

‘I expected less bureaucracy mostly. When I came here 45 years ago I only needed a working permit and a visa to enter. That has improved a bit, of course. But for example: Sicily and Lampedusa are currently overrun with African refugees. Those islands are crowded; the Italian government cannot handle it any more. The rest of Europe does not want to help the Italians; they let the Italian government deal with the problem. All the while the refugees do not want to stay in Italy, they want to go to the richer European countries like Germany and the Netherlands. I think we need to divide those refugees equally over all European countries. On the other hand, we cannot let all of them in, because if you do, you will only create more problems and internal instability. I think we must place l a maximum on the number of immigrants each year.’ He talks freely about politics. In that sense he is a traditional hairdresser as well: he has an opinion about anything and everything. ‘But look at Ukraine, if you see how Europe is slowly getting more involved there. If we are not careful we will slip back into a Cold War situation there. Putin can cut off our gas supply. We can only answer with words. I think all world leaders should be women.’ He laughs.

Are you sure you’re Italian? That’s quite an anti-macho statement.

He is serious again. ‘They ruin the young generations with this talk of wars. Some of my clients have been in conflict areas. Their stories are horrible. The ultimate goal is to make sure we are all able to live together. And to do so, if you want to live here you have to respect the rules of this country. That is not populism, I did so myself when I came here.’

You may live as a Dutchman, but all the same, you have created Little Italy here.

‘Yes but in a flexible way, not radical and fanatic. Like this country is. The Netherlands is still very tolerant, whatever may have been said in the media in recent years. If you knock on a stranger’s door here they will help you. That is quite different in Italy.’

What do you think will happen to Europe, will it become one big state?

‘In the end it will be all right. I think it is inevitable that the EU will eventually be united. A system must not be changed radically, but slowly adjusted. We should be proud to be European, while always cherishing our differences.’

During the financial crisis, there was talk of splitting the Euro zone into a northern and a southern union, because the northern countries did not want to pay for the weaker southern member states. What do you think about that, being both Dutch and Italian?

Does Europe have the historical duty to stay together?

‘Of course, and not only for trade. There is no reason for us not to be together. Sometimes I have people from ten different nationalities in my salon, all talking together. That works very well. That’s how it should work.’