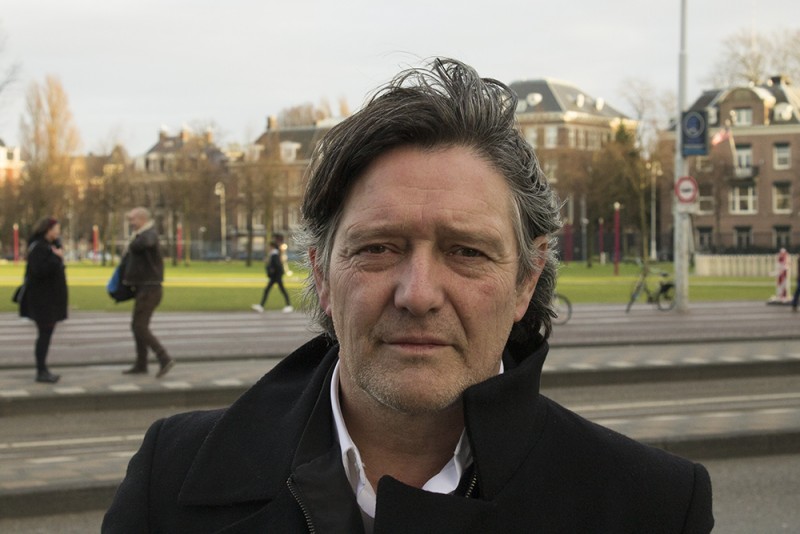 He wouldn’t call himself pro-European, but he doesn’t reject his European roots either. No, the actor Pierre Bokma ‘feels more comfortable with a European’. Having returned this morning from Germany, where he works with the Müncher Kammerspiele, Bokma talks about art and the battle between mysticism and technology in Europe. We meet in a café next door to the Concertgebouw in Amsterdam, his own cultural habitat. He travels to Munich about once a month, and in Amsterdam he is rehearsing a new play that is highly critical of the banking world. But when I ask him about his second heimat, he replies: ‘Live there? No, no, no. Never, no.’

‘Here you have the wind and the panoramic views. Germany doesn’t have that. For me the panoramic view represents inventiveness, adventurousness, and imagination. In Bayern, people have the forest in their genes. We, on the other hand, are seafaring people. It makes for a big difference in the way we think, and feel and in our inner knowledge. The higher the mountains, the more isolated the community. Genetically, and in terms of language. The same is true of Austria: there are still backward people there who sympathise with the Nazis. So incredibly conservative.’

You work in both countries. Is there a difference in status? Let’s start with the Netherlands. Where does the artist ran k on the social ladder?

‘In the major cities, very high. In the countryside there is more fear, more ignorance and distrust of anything new.’

‘There is much more cultural awareness In Germany, because in the 19th century the country consisted of many small principalities, and everyone had some kind of local involvement with their own little state.’

What is the current situation in the Netherlands? What is the relationship between the government and culture?

‘What really irritates me is that Dutch politicians know absolutely nothing about art. As I said before, artists are valued in the city but mistrusted in the provinces. In politics, the provincial attitude wins out.’

So the fact that the Assistant Secretary continues to cut and cut the budget, to the great dismay of the cultural sector…

‘It’s okay to cut, but now it looks more like revenge. He is not cutting budgets by 60 or 70 percent, but 220. That is not is percentage, it’s a voltage. On the other, I don’t think it’s such a bad thing that people who create art that no one wants to see should be phased out at some point.’

You are established, the country’s best actor. It is easier for you to say this than it is for a talented glass blower. Who buys glass art?

‘How can you tell if someone’s talented? That implies that you like it, doesn’t it? Talent is very hard to define.’

But what about a renowned poet who sells no more than eight hundred volumes. No one can survive on that.

‘Then you just have to accept that. Do something on the side. There is no obligation to keep hanging on.’ Pierre raises his voice. ‘That’s the problem in this country. Everyone moans: “I have a problem, why doesn’t someone help me?”

But doesn’t it say something about a country when bankers are so well paid for work that doesn’t really require much talent?

‘Actually, everything the bank earns is stolen,’ says the star of De Verleiders, a play about financial fraud. ‘Something of value has to be created. It has to find its roots. And slowly that will trickle into the consciousness of the intelligentsia, and continue to trickle down from there. Of course the problem is that not everyone is equal. In our society, which is based on Western philosophy, we have abandoned mysticism and allowed ourselves to be carried along by technology. And because that resulted in products that are all more or less the same, we started to believe that people should be like that too. I think there should be more room for differentiation, and that we should be able to say that not everyone is equal.’

That we are all of equal value, but not all the same.

On the subject of Europe, Bokma has read and thought about it a lot, and he has much to say about it. He is in favour of further European unification. ‘I have a lot a sympathy with Verhofstadt, but there is no real plan, and you to involve everyone in that. Not only sitting politicians, but the underlying base, a sort of secret fifth column, with special negotiators. People who stay calm when the surface water is choppy; below that it should be calm. Über alle Gipfeln is auch Ruhe.’

What should the outcome be?

‘An incredibly intelligent, smart, humane, merciful, complete consensus. Ach, if we didn’t have such cold feet we would have had a central government long ago. And we would generously grant it all of the most important powers in our region. But I don’t think there would be much support for that in the Netherlands.’

Pierre has outspoken ideas about other Europeans. He is not fond of the English; France and Italy needed to be reformed, and as for the Greeks: ‘They’re a bit like mice thrashing around in a trap. And the problem is that they won’t take any responsibility themselves.’

They think that the EU is ruled by a Calvinist, northern mentality.

‘Yes, and I think that is nonsense. Their problem is that they have never paid a cent in taxes, as a result of which their state treasury is deeply unstable. And their refusal to admit that is absurd. But it’s part of the southern mentality; an Italian never admits corruption either. Strange, really, if you think about how well managed the Roman empire was. Of course, it was also run by foreigners.’

Caesar, for example, actually came from Hispania, from Iberia. They say he had a really thick accent.’

Finally, what do you think it means to be a European?

‘A European is a racial given. A Caucasian. I once saw a map drawn up by Freddie Heineken. He divided Europe into cantons, on a sort of tribal basis.’

So he put the Ruhr Valley and Limburg together, maybe included Liege?

‘Yeah, I think so. I think that a relatively high and equal standard is applied to a lot of things. When I talk to an Italian about culture, there may be differences, but the basic level is just as high. That is true of the Greeks as well, and the Romanians. The cultural transmission is easy. The interests are the same, the curiosity is the same. We are all more or less on the same frequency.’ He steers the conversation back to race. ‘The difference between me and a Spaniard is genetic. I am familiar with the difference, I don’t have to be afraid of it. Meeting an Inuit or someone from China. The distance is much greater.’

So you feel comfortable around the average European?

‘Yes, but that doesn’t keep me from travelling all over the world; I enjoy that.’