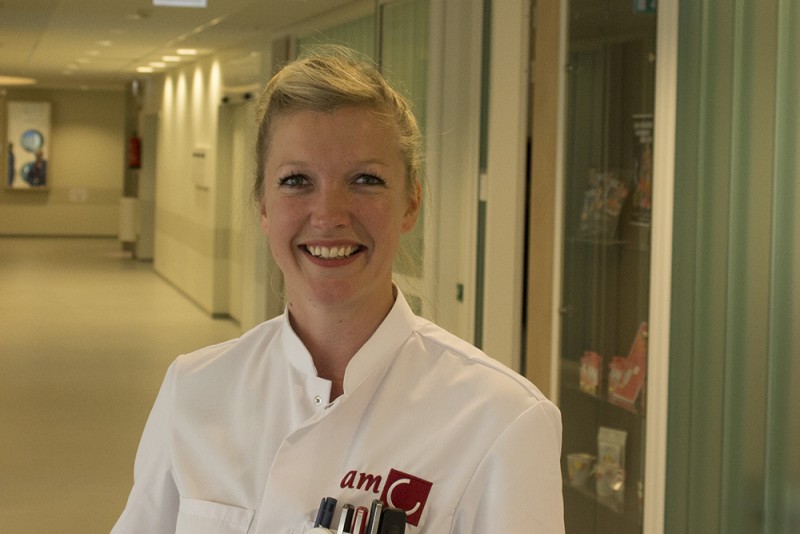 She leads us through her department, one of the saddest in the hospital: the intensive care unit of a children’s hospital. Every now and then we catch a glimpse of a sick child, sometimes with a parent perched on the edge of the bed, sometimes alone. For now, everything is quiet as the staff calmly go about their business. But it’s the 5th of December, and from a few corridors away we can hear the sounds of a celebration as Sinter Klaas and his helpers make their rounds, distributing sweets to the children. ‘We often organize events like this,’ Hilde says. ‘We hope that it will give the children a break from thinking about being sick, and let them just be kids for a while.’

She is 34, a fully-fledged paediatrician who entered medical school in 1999, and is now sub-specialising as a paediatric intensivist. 15 years …..

‘Yes, but look where it got me: it’s a wonderful profession! One side of it involves acute care. I’m on call right now. The other side of my work involves helping patients over a longer period of time. My contact with them is more intense. What I like most is actually being able to cure people. It’s not always possible, of course. And I know what our limitations are: sometimes I know that a child is going to die. It is often a very intimate moment, being present at the death of a child. How can I make this as bearable as possible for all those concerned? I think that being able to help in such situations is also one of the best aspects of being a doctor.’

How many times a month do you have to have that conversation?

‘It happened this past week, on Tuesday, and on Wednesday we decided to stop treatment. The child had actually already died. The machines were doing all the work, and had taken over almost all functions. We decided to stop that. Then you talk to the family about how to handle the situation, about how everyone will say goodbye.’

What does that do to you? Is it an advantage to live in Rotterdam, so you have some travel time?

‘I leave things here; I have learned how to get closure. But I have also done my share of crying. If you can’t do that, then you need to worry, because you’re not doing your job properly.’

When did first know you wanted to become a doctor. Was it a childhood dream?

‘I was always a bit of an outlier, I guess. I failed the test. So I signed up for medical school. Once I had started I knew immediately that I wanted to go into paediatrics.’

You said you studied in Ghent for time. What did you think of the way the Belgian doctors interact with patients? Is it different in the Netherlands?

‘The profession itself is the same, but in the Netherlands there are more protocols, so that everything is done in approximately the same way. In Belgium, many roads lead to Rome. The doctors there have had very good basic training, but their organisational skills are not quite as strong. Belgians are also less direct. They may smile and say ‘yes’ to your face, but behind your back they are thinking ‘no’. I found that very confrontational when I lived there. Fortunately, it all changes when you get to know people. A big difference is the fact that patients often bypass their GP and go directly to the emergency room, for example.’

It sounds as if the Dutch system is more efficient.

‘The Belgians see the extra link in the system as a threat. The GP may not recognise certain symptoms, and fail to make the correct diagnosis. As result, patients are sicker when they are admitted to the hospital. However, the Dutch systems filters out a lot of distraction.’

You have identified fairly big differences between us and Belgium, our neighbours. Do you think that other, more distant countries, Greece, for example, are worlds apart from us?

‘Yes, although I also see something really good in this. That all of the countries in the EU retain their own identity. I believe that the we should see the EU more as an economic union. To make us stronger in relation to the rest. The Netherlands is too small to be independent; we will always be dependent on other countries. Brussels shouldn’t interfere with culture, or with what people put in their shopping baskets.’

Do you feel that the EU wants to interfere in that way?

‘I think that they would like to see the EU countries and identities as one. But the people are so different, you can’t force them to be unified. There are traditions and cultures that go way back, that are centuries old. You can try to harmonise as many things as possible, such as taxes or healthcare, but you will always encounter certain problems. A Dutchman is a Dutchman and a Belgian is a Belgian.’

I have now spoken to 24 doctors and what struck me was that they were not so very different from one another. How do you see this?

‘It’s funny! The medical profession requires a certain attitude towards life. A certain kind of enthusiasm and dedication. I think that this is same everywhere in the world. But the nature of the patient-doctor relationship is of course culture specific. In the Netherlands and England, patients are very direct. The real doctor-patient hierarchy is becoming a thing of the past. But here too, there are cultural differences. The Mediterranean countries expect the doctor to prescribe medicine. The patient who goes home empty handed thinks the doctor isn’t any good.’

How would you describe yourself. Are you a euro-sceptic, or do you see the benefits of the EU?

‘I see the benefits. We are stronger, and we have closer ties to other countries. It is also easier to go on holiday in other EU countries. You can go to places that took a lot more effort to reach in the past. The thresholds for travel to other countries are much lower. Because Europe is calmer, and we can now travel to areas that used to be less accessible. In that sense Europe is much more open, and its citizens are content to stay here. There is less need to travel to faraway places.’

Do you think the EU is well-managed by the people in Brussels?

‘I think is very easy to pass judgment on all the things that could be improved. I wouldn’t like to be in their shoes. In all likelihood, they see very different things than we do, and consequently feel they have to take certain decisions. In that respect, it is a bit like a doctor-patient relationship.’