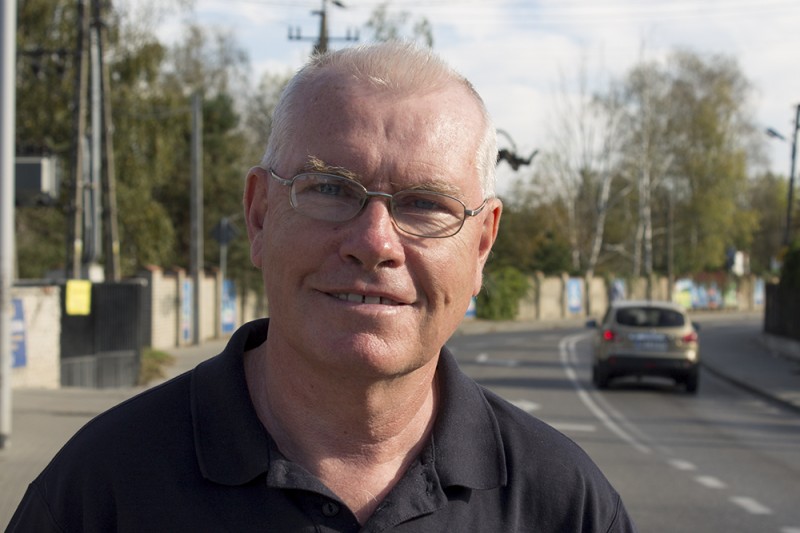 ‘I was in Rotterdam in 1973, working as a DJ in a rock club.’ Michael recalls. He is sitting across from me on a Sunday afternoon, and we are an expensive taxi ride away from Warsaw. One night – I was 22 years old at the time – I was high, after drinking and smoking hash. Some of the musicians who played in the club that night ended up staying in our flat.’ That’s when he saw the light: ‘It turned out they were what you call born-again Christians; they believed because they’d had a personal experience. While they settled into our flat, they told me: “Well, there’s a good way to find out if it’s real or not. You just open yourself to it and see. If it’s not real, nothing happens, and if it is, you’ll see.” So I did and bang! I’ve never been the same since.’

But you’re not Catholic?

‘We’re what you call ecumenical. I grew up watching Catholics and Protestants not only hate each other, but even kill each other. That made me think something had gone wrong somewhere. Aren’t they all following the guy who said “love your enemy”?’

In 1977 Michael worked at a Christian club for travellers on the edge of Amsterdam’s Red Light district. Through his contacts there, he got the chance to visit Warsaw. ‘At some point, some friends told me they wanted to go to Eastern Europe, behind the Iron Curtain, in order to spread the gospel outside of the church. They offered me the chance to come along if I was interested. So four of us went to Warsaw for six weeks. We fell in love with the people: they’re hospitable, warm and friendly. They’re also quite spiritual. Maybe that’s a trademark of countries where they don’t have much in a material sense or have more challenges; people there have to dig deeper and find something to get them through.’

He takes a sip of his drink, after which he continues: ‘Later, after our time in the Netherlands, my wife and I moved to Portugal, where our first son was born. While we were there, somebody wrote me a letter, asking me if I was interested in working as a DJ in Warsaw. At that point, we felt we were needed in Portugal, but we kept it in mind. About nine months later, we were in the Netherlands again, preparing to travel to Poland. We arrived here in February 1979.’

He explains that, because he didn’t have much money, he couldn’t stay very long. ‘I started working as a DJ in two student clubs. After two weeks, my wife came in, but the clubs couldn’t officially hire me, since I was on a tourist visa. There was only one government agency during those days, because everything was centralized. Unless you could get a signature from about ten different officials, you couldn’t get permission to stay. We went to the visa office to ask if we could extend our visas, but it was impossible. So my wife had to go back.’ However, things would soon take a turn for the better. ‘When I was working on the last night of my visa period,’ Michael says, smiling, ‘somebody came up to me. He said he had friends at the Ministry of Culture. I was hoping that this guy would really be a godsend and that he could help me out. It wasn’t easy, but he did it: I got an extension with a work visa. That meant I could stay a year and a half. My wife came back in, our second child was born here and I was an official DJ from that point on. During my wife’s pregnancy, we started to teach local people how to converse in English.’

Did you enjoy staying longer in Poland?

‘Well, we could stay a year and a half, but during that period there were all these strikes. We had to leave because everything was rationed; everything was on coupons and we had two small kids.’

Finally, after travelling to Malmö, and Vienna, and spending a few years in Indonesia and five in India, they returned to Poland in 1995. Shortly after his arrival, Michael laid the foundation for the charity organization he’s still running to this day. ‘Our kids had a singing group, which sang in hospitals and hospices for terminally ill children, so I reconnected with a cardiology professor I had taught to speak English years before. He asked if we could start those conversation lessons again. He also asked if I could teach his whole staff. While doing that, we noticed a lot of social needs. So we started contacting companies, telling them we knew people who required goods like diapers and such. And that slowly started to grow. We called it the “Warsaw Volunteer Mission”, which we registered as a charity in 2004.’

How big is it now?
‘We have a lot of volunteers now. At any given time, we’re looking to help between fifty and one hundred families in crisis. That’s our biggest project: helping families who’re poor and are struggling just to have the basics.’

According to Michael, the EU’s quite helpful, as well. ‘Clearly, there are a lot of positives, such as the fact you can travel on an ID card now. I think the social aspects are great, as well. For me, if I look at the Biblical model, it’s like socialism with faith: people share and the strong help the weak. In other words, new EU members like Poland are recipients now. Several projects are being financed by Europe: I know a lot of roads are being improved here, thanks to the EU.’

‘I like Europe a lot: there’s so much variety, beauty and richness in a relatively small area. If you’d compare that to North America, for example, there’s a richness of culture in Europe compared to the younger culture of North America. I’m happy to live here. Myself and my family may have had a bit of a different journey compared to most people, but I feel very blessed. My life has been an absolute gift. Not without heartbreak, not without tears, not without stress and difficulties, but hey, no victory without a battle, right? Changing the world, making it a better place, is not an opportunity that comes served on a platter. You’ve got to fight and overcome resistance.’

The Netherlands has been a Christian country for ages. That goes for the most of Europe, as well. So maybe the European values are the same as Christian values.

‘Well, that may be true. But at the same time if you go to churches in Western Europe, you’ll probably find most of them empty or half-empty. If you go to churches here, you’ll find them full. Even now. But you know, there’s no question organized religions make a lot of mistakes, but if you dig deeper, you’ll see what’s under there: love, man. Faith’s supposed to be a love generator, generating love beyond human confines.’