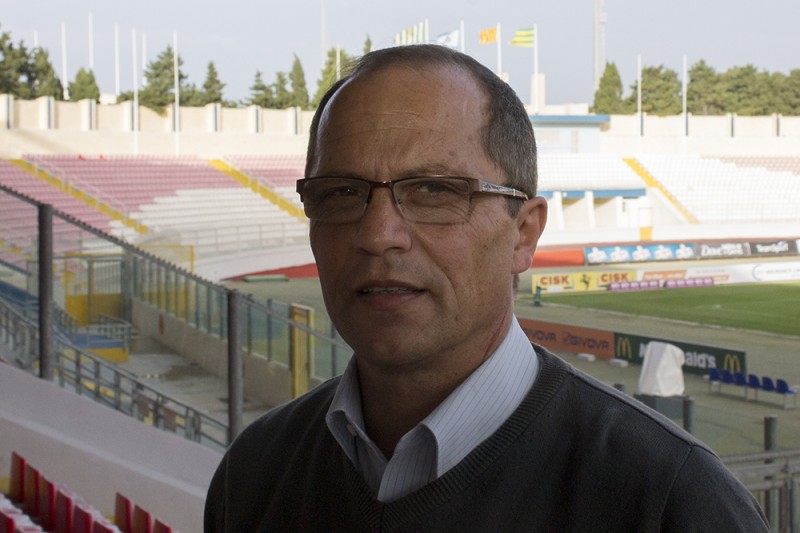 Meet David (51), Senior Medical Officer at the Malta Football Association, and one of the few sports doctors on the island. About the pros (and sometimes) cons of living in a small European country

Besides that, David has been Medical Officer at Playmobil for the last 25 years. The German toy maker has a big plant in Malta.

‘Most people will say there’s no such thing as a sports injury; it’s just an injury. There are archetypes of injuries, specific to the type work you do. Here we are very much involved with sports injuries, football mainly because that is the biggest thing here. Everybody knows everything about football; we used to say that there are 400,000 coaches here.’

‘You are probably one of the few sports doctors here?

‘Yes, there are not many like me, it is a specialisation. It’s not very profitable, if I wanted that I should have been a surgeon. I have been doctor with the national team since 1988, so that takes you around all of Europe. To Wembley for example. But honestly, I think the travelling is the worst part of the job. Carrying bags to hotels and planes and back from airport to hotel, training, hotel, game, airport.’

David is on the bench during matches and tells me he meets a lot of people and has shaken hands with all the big names in football. Somewhat jealous I tell him that I’m a big football fan and (like any Dutch boy) I dreamt of playing in the national football team. When I failed to reach that stage, I interviewed a few football players as a journalist. At the age of twenty I thought it was interesting, but now, 25 years later, I no longer think most of the players are very interesting. I wonder how a well-educated man deals with all those egos.

‘They are overpaid and they are very plastic. But it depends: there are some very nice people: Thierry Henry for example, he played for France. I met him in the dressing room after a game in France. He just handed over a shirt. I was surprised because I always had the impression that the top French players were snobs. I was talking to Dejan Savićević once; when his country Serbia was at war; we didn’t talk about football at all. Those are moments I treasure.’

In medical terms, is the level here as good as in other countries?

‘I would say so, yes. But, obviously with a limitation when it comes to certain specialisations, such as certain surgical procedures. Our limitations are mainly related to numbers. It’s expertise, so you have to keep up.’

On the day of the interview Australian cricket international Phillip Hughes passed away after being hit in the neck by a ball. David is blown away by the news.

‘He just burst his neck artery. If you are stuck on a field, that happens. It kills you. You can’t do anything about it and I dread such a situation. The Australian team doctor is a very well known international sports physician, Peter Brukner. But even if there had been an emergency room 15 meters away to operate him, they’d probably still have lost him.’

‘When you compare us to the rest of society, the doctor is well paid. Specialists in places like England of Germany are paid more. It’s related to the cost of living in the countries. I call our clinic the social services department. Many times we charge a pittance or, at times, nothing at all. Most of them are just individual athletes who just need advice. They’re all forking out money; triathletes who wake up at five in the morning, go to training, go to work, get an injury and pay to go for a training and to compete out of their own pocket, even around championships. If they get an injury then, we do our best to help them out and minimise their costs.’

Do you think there is a difference in Europe in the way people are treated? Is Malta different from Germany?

‘I would say so: in medicine we all speak a common language. When it comes to elite sports, such as a top club in England, the medical budget is limitless. Here we are trying to get the best out of our resources.’

‘It has always meant a lot. I always say the first European Union was based in Malta because we had the knights. If you go to Valetta, you find the Auberge d’Aragon, Auberge d’Auvergne, Auberge De Baviere et Angleterre, Auberge de Castille, Auberge d’Italie, and Auberge de Provence. It’s a very mixed culture and we have a very European outlook.’

So it was logical then that you become a member of the EU? It took a long time for you to join.

‘Unfortunately we were used as a political tennis ball. We have a two party-system: Nationalists and Labour. In the past, they were not in agreement and this was a matter of a heated national debate. Now both camps seem to have conformed, they accepted it.’

Malta used to be a ‘receiving’ country but that is about to change: Malta is about to become a donor. Does that mean you are getting richer?

‘Malta has always been very entrepreneurial and creative when it comes to trying new things and change. From a totally colonial-based economy, where we always relied on income rights from naval bases, we suddenly had to change to a free economy and the market economy. We had to create our own wealth and our own industry.’

‘Gaming is very big here. It employs over 6,000 now (out of a working population of 200,000). You can’t always rely on dockyards; they used to employ large numbers but these have decreased drastically. Also in financial services an IT. I would say it is a result of our policies on taxation and company law. Education is a big thing here.’

Did you vote in the EU elections?

‘Yes, I always vote. Sometimes we’re abroad. Once we had a game during an election. So we had a special concession to vote on the day prior. For us it’s the essence of democracy: you vote!’

He’s not the only one: the turnout in Malta is rarely lower than 90%. I wonder why. Are people more concerned? Is it because you are a small community and know the candidates personally?

‘Political decisions affect us directly. It’s not that we’re talking about general economic issues. We talk about whatever affects our daily life, such as the cost of petrol, cigarettes, foodstuffs, property etc.’

‘Yes, similar, that kind of mentality.’

I have learned that there are many advantages to living in a small community: not so much crime, people are more involved, have more of a sense of belonging. Maybe there are fewer depressed people here?

‘Compared to, for example, Northern countries definitely yes. But that may have something to do with the sun. It has to do with the family unit; it may also have to do with our religious heritage, though this is very much on the decline, in my opinion. Most young people still live with their parents, or if you don’t live with your parents, they live 500 meters down the road. It’s that close in this community. It’s like a small town: you know the barber, you know the policeman, and he’s the cousin of the butcher.’

What is your opinion on immigration?

‘As Maltese, we have always had mixed cultures but sometimes we just don’t accept people who just impose themselves. So, unfortunately – I am saying this generally, not specifically – people don’t come to the right challenge.’

If they come off a boat it’s more difficult to accept them than if they’d arrived by plane from Germany, wearing a nice suit?

‘Yes, that is my impression, it has nothing to do with racism and we couldn’t be really bothered by that. There is a kind of xenophobia, especially in the certain classes of the population, possibly stemming from fear and insecurity. And then, you get idiots. And you get politicians who are populists, they fuel it and then it becomes a thing.’