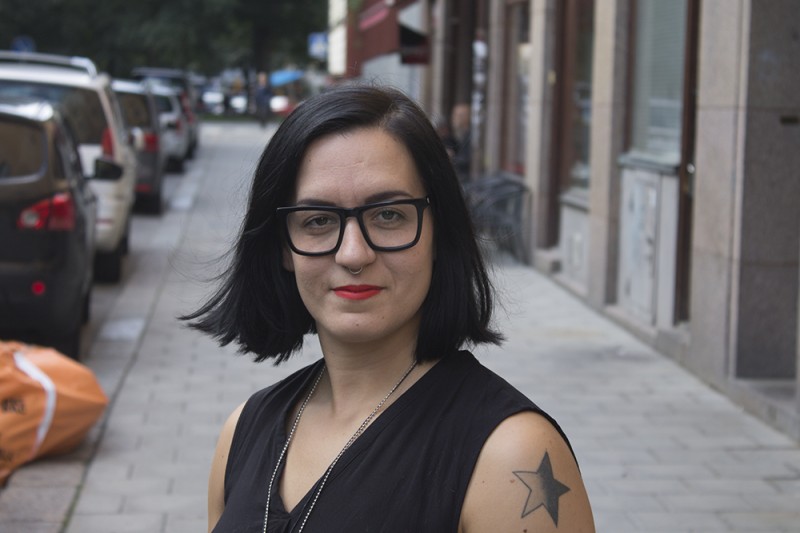 ‘I know things,’ Natalie says. She says this quite often during our talk, in fact. Sometimes seriously, sometimes not. But it’s true: she does know a lot of things, and not only about cutting and coloring – she is another example of how well informed and smart many of the hairdressers are whom I’ve met during the Youropeans project. ‘People don’t expect us to be smart and or to know about anything expect hair.’ She frowns. ‘But it is more than just hair, it is also about the service. It involves psychology.’

Four of her colleagues are working in the back room, we are sitting in the front of the shop where she works, the waiting room. ‘Imagine how many people we meet everyday. All kinds of people. Women, men, children, old people, young people. They have different lives and we learn so much by talking to those people. So I don’t think we are stupid at all.’ Her boss, occasionally lingers behind the counter a bit longer than necessary, listening to the words of the woman who is probably her most colourful employee. With her dark hair, thick-rimmed glasses, red lipstick and nose ring Nathalie’s appearance is striking.

And as a hairdresser, how good are you?

‘I’m very good. If there is something I can be proud of, something I’m really good at it’s customers and dealing with hair. It is something I feel confident about. I know you can wake me up in the middle of the night and I can do a cool hairstyle. I can do it with my eyes closed. This is what I want to do and what I like to do.’

Natalie is the child of two Yugoslavian immigrants, who moved to Sweden to find work. She was born in Sweden, but learned a lot about their culture while she was growing up. She speaks the

language, eats the food and likes talking about the country. ‘My dad is from Serbia and my mum is from the part near Hungary. It is a small area, also in Serbia.’ When talking about Yugoslavia, her voice softens. ‘You know, I don’t like to call it Serbia. Just after the war people would ask you where you are from and if you said ‘from Yugoslavia’, they would accept it. Now they always ask “which part do you come from?” I don’t like that. It is so negative, because to me it doesn’t matter to me, or to my parents either. Before people didn’t know where Croatia or Bosnia was.’

Why do you say Yugoslavia?

‘Serbia sounds so harsh. The country my parents grew up in has been split up by war. And because Milosovic is from there.’

So you could say you have Europe in you?

‘That is very interesting question. I guess I would say Swedish, if someone asked me randomly. I was born in Sweden. But when I am in Belgrade, when I stay in my parents’ apartment there, I don’t feel Swedish at all. I feel mixed.’ She thinks for a moment. ’My Serbian background is dear to me. I was talking to my mum about this the other day. If we marry Swedes, my brother and I will be the last generation to have this culture. Even though we can try to keep it, it will be hard.’

Swedish people are known for being somewhat distant and reserved. Do you think the high immigration rates here in Sweden will change Swedish society?

‘I think it is already changing. Now customers are hugging each other and kissing when they meet. I guess it is changing because of all the different cultures we have nowadays.’

What do you think about Europe?

‘We know so much more about Europe, compared to other world parts. I love it that you can be in a totally different country within a day, with all the differences and similarities. While if you go to Australia, you see the same landscapes, the same kangaroos.

Is the EU a good thing?

I think it is good. When we were allowed to vote about the EU, a couple of years ago, I voted for it. But now we have had it for a couple of years and I read about it in the newspaper, I think it is good. Uniformity is a good thing, the same rules should apply to all. And politicians should… what’s the word?’ She asks a lady, a client, who had just entered the shop, in Swedish. ‘Cooperate,’ she says. ‘Thank you,’ Natalie says, ‘cooperate more.’

And maybe we could use more European symbols, like the Eurovision Song Contest, don’t you think

‘And soon we will have a book called Youropeans,’ she says.

I told you she was smart…