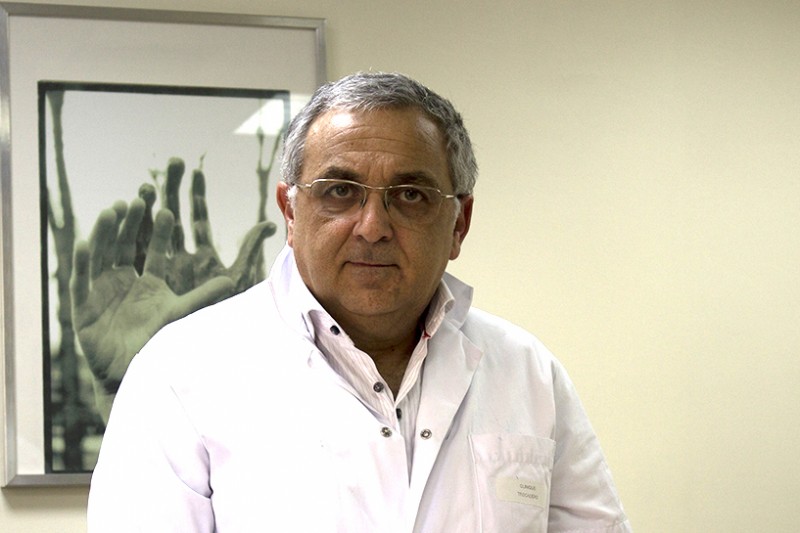 ‘I have two specialties: I’m an orthopaedic surgeon, surgery on bone, joints and muscles. And in the US I trained for my other specialty: hand and microsurgery.’
‘What is microsurgery?’
‘When you cut a nerve or an artery in the hand, you need a microscope to do the repair,’ Serge says.
We are in his Clinic de la Main, a hand clinic. Slowly and clearly he explains his work to me, as if he were telling a patient how he planned to carefully amputate a thumb. His clinic is in Trocadero, in the 16th, the posh part of town.
‘Are you good?’
‘So far, so good. I’ve been in private practice for 18 years and I have patients all the time, and if I wasn’t they wouldn’t come anymore. The older I get, the more confident I have become – but I still keep a critical eye on myself. It’s not about technique anymore, but about making the right choice: is this the best treatment for this patient? A 20-year old model has different needs than an 80-year old granddad. You know, without hands it’s very difficult to live. To go to the toilet, to wash your own body, to feed yourself, to dress yourself.’ And he talks about the hand, about all its different aspects – something he could probably do for hours.
‘Are hands the first thing you look at when you meet someone? ’
‘Yes, immediately.’

I try to hide mine. I have some nasty scars, souvenirs of my wilder days.

‘Ah, hands are so important,’ the doctor says. ‘Women judge shoes and hands. When a boy and a girl meet and the boy bites his nails, she won’t be attracted, it’s simple.’

‘You studied and worked in France and the US. But what do you know about other countries?’
‘A bit about the UK, Germany, Belgium. And I must say that they have a very high level of competence. I think that in Europe – Western Europe – doctors are better than in the US, even though there is more money there. The American doctors are too technical, don’t interact with their patients, they simply won’t talk with them, while we think that contact between patient and doctor is very important. They are afraid, because they might be sued if they do something wrong. We are more humane, I think. I remember being quite upset when I heard that my secretary would turn away people without insurance.’
‘Do you treat people who won’t pay you?’ When I interrupt him, the doctor looks rather disapprovingly at me.
‘It depends. But I would send them to a public hospital, not just send them off. You know, we doctors are always complaining that our rates don’t rise as much as the cost of living , but hey, we’re not that poor, even though the government tries to make our lives miserable.’
‘They’re not your friends?’
‘No, they have all these infantile rules, these insane taxes. It drives me crazy.’
‘Does it matter which government is in charge, left or right?’
‘No! It’s all the same.’ He slams his fist on the table – let’s hope the doctor doesn’t break his hand. ‘In France there is a cancer and it’s called l’ENA, the national school of administration. They all go there, all these future top politicians and chiefs of state-owned companies. They all become friends there, and at the end of school they choose: some go to the right, others to the left. In 1789 we cut the neck of the nobles, but today they are the new damned nobles. The English are smarter: they kept their king, but they are very democratic. Here, no.’
‘But aren’t you, as a doctor, on the same social level? You meet them, you play golf with them?’
‘No, they hate us doctors, because they can’t control us. The EU, same bullshit. You know what was one of their first laws? How many sardines are allowed in a can. And last month they decided how many litres are allowed to flush the toilet. Would you believe it!? They want the same laws for all of us and that’s utter bullshit.’ Serge is definitely not a Europhile. ‘The EU is a very bad thing. There are 40 countries involved, the 28 members plus a handful of observer countries and most don’t have our level of education or work. But we have to carry them, those people from Romania, Bulgaria and Lithuania. A couple of countries are pulling the EU train and the other countries just follow, slowing it down, acting as ballast. We are not the same. In ‘54 the 6 founding countries wanted to form the united states of Europe. But it’s impossible! The Soviet Union was so powerful because it was a tyranny and the US, on the other hand, are reigned and united by their only god, the dollar. And in the middle there is Europe, being democratic and mindful of human rights etcetera. These values don’t help to create a united Europe.’

He stops for a minute for a sip of water.

‘More and more people are talking about leaving the Euro or the EU; not so long ago that was unthinkable. In the beginning it was a good idea. But it’s failing.’
‘Isn’t there a solution?’
‘No.’